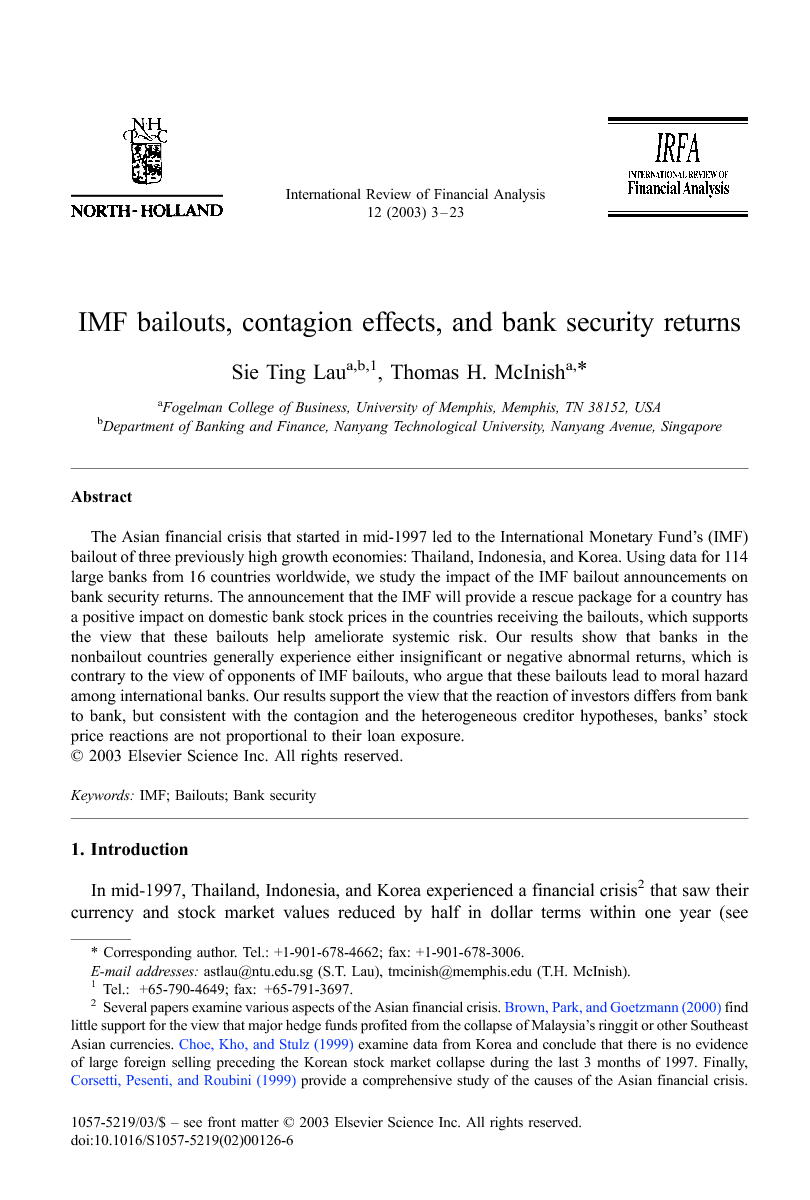 The Asian financial crisis that started in mid-1997 led to the International Monetary Fund's (IMF) bailout of three previously high growth economies: Thailand, Indonesia, and Korea. Using data for 114 large banks from 16 countries worldwide, we study the impact of the IMF bailout announcements on bank security returns. The announcement that the IMF will provide a rescue package for a country has a positive impact on domestic bank stock prices in the countries receiving the bailouts, which supports the view that these bailouts help ameliorate systemic risk. Our results show that banks in the nonbailout countries generally experience either insignificant or negative abnormal returns, which is contrary to the view of opponents of IMF bailouts, who argue that these bailouts lead to moral hazard among international banks. Our results support the view that the reaction of investors differs from bank to bank, but consistent with the contagion and the heterogeneous creditor hypotheses, banks' stock price reactions are not proportional to their loan exposure.

In mid-1997, Thailand, Indonesia, and Korea experienced a financial crisis2 that saw their currency and stock market values reduced by half in dollar terms within one year (see Appendix A). To ameliorate and reverse the crisis, the governments of these countries implemented measures such as the de-pegging of currencies from the US dollar. All these efforts failed. Consequently, on 11 August 1997, the International Monetary Fund (IMF) announced a US$17 billion rescue package for Thailand. Two months later, on 31 October 1997, the IMF announced a package of US$42 billion for Indonesia. Finally, on 3 December 1997, the IMF announced its biggest ever rescue package of US$55 billion for Korea. The IMF imposed conditions on the use of its funds and advocated programs for economic reforms. There have been debates about the appropriateness of the IMF proposals (see Sachs, 1998). Opponents of IMF bailouts, for example, argue that these bailouts lead to moral hazard among international banks since they know that they will be bailed out in the event of a crisis. On the other hand, proponents of IMF bailouts argue that bailouts are necessary to prevent systemic risk among banks. In this study, we examine the impact of the announcement of these bailouts on bank stock prices in 16 countries. Our sample includes the largest banks in Australia, Hong Kong, Indonesia, Japan, Korea, Taiwan, Thailand, and Singapore, and 35 international banks from North America and Europe with operations in Asia. The examination of such a diverse sample allows us to ascertain how investors in different countries reacted to the IMF rescue packages. We find that investors in Thailand, Indonesia, and Korea reacted favorably to the announcement, producing at least one day in each country with returns of more than 5%. We do not find a positive abnormal return for most of the other Asian and international banks. We also test for the presence of bank contagion during this crisis period. Contagion refers to the case in which an event impacts banks generally and is not confined to banks facing particular problems such as insolvency and bankruptcy. Contagion is related to systemic risk in which a run on one bank might lead to runs on other banks. Our results support the hypothesis of contagion. Although the IMF has previously bailed out other economies, with the exception of Kho, Lee, and Stulz (2000) and Kho and Stulz (2000), there have been no prior studies of the effects of IMF bailouts on bank returns. Kho et al. (2000) examined the impact on US bank stock returns of the emerging market currency crisis and bailout. Using announcement dates from the IMF bailout of Mexico, Korea, and Brazil, they found that the bailout of these countries benefited banks with exposure to the bailed out country. Kho and Stulz used banking industry indices from 10 countries and bank stock prices of three large US banks (Chase, Citicorp and JP Morgan) to study the impact of the Asian crisis on bank stocks. They found that Western banks experienced positive returns for the second half of 1997, whereas East Asian banks incurred losses in excess of 60%. They also examined the impact of the announcement of the Korean IMF bailout on bank stock returns and found that the bailout is positive for banks in all countries except those without exposure to Korea. Our paper differs from Kho et al. (2000) in that we looked at bank stock returns from 16 countries where they examined US bank stock returns based on the equally weighted Datastream Banking index. Our paper also differs from Kho and Stulz (2000) in that they also used bank stock indices rather than individual bank stock returns and we used multiple event dates. The remainder of this paper is organized as follows. Section 2 describes the data and event date. Section 3 contains the hypotheses, test design, and empirical findings on stock price response across banks. Section 4 deals with the investigation of contagion. The final section provides a summary and conclusions.

In mid-1997, a financial crisis in Asia led the IMF to bail out three previously high growth economies: Thailand, Indonesia, and Korea. Using data for 114 large banks from 16 countries worldwide, we studied the impact of the announcements that the IMF will provide a rescue package on bank stock returns. We found that there is a positive impact on bank stock prices in the country receiving the rescue package, which likely reduces the systemic risk in bailout countries. With the exception of a few cases, international banks in Japan, the United States, France, Germany, and the United Kingdom experienced negative abnormal returns at the time of the bailout announcements. Thus, we found little evidence that the typical international bank benefited from the bailouts. This finding is contrary to the view of some opponents that these bailouts lead to moral hazard in international lending. We used data on loans of individual banks to each of the countries receiving bailouts to investigate whether individual banks stocks reacted differently based on their loan exposure. Kho and Stulz (2000) singled out the Korean IMF announcement as affecting banks across countries and benefiting US banks with large exposures. Our results showed a statistically significant reaction to the Korean announcement only for Bankers Trust and the overall reaction of US bank stocks to the Korean announcement was not statistically significant. The Korean announcement did significantly affect banks in Japan, Australia, Hong Kong, and Switzerland. We found that the Indonesian announcement had a more significant effect on US banks and also affected banks in Japan, Hong Kong, Taiwan, France, Germany, and the United Kingdom. While the Thai announcement did not affect US banks, it did affect banks in Japan, Australia, Taiwan, Germany, and the United Kingdom.