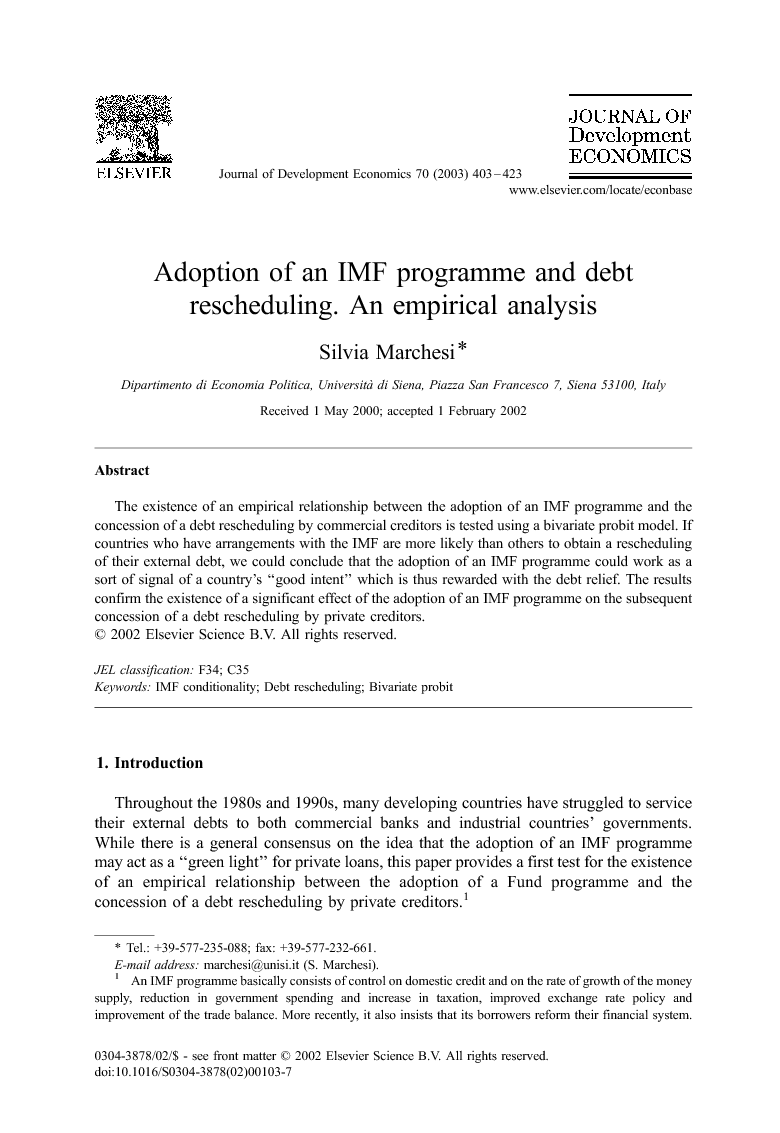 Throughout the 1980s and 1990s, many developing countries have struggled to service their external debts to both commercial banks and industrial countries' governments. While there is a general consensus on the idea that the adoption of an IMF programme may act as a “green light” for private loans, this paper provides a first test for the existence of an empirical relationship between the adoption of a Fund programme and the concession of a debt rescheduling by private creditors.1 In the early 1980s, Paris Club creditors provided reschedulings for low-income countries on nonconcessional terms and on market-related interest rates. In the late 1980s (1989–1994), the Brady deals addressed commercial bank lending to sovereign debtors (generally middle-income countries) and involved a combination of an IMF agreement and debt-service reduction and rescheduling from commercial banks. In the same period, Paris Club creditors agreed to provide low-income countries with concessional reschedulings, conditional on the adoption of an IMF adjustment programme, under the Toronto (1988), Trinidad (1990), Naples terms (1994) and, more recently, the World Bank and the IMF have implemented the HIPCs Debt Initiative (1996).2 At the end of the 1990s, the Fund has been involved in the East Asian financial crisis. It still seems the case that the acceptance of a Fund agreement acts as a signal of the country's intentions which reassures the market and in turn makes commercial creditors more willing to accord rescheduling of a country's debt. The rescheduling process allows debtors not to default on their loans and to remain in the international financial system. It also prevents creditors from facing the whole consequences of a financial crisis. More specifically, it can be considered as a form of “debt reorganisation”, in which payments falling due in a specified interval, are deferred for repayment on a new schedule, following negotiations between creditors and debtors. Since a rescheduling is a postponement of principal and interest payments, creditors would like to have some “guarantee” that this postponement will in fact contribute to an improvement in the economic conditions allowing the debtor country to service its external debt. The adoption of an adjustment programme supported by the IMF could reassure a country's creditors on this respect. In the literature, two separate streams of research have independently identified the factors which affect the probability of an arrangement with the IMF and the probability of obtaining a debt rescheduling but there is no paper where the two events are combined. Marchesi and Thomas (1999) present a theoretical model where the agreement to follow an IMF programme can be a signal of an indebted country's willingness and ability to successfully reform (and use any new money provided for investment rather than consumption purposes), which is thus rewarded with a debt relief. From the conclusions of this article stem the main idea of this work. In this paper, we test for the existence of a significant effect of the adoption of an IMF programme on the subsequent concession of a debt rescheduling by commercial creditors, using a bivariate probit model to control for the endogeneity of the choice “IMF adoption”. More specifically, we estimate a bivariate probit model for the joint determination of a Fund programme adoption and of the debt rescheduling, conditional on the adoption. We find that countries that have arrangements with the IMF are more likely to obtain a rescheduling of their external debt. This evidence therefore suggests that the adoption of an IMF programme can work as a signal of a country's “good intent”, which is rewarded with the debt relief. In Section 2, we provide some background to the empirical studies on the determinants of both Fund arrangements and external-debt repayment performance. In Section 3, we briefly describe the theoretical framework, while Section 4 develops the empirical one. Section 5 presents the results and, finally, Section 6 concludes.

The results of this paper confirm that the adoption of an IMF programme (and the conditionality that goes with it) can work as a signal of a country's good behaviour and may, therefore, induce private creditors to concede a rescheduling of the country's external debt. Our estimates of a bivariate probit model, which is used to control for endogeneity, assigns a positive and significant value to the coefficient of the dummy “IMF adoption” in the equation which determines the conditional probability of a debt rescheduling.