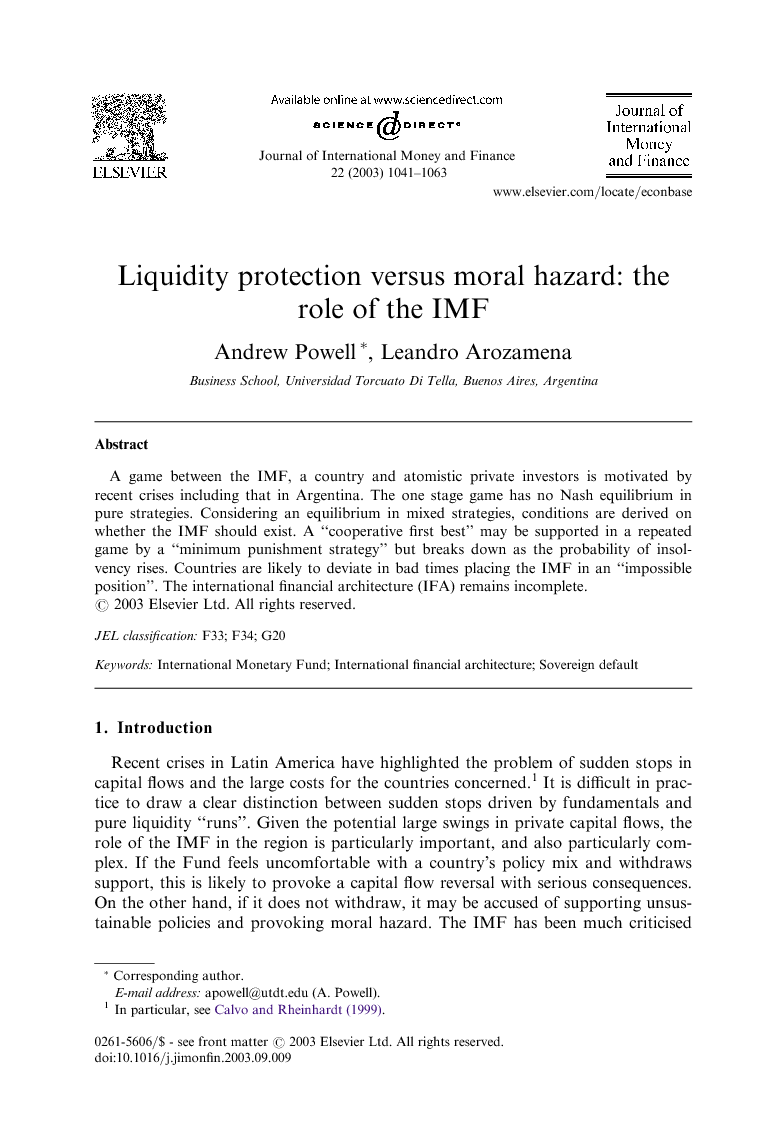 A game between the IMF, a country and atomistic private investors is motivated by recent crises including that in Argentina. The one stage game has no Nash equilibrium in pure strategies. Considering an equilibrium in mixed strategies, conditions are derived on whether the IMF should exist. A “cooperative first best” may be supported in a repeated game by a “minimum punishment strategy” but breaks down as the probability of insolvency rises. Countries are likely to deviate in bad times placing the IMF in an “impossible position”. The international financial architecture (IFA) remains incomplete.

Recent crises in Latin America have highlighted the problem of sudden stops in capital flows and the large costs for the countries concerned.1 It is difficult in practice to draw a clear distinction between sudden stops driven by fundamentals and pure liquidity “runs”. Given the potential large swings in private capital flows, the role of the IMF in the region is particularly important, and also particularly complex. If the Fund feels uncomfortable with a country’s policy mix and withdraws support, this is likely to provoke a capital flow reversal with serious consequences. On the other hand, if it does not withdraw, it may be accused of supporting unsustainable policies and provoking moral hazard. The IMF has been much criticised of late but there is less analysis of the strategic problem the Fund faces in attempting to support good policies versus the repercussions of the Fund withdrawing on large and volatile private capital flows. Broadly speaking, there are two schools of thought. The “moral hazard school” stresses the perverse incentive problem created by insurance type interventions in capital markets. Adherents point to the sheer size of IMF led packages, the low emerging country spreads after the Mexican 1995 rescue and stress the idea that countries might consider packages as substitutes to safer policies or reform. A second school, we name the liquidity school, stresses a set of failures in capital markets; asymmetric information between lenders and borrowers and coordination failures between lenders giving rise to problems including multiple equilibria. According to this view, financial markets are inherently unstable. An IMF promise of liquidity may then solve lender coordination problems and eliminate the incentives for investors to “run”.2 These two schools appear difficult to reconcile but in this paper a simple model is developed that encompasses both. Runs may be a result of fundamental or pure liquidity concerns although, at the time of the run, it is not known which. The IMF can provide protection against pure liquidity runs but at the cost of moral hazard. It is suggested that, as both schools are right, it is precisely the tension between them that makes the task of the IMF so difficult. To a large extent, the model and the discussion are motivated by events in Argentina leading up to the crisis at the end of 2001. The tension between the moral hazard school and the liquidity school was particularly evident. Given the policies adopted in Buenos Aires, the Fund became uncomfortable with continuing support (moral hazard), but there was also an acute awareness that withdrawal would provoke a liquidity run, devaluation and default—the crisis that Argentina was precisely trying to avoid (liquidity protection). With a major IMF led support package in place at the end of 2000, Argentina implemented more risky policies aimed at reviving the real economy but with a decreasing probability of success—these policies included a subsidy plan for exports and relaxing banking regulations in an attempt to implement active monetary policy under the currency board.3 In March 2001, with the resignation of the second economy minister in as many months, there is a strong argument that the IMF had a decision to make either support strongly or withdraw. But the perception was that the IMF vacillated. Policy developments in Argentina were assessed in terms of whether they would lead to IMF withdrawal. The implementation of an ingenuous system of export subsidies and import tariffs, raised the fear that this might be interpreted by the IMF as a dual exchange rate regime and hence provide the excuse to end the program.4 This helped provide the trigger for a bank run. The run was halted by the IMF package of August 2001. However, the economy continued to deteriorate, tax revenues fell, IMF targets became unrealistic and depositors speculated again that the IMF would withdraw. A final run sparked a set of bank controls in early December. This sequence of events backs up the assumption that the IMF plays a significant coordinating role. Moreover, it supports the conclusions of the analysis, that with an IMF program in place, Argentina had incentives to adopt more risky policies as the situation deteriorated (moral hazard) and that the IMF responded by vacillating between continuing support or withdrawing. The analysis also suggests that the international financial architecture (IFA) remains incomplete. The theoretical model is used to consider recent proposals such as collective action clauses (CACs) and a bankruptcy procedure for countries (Sovereign Default Restructuring Mechanism, SDRM). The paper is organized as follows. In Section 2, a simple one shot game is outlined. In Section 3, we consider a repetition of the game and address the uniqueness problem by showing that in a region of parameter values the optimum policy for the Fund is a type of “minimum punishment strategy”. Section 4 concludes.