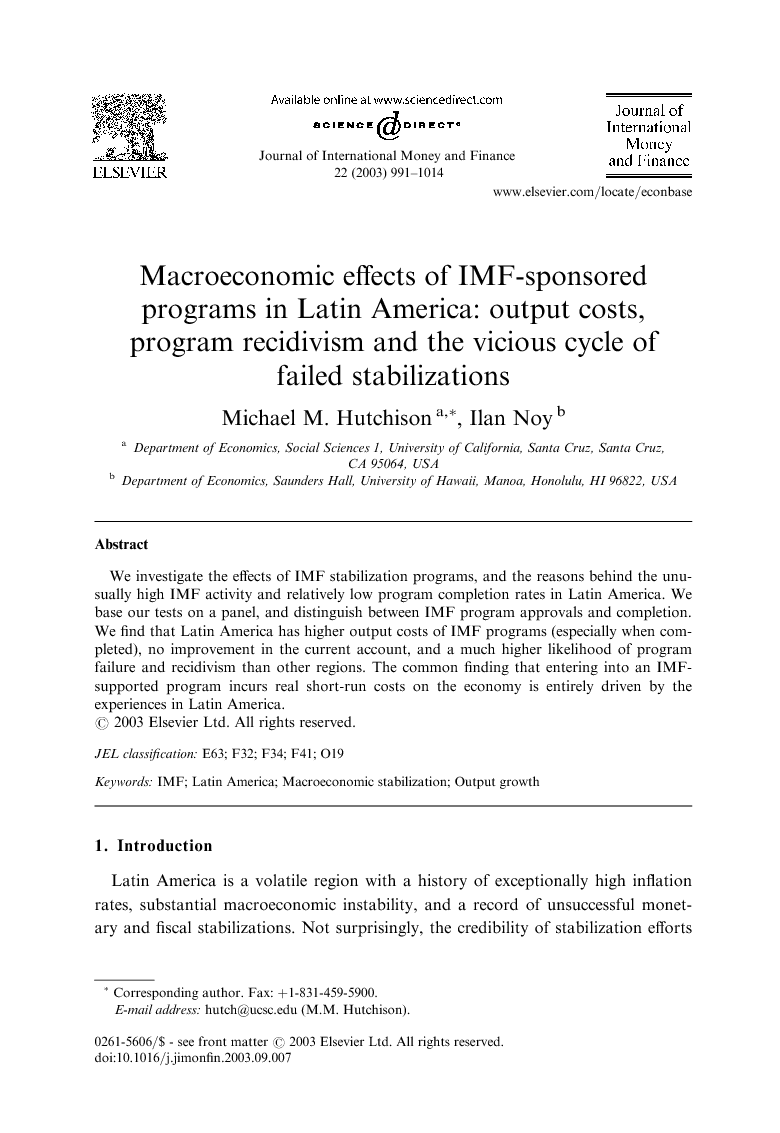 We investigate the effects of IMF stabilization programs, and the reasons behind the unusually high IMF activity and relatively low program completion rates in Latin America. We base our tests on a panel, and distinguish between IMF program approvals and completion. We find that Latin America has higher output costs of IMF programs (especially when completed), no improvement in the current account, and a much higher likelihood of program failure and recidivism than other regions. The common finding that entering into an IMF-supported program incurs real short-run costs on the economy is entirely driven by the experiences in Latin America.

Latin America is a volatile region with a history of exceptionally high inflation rates, substantial macroeconomic instability, and a record of unsuccessful monetary and fiscal stabilizations. Not surprisingly, the credibility of stabilization efforts with the public is low, making the task of successfully implementing new stabilization programs very difficult. Latin American countries are also the most frequent users of IMF loans and associated IMF-supported stabilization programs (Table 1). These programs’ primary official objective is to restore balance of payments equilibrium and, in this context, IMF loans are granted (and the funds disbursed incrementally) conditional upon specific macroeconomic and other criteria being met.1 Table 1. Program approval Short-term programs Long-term programs Programs per country SBA EFF Full sample 760 57 100 6.8 Latin America 284 22 11 11.7 Asia 101 9 13 6.8 Middle East 33 4 0 5.3 Africa 229 17 72 7.2 Other 113 5 4 3.2 All IMF programs (for all countries) since 1952 which ended by December, 1999 are included. Short-term programs include Stand-By Arrangements, Extended Stand-By Arrangements (SBAs) and Enhanced Fund Facilities (EFF). Long-term programs include structural adjustment facility and enhanced structural adjustment facility. Table options This study investigates the macroeconomic effects of IMF-supported stabilization programs in Latin America, relative to other parts of the world, focusing in particular on output growth and balance of payments adjustment. We also consider the reasons behind the unusually high IMF program activity in Latin America, relatively low program completion rates, and how these characteristics may be associated with macroeconomic instability and the history of failed macroeconomic stabilizations in the region. There is considerable debate over the effects of IMF-supported stabilization programs but no consensus has emerged about the macroeconomic impact of these programs.2 Most empirical studies using panel data sets and regression techniques find that IMF-supported programs improve the balance of payments and the current account, but views on the ultimate output and employment effects are much more divergent.3 Studies measuring the output costs of IMF-program participation have reached radically different conclusions—with estimates ranging from sizeable declines in output growth (e.g. Przeworski and Vreeland, 2000), to little or no adverse output effects (Hutchison, 2002 and Hutchison, 2003), to quite strong positive output ef fects (e.g. Edwards and Santaella, 1993 and Dicks-Mireaux et al., 2000).4 To our knowledge, no study has specifically focused on the output and current account effects of IMF-supported programs for Latin America over the past two decades. In an early unique contribution, Pastor (1987) considered IMF programs in Latin America in 1960–1981 (using developments before/after program participation, as well as differences between years when countries were in and out of programs, as the benchmarks), and concluded that the current account and output effects of programs were inconclusive. He found, however, systematic reductions in the labor share of income following IMF programs.5 The absence of recent work in this area is surprising, since Latin America is the region of the world where the IMF has been most active and macroeconomic volatility greatest. To address this gap in the literature, this study addresses five main questions. First, does participation in an IMF-supported stabilization program tend to make real GDP growth weaker? Second, what is the average impact of an IMF program on balance of payments adjustment? Third, does there appear to be differential effects of IMF programs in Latin America compared with the rest of world? Fourth, are there differences in the macroeconomic outcomes between countries that fully complete IMF programs, never withdraw funds (using the IMF program as a “precautionary” contingent source of funds) and those that have programs approved but are not fully completed? Fifth, does the poor completion record of IMF programs in Latin America affect their macroeconomic performance during program participation? In addition to our focus on Latin America, we introduce several methodological innovations. The estimation methodology employed to investigate real growth ef fects of IMF programs is the standard General Evaluation Estimator (GEE). However, we introduce a “matching” procedure into the analysis to control for selection bias (countries self-select into IMF program participation), and argue that Heckman’s (1979) Inverse Mills Ratio (IMR) statistic does not appear to ad equately address this point. We also control for the occurrence of recent currency/balance of payments crises and “sudden stops” in capital flows associated with currency crises, and test for interaction effects between these events and subsequent participation in IMF programs. This allows us to answer the question: Is the ad verse output effect of a currency crisis and/or a reversal in capital flows in Latin America made worse when the IMF steps in with a stabilization package? Another innovation is that we distinguish between IMF program approvals and successful completion of IMF programs in measuring macroeconomic effects. This is es pecially important for Latin America, since the majority of programs are not successfully completed. Our econometric tests are based on panel data set (67 countries over the 1975–1997 period) with country-specific effects. Section 2 presents a short description of IMF programs and statistics on the number and completion rates of programs in Latin America and elsewhere. We also discuss the frequency that Latin American countries enter into new programs (recidivism). Section 3 discusses the methodology and data. Section 4 reports the primary empirical results of the study. This section presents estimation results of the “reduced form” output and current account equations with explanatory variables that include currency crises and IMF program participation. Section 5 interprets the main results of the study against the background of the recent literature on macroeconomic instability, the link between failed stabilizations and lack of policy credibility, and the determinants of IMF program completion and recidivism. Section 6 concludes the paper.