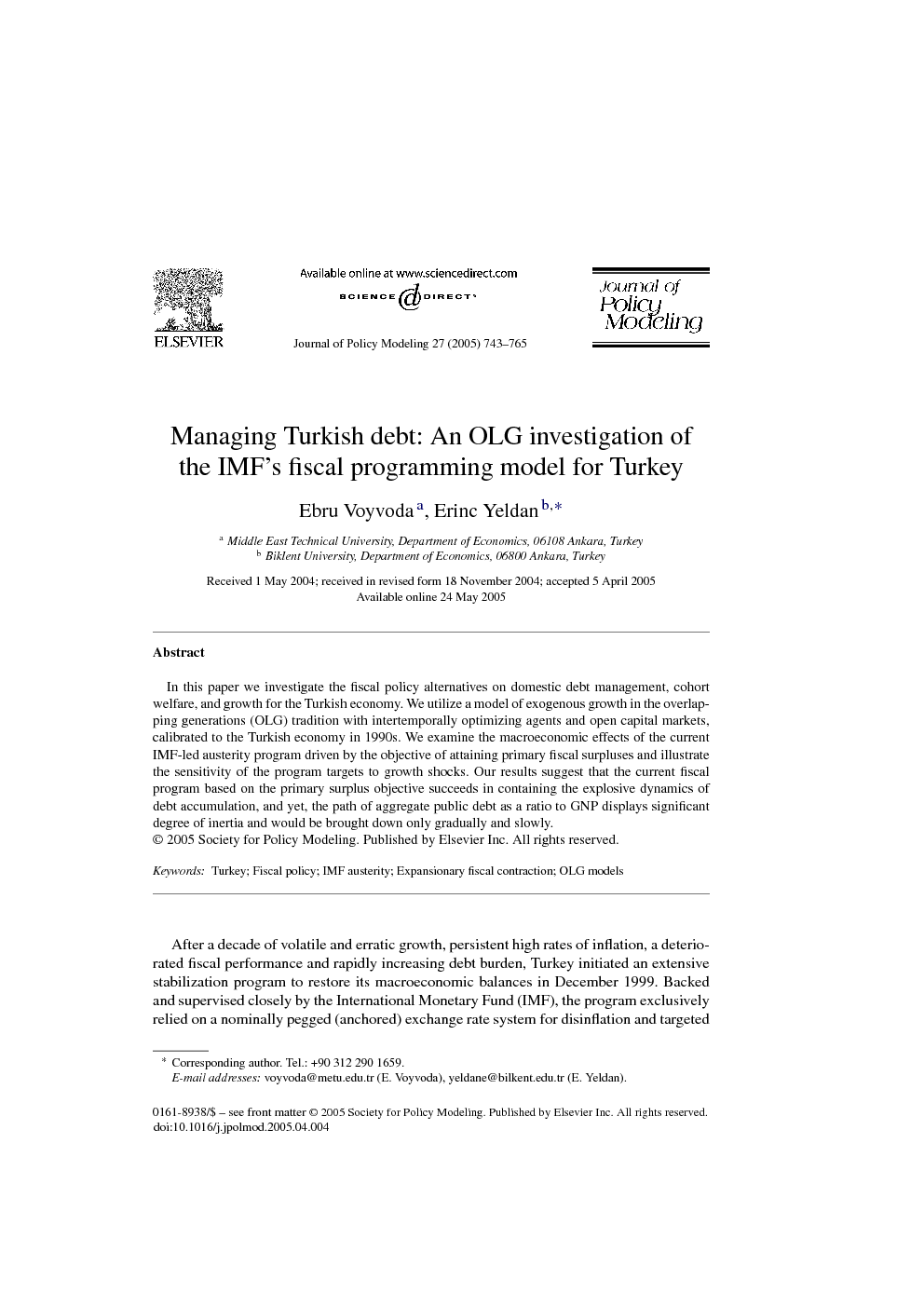 In this paper we investigate the fiscal policy alternatives on domestic debt management, cohort welfare, and growth for the Turkish economy. We utilize a model of exogenous growth in the overlapping generations (OLG) tradition with intertemporally optimizing agents and open capital markets, calibrated to the Turkish economy in 1990s. We examine the macroeconomic effects of the current IMF-led austerity program driven by the objective of attaining primary fiscal surpluses and illustrate the sensitivity of the program targets to growth shocks. Our results suggest that the current fiscal program based on the primary surplus objective succeeds in containing the explosive dynamics of debt accumulation, and yet, the path of aggregate public debt as a ratio to GNP displays significant degree of inertia and would be brought down only gradually and slowly.

After a decade of volatile and erratic growth, persistent high rates of inflation, a deteriorated fiscal performance and rapidly increasing debt burden, Turkey initiated an extensive stabilization program to restore its macroeconomic balances in December 1999. Backed and supervised closely by the International Monetary Fund (IMF), the program exclusively relied on a nominally pegged (anchored) exchange rate system for disinflation and targeted a series of austerity measures and structural reforms to restore the fiscal balances. Yet, just eleven months after launching the disinflation program Turkey experienced a severe financial crisis in November 2000, and finally declared the surrender of the pegged exchange rate system on February 2001. The stock markets, employment, production, finance, and the Turkish lira went into a downward spiral and the gross domestic product shrunk by 7.4% over 2001, the worst performance since World War II. In response to the crisis, and in order to reinvigorate the now-stalled free market reforms, a new standby agreement was signed with the IMF.1 The 2001 program, hailed as the Turkey's Program for Transition to a Strong Economy (TSEP) included the conventional IMF austerity measures: drastic cuts in public spending, monetary contraction, flexible exchange rate management, and reductions in wage remunerations and in public employment. In particular, the TSEP has targeted a primary fiscal surplus of 6.5% to the GNP every year until 2006, and aimed at reducing the outstanding net stock of debt to 63.9%, by the end of that year. It has foreseen a real rate of growth of 5% for 2003, 2004, and 2005, and assumed an operative nominal rate of interest of 46% for 2003, 32.4% for 2004, and 27.4% for 2005. The targeted end-of-year inflation of the wholesale prices has been set at 16.2%, 12%, and 8% for the same years, respectively. Thus, the Program implicitly assumes a significant real rate of interest through its implementation. The main motivation of the program was to reduce the fiscal repression in the commodity and asset markets. This, in turn, was observed to be the result of high costs of servicing the public debt, often at exorbitant interest rates. Thus, the program primarily aimed at providing a signal of confidence both to the domestic and international community suggesting that the Turkish fiscal authorities are adhering to the “proper mix of stabilization measures”. The program identified the public budget primary surplus (net of interest costs) as a ratio to the GNP as the most crucial indicator of this confidence game. According to the program's officially stated rationale, as the non-interest expenditures are reduced and the primary surplus target (of 6.5% to the GNP) is attained, real rate of interest would fall, converging to its international counterparts. The fall in the real rate of interest would then stimulate private consumption and investment, fueling growth through a virtuous mechanism of crowding-in. Traditionally, the Fund's stabilization policy advice is criticized based on its implementation of an inappropriate mix of austerity measures to correct for balance of payments difficulties. Often the Fund comes under criticism that it has a dogmatic preference for fiscal prudence, often ignoring the likely negative implications for economic growth, as well as the deterioration of income distribution, regressing the living conditions of the poor and the marginalized. The current program put into operation in Turkey, on the other hand, claims a pro-growth twist. Accordingly, the severe cuts in non-interest expenditures would reduce the interest rates and would be expected to generate growth through the above narrated mechanisms of crowding-out in reverse, a mechanism which can be identified with a non-conventional phrase: expansionary fiscal contraction. Thus, the current IMF-led austerity program in Turkey provides a crucial test on the expansionary attributes of such fiscal contraction, and will likely have a major impact on the Fund's credibility in its capacity as a policy advisor (and as the international lender of last resort) in the age of new financial architecture. Mostly based on these motivations, many researchers and financial rating agencies conducted a series of programming exercises to monitor the Turkish fiscal sustainability and its debt burden in the short- to medium-run. However, such exercises are often restricted to a partial adjustment framework, and do not go beyond an accounting check between the real rate of growth of the GNP, the interest rate, and the debt to GNP ratio. In fact, what is perhaps most notably lacking in these exercises is a general equilibrium framework where all macroeconomic variables are resolved in a consistent (Walrasian) system of flow equations describing production, expenditures on consumption and investment both by the private and the public sectors, savings and asset accumulation, foreign economic relations, and fiscal balances together with debt dynamics. In this paper we develop an overlapping generations (OLG), small open economy model of exogenous growth and study the effects of fiscal policies of the government under the constraints of debt servicing and a binding fiscal gap. The model developed has an OLG structure with 30 generations at any moment, optimally choosing lifetime consumption and saving paths. The growth process is characterized by the accumulation of physical capital and by labor augmenting technological progress. We focus on two sets of issues: First, the model is calibrated to generate the approximate macroeconomic panorama of 1990s for the Turkish economy. We then study the specifics and the expected macroeconomic consequences of the current austerity program, TSEP, as implemented under close IMF supervision. Next, we investigate the adjustment patterns of the model economy under various growth shocks, focusing on macro variables such as production, investment and growth, as well as economic welfare across generations. The paper is organized as follows: in the next section we provide a broad overview of the Turkish economy over the 1990s. Next, we discuss some of the key elements of the IMF's fiscal sustainability programming exercises, and highlight some of the recent studies in the Turkish literature as pertain to our analysis. The algebraic set up of the model is introduced in Section 3. In Section 4 we implement our policy simulation exercises. Section 5 summarizes and concludes.

In this paper, we studied the welfare and growth implications of the Turkish fiscal austerity program as directed and supervised by the IMF. The program, referred as the “Turkey's Transition to a Strong Economy”, was advanced in May 2001 and extended to be in operation at least until 2006. The program is criticized heavily in that it gives priority to targets on fiscal debt rather than growth, and implements an implicit preference for finance over industry. Furthermore, the program is accused of lacking credible public support and of general ignorance on its social welfare implications. In an attempt to investigate the growth and welfare consequences of the current austerity program, as well as its sensitivity (vulnerability) to various technological shocks, we have taken a general equilibrium framework and utilized and OLG model of growth, calibrated to Turkish data over 1990s. Our results show that the path of aggregate public debt as a ratio to GNP displays significant degree of inertia and would be brought down only gradually and slowly. Moreover, checking for the vulnerability of the official program path to possible exogenous shocks on growth (technological change), we find that adherence to the given program targets on fiscal austerity immediately leads to a reversal of the path of the total debt/output indicator. In this case, the primary surplus that would be needed to keep the debt to GNP ratio at its officially planned path rises by at least two percentage points over the medium-run. These results deliberately raise concerns over the reliability of the hypothesis of expansionary fiscal contraction in the Turkish context. 16 Moreover, it remains a crucial question whether the Turkish economy will not only be able to absorb such a contraction of the public expenditures (especially public investments on social capital, including health and education expenditures) over such extended periods, but will be able to generate a sustained path of growth, in a country where historically growth has been dependent on public investments and the anti-poverty policies mostly relied on public social infrastructure.