عنوان انگلیسی
IMF programs: Who is chosen and what are the effects?
دانلود فوری مقاله + سفارش ترجمه 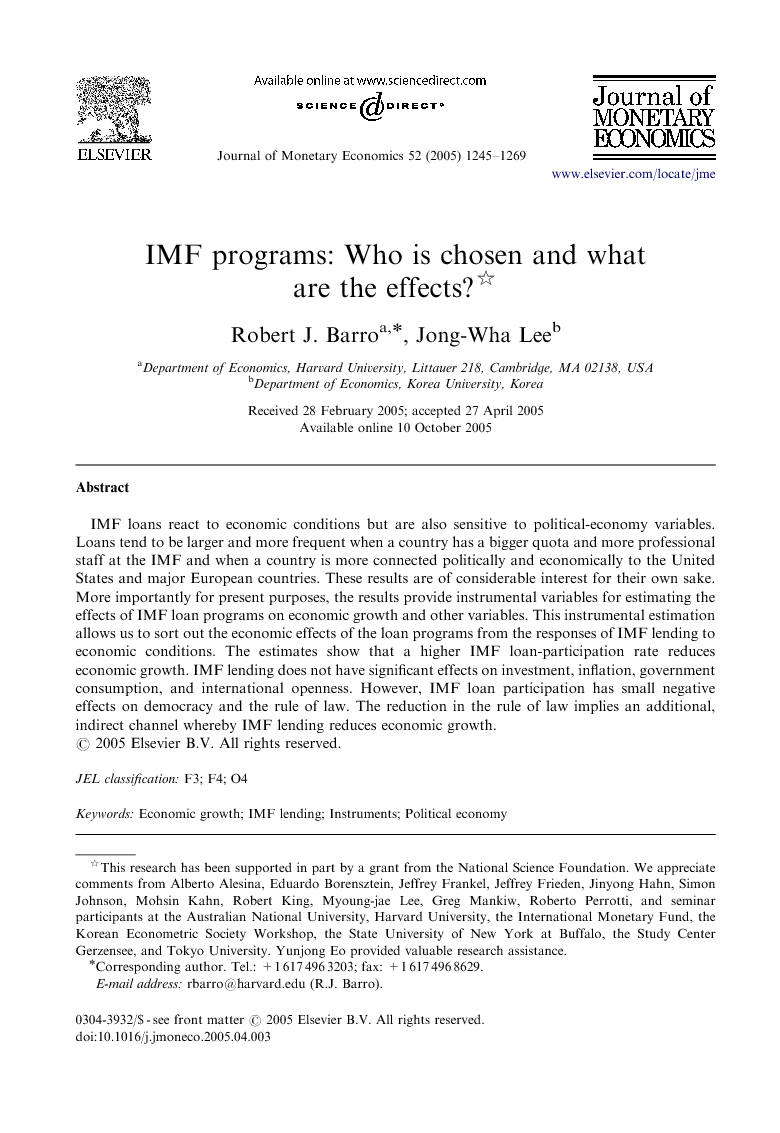 IMF loans react to economic conditions but are also sensitive to political-economy variables. Loans tend to be larger and more frequent when a country has a bigger quota and more professional staff at the IMF and when a country is more connected politically and economically to the United States and major European countries. These results are of considerable interest for their own sake. More importantly for present purposes, the results provide instrumental variables for estimating the effects of IMF loan programs on economic growth and other variables. This instrumental estimation allows us to sort out the economic effects of the loan programs from the responses of IMF lending to economic conditions. The estimates show that a higher IMF loan-participation rate reduces economic growth. IMF lending does not have significant effects on investment, inflation, government consumption, and international openness. However, IMF loan participation has small negative effects on democracy and the rule of law. The reduction in the rule of law implies an additional, indirect channel whereby IMF lending reduces economic growth.

In recent decades, many countries have participated in loan programs of the International Monetary Fund. In fact, almost all developing countries have received IMF financial support at least once since 1970. The few exceptions include Botswana, Iraq, Malaysia, and Kuwait. Given the broad reach of IMF loan programs, it is important to know the consequences of these programs for economic growth and other dimensions of economic performance. Do countries benefit from access to IMF loan programs or would countries be better off if these programs did not exist? The main difficulty in answering this question is that IMF loans tend to be made in response to economic problems. This response, akin to a doctor administering to a sick patient, tends to generate a negative association between IMF loan programs and economic performance. Obviously, it would be unfair to blame the IMF for these pre-existing bad conditions. Thus, to assess the economic effects of the loan programs, one has to sort out the directions of causation, that is, distinguish the economic effects of the loans from the effects of economic conditions on the probability and size of the programs. Similar issues arise in evaluating foreign aid, debt relief, and other programs that respond to the economic health of a country. To sort out the directions of causation, we would ideally observe experimental situations in which the IMF introduced a loan program without regard to a country's economic conditions. We try to approximate these sorts of experiments by taking a political/institutional approach to the IMF's decision-making. That is, we construct and use some political and institutional variables that, first, have substantial predictive value for IMF loan participation and, second, are exogenous with respect to economic performance. We then use these political and institutional variables to form instruments to isolate the effects of IMF loan programs on economic growth and other variables. The key innovation of our analysis is that we model the IMF as a bureaucratic and political organization. Loans are more likely to be approved and are likely to be larger when countries are more influential at the IMF. We gauge this influence by the size of a country's quota at the IMF and by the number of the IMF's professional staff that come from the country. We also consider each country's political and economic connections to the most influential members of the IMF, the United States and the major countries of Western Europe. To measure these connections, we use voting patterns in the United Nations and the extent of bilateral trade linkages. Our analysis shows that IMF loans are more likely to exist and to be larger in size when countries have larger quotas, more nationals on the IMF staff, and are more connected politically and economically to the United States and the major Western European countries. Considered as a whole, these political-economy variables have substantial explanatory power for IMF lending. Our political-economy analysis of the determinants of IMF loan programs is of considerable interest for its own sake. However, most importantly, this analysis generates the instrumental variables that we use to study the effects of these programs. We can reasonably argue that our instrumental estimates isolate the effects of the loan programs on economic growth and other variables. Overall, our results are not favorable for the economic role of the IMF. We find that, using our instrumental variables and holding fixed an array of other explanatory variables, greater IMF loan participation has a direct negative effect on economic growth. We also find that more participation and larger loans have small negative effects on democracy and the rule of law. The reduction in the rule of law provides another, indirect channel whereby IMF loan programs lead to lower economic growth.

We began with a political-economy approach to the IMF's lending decisions. Holding fixed a set of standard economic variables, the probability and size of IMF loans were larger when a country had a bigger quota, more nationals working on the professional staff, and more political and economic proximity to the United States and the major Western European countries. We measured political proximity by voting patterns in the U.N. General Assembly and economic proximity by bilateral trading volume. The set of political-economy variables was statistically significant overall for explaining the size of IMF loans, the frequency of participation in IMF lending programs, and the probability of IMF loan approval. This political-economy analysis of IMF lending practices is of substantial interest for its own sake. More importantly for present purposes, the results allow us to create instrumental variables to use to estimate the effects of IMF loan programs on economic outcomes. If we do not instrument, we find that the IMF loan–GDP ratio has a substantial inverse relation to economic growth in the contemporaneous 5-year period. However, the instrumental estimates indicate that the contemporaneous relation of the IMF loan–GDP ratio to economic growth is statistically insignificant. Thus, the apparent inverse relation likely reflects the endogenous response of IMF lending to weak economic conditions. In contrast, the instrumental estimates still show that the IMF loan-participation rate has a statistically significant negative influence on economic growth. Therefore, greater IMF program participation, rather than larger loans, seems to retard growth. We also analyzed the effects of IMF loan programs on other economic and political variables—investment, inflation, government consumption, international openness, democracy, and the rule of law. The most important result was a negative effect of IMF loan participation on the rule of law. This channel implies a further, negative indirect effect of IMF loan participation on economic growth. Our results do not explain what the direct negative effects of IMF loan participation on economic growth represent. We know that these effects do not derive from channels involving the explanatory variables that were held constant in the growth regressions shown in Table 7. However, the IMF may matter through channels involving additional variables. As an example, the moral hazard created by the potential for IMF loans may cause governments to spend excessively on public investment or transfers, which were not included in our government consumption variable. The IMF programs may also encourage inefficient behavior on the part of government bureaucrats. IMF conditionality may harm economies in ways not captured by the inflation rate and the other variables considered. For example, there may be effects on tax structure and regulations. Finally, IMF loan programs may influence the size and structure of private credit markets. These possibilities constitute promising avenues for future research. Finally, we end with something of a puzzle. Our results suggest that participation in IMF loan programs is bad for the economy, at least bad for economic growth. Why then do host governments choose to participate in IMF loan programs?25 Or, to put it more strongly, why do countries in politically favored positions—because of large quotas, large IMF staffs, and political and economic proximity to the IMF's main shareholding countries—use their clout to obtain IMF loans when these loans apparently retard economic growth? We have several possible answers. First, IMF lending may be bad for the economy but good for the governments and individual politicians who arrange the lending. Second, the IMF lending may lower real GDP but raise a country's income, which is augmented by the subsidy element of an IMF program. Third, IMF lending may lower growth in the short run but raise growth in the long run. However, our analysis fails to find the higher long-run growth at least over a 5-year horizon. Finally, there may be a time-consistency issue. A country may be better off if it can commit in advance not to participate in IMF programs (or, possibly, in foreign aid, and so on). However, ex post, the country may be better off accepting the assistance. We plan to address these issues in future research.