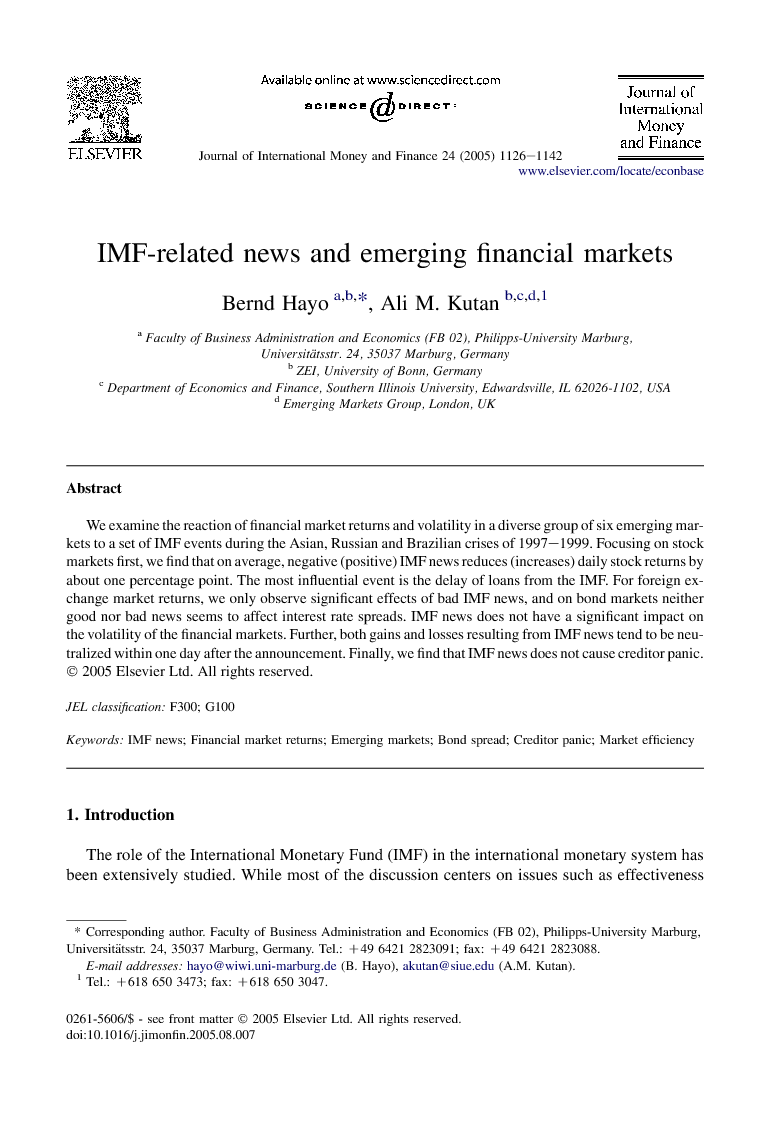 We examine the reaction of financial market returns and volatility in a diverse group of six emerging markets to a set of IMF events during the Asian, Russian and Brazilian crises of 1997–1999. Focusing on stock markets first, we find that on average, negative (positive) IMF news reduces (increases) daily stock returns by about one percentage point. The most influential event is the delay of loans from the IMF. For foreign exchange market returns, we only observe significant effects of bad IMF news, and on bond markets neither good nor bad news seems to affect interest rate spreads. IMF news does not have a significant impact on the volatility of the financial markets. Further, both gains and losses resulting from IMF news tend to be neutralized within one day after the announcement. Finally, we find that IMF news does not cause creditor panic.

The role of the International Monetary Fund (IMF) in the international monetary system has been extensively studied. While most of the discussion centers on issues such as effectiveness of IMF programs and IMF-induced moral hazard, little is known about the influence of the IMF as a source of news on financial markets. In this paper, we analyze the impact of various categories of IMF actions on emerging financial markets by studying the reaction of investors to announcements of IMF actions during the Asian, Russian and Brazilian crises of 1997–1999. IMF-related news has two possible roles to play in emerging financial markets. First, this news may convey some information to market participants, for instance, about the economic situation of a country, which was not known before. Second, it may give some indication to market participants of how the IMF is going to act in response to a country's crisis. Unanticipated good IMF news should increase returns on the day of announcement, while bad news should result in lower returns. Whether returns continue to rise or fall subsequently depends on how market participants perceive such news and whether they consider the IMF stabilization program to be effective (Evrensel, 2002). IMF policies during the Asian financial crisis have been severely criticized by some observers, and the debate over the effectiveness of IMF policies has intensified since the crisis (see, for instance, Katz (1998) and Naim (2000)). Critics have argued that the Asian crisis, resulted from, or was intensified by, a “creditor panic” resulting from the IMF's statements that Asia needed drastic financial reforms. Declining investor confidence in the region was therefore an important factor in initiating and sustaining the crisis. For example, Sachs' (1999) has argued, “…provocative IMF actions have probably contributed to the [creditor] panics” (p. 389). A significant and sustained decline in stock market returns would be an evidence that unanticipated negative IMF actions, such as unfavorable statements regarding a country's economic situation or a delay of IMF loan announcements, have undermined investor confidence in markets if the latter follows the former. In the extreme, this may cause investors to rapidly and massively sell off their assets, creating a self-fulfilling panic. It is well known that volatility linkages among bond, money, and stock markets are strong (see Fleming et al. (1998) and the references cited therein), and therefore IMF actions might affect many different local financial markets. The empirical approach initially utilized to study the effects of news on stock markets is therefore also applied to foreign exchange and bond markets in order to separate general from idiosyncratic effects of IMF actions.2 This paper focuses on the response of stock, bond, and foreign exchange markets to a comprehensive set of IMF-related news to investigate whether market participants are able to extract information from IMF-related news and on the question of whether such news has any effect on market returns. The paper also investigates whether IMF-related news is associated with increasing volatility in financial markets because such volatility increases are a sign of panic among market participants. Our findings refute the panic hypothesis, suggesting that financial markets showed no excessive reaction to IMF announcements during the turbulent period of 1997–1999. The remainder of the paper is organized as follows. In the next section, we summarize previous work and discuss our contribution. Section 3 describes the construction of IMF events, and Section 4 reports our empirical results. The time pattern of returns surrounding IMF news is analyzed in Section 5. To assess the robustness of our findings for stock markets, Section 7 considers evidence from foreign exchange and bond markets. The last section summarizes the paper and discusses its policy implications.

We have analyzed the impact of IMF-related events on six emerging stock market returns during recent financial crises and IMF bailouts. In such difficult times, the IMF can be viewed as a lender of last resort, and investors trading in these markets form their actions based on their anticipation of the actions of the IMF in the near future. Our hypothesis was that investors' responses to IMF news are directly reflected in stock market returns. To test this hypothesis, we constructed a panel data set covering six emerging markets and found that good and bad news have statistically significant effects on stock market returns. This finding suggests that IMF actions have noticeable wealth effects for investors. On average, bad (good) IMF news decrease (increase) stock returns by one percentage point. These results are consistent with earlier studies that also report significant effects of IMF announcements on asset returns. Among the different categories of IMF actions, we find that stock markets react most significantly to delays of IMF loans or talks, suggesting that liquidity concerns, or solvency issues play a very significant role in emerging markets during financial crises. As a rule of thumb, delays of loans reduce stock market returns by about one percentage point. The robustness of these results is assessed using data for foreign exchange and bond markets. A number of results carry over, especially that bad news causes a depreciation of the exchange rate. We also look at the time pattern of market returns and find that there are differences between good and bad news and across financial markets. As a general conclusion, we cannot detect any longer-term impact of IMF news induced gains or losses. In our opinion, these findings contradict Sachs' (1999) view that a creditor panic took place after IMF announcements. We do find that returns fall as a result of negative IMF news, but the economic effect of IMF news is quite modest compared to the overall variation of returns in the data. For example, in our sample, stock returns fluctuate between −26.6 and +28.8 percent while the effect of IMF news is about 1 percent. Moreover, these effects do not last very long. Thus, we do not find support for the hypothesis of IMF-induced investor panics. Even stronger conclusions in this respect emerge from the analysis of foreign exchange and bonds markets. Further, we did not find strong evidence that IMF news increases market volatility. Hence, although IMF news causes wealth effects, they do not appear to contribute significantly to overall market uncertainty. These results suggest that markets had largely discounted the effects of IMF actions on volatility and functioned relatively smoothly even during this crisis period. Based on these results, we would argue that IMF actions and events primarily have an effect on returns, but not on risk.16