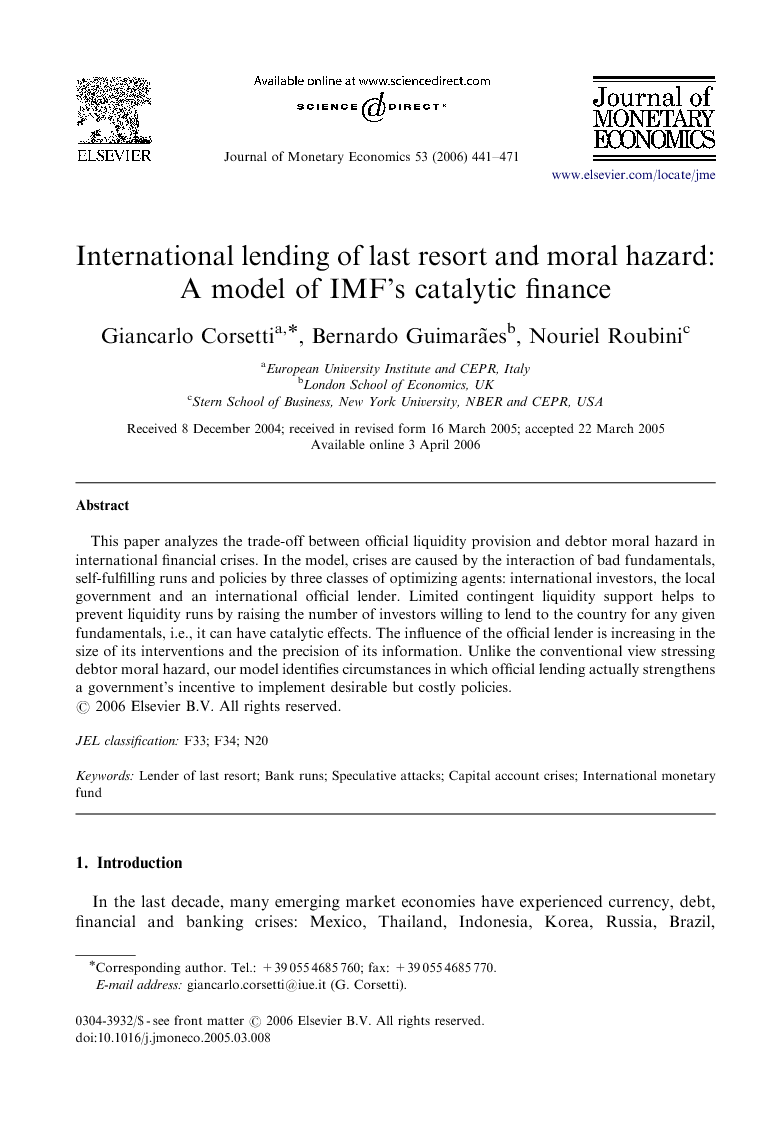 This paper analyzes the trade-off between official liquidity provision and debtor moral hazard in international financial crises. In the model, crises are caused by the interaction of bad fundamentals, self-fulfilling runs and policies by three classes of optimizing agents: international investors, the local government and an international official lender. Limited contingent liquidity support helps to prevent liquidity runs by raising the number of investors willing to lend to the country for any given fundamentals, i.e., it can have catalytic effects. The influence of the official lender is increasing in the size of its interventions and the precision of its information. Unlike the conventional view stressing debtor moral hazard, our model identifies circumstances in which official lending actually strengthens a government's incentive to implement desirable but costly policies.

In the last decade, the IMF systematically adopted a catalytic approach of large financial loans to support the main emerging market economies that experienced a crisis (see Cottarelli and Giannini, 2002). Arguably, ‘catalytic interventions’ succeeded in some cases (Mexico in 1995, Brazil in 1999 and again in 2002); they clearly failed in other cases (Russia in 1998, Argentina in 2001, Indonesia in 1998); there are a few examples that could be dubbed as ‘partial success,’ such as the IMF intervention in Korea during the 1997–1998 crisis. A number of contributions have attempted to perform systemic empirical studies of why and to what extent catalytic finance may work. While there is a clear need for further research, these studies point out formidable methodological difficulties in this area—whereas the actions by investors, governments and the IMF are all endogenous and interdependent. Because of these difficulties, the available empirical evidence is still not fully conclusive about catalytic finance even if some evidence is consistent with the implications of our model. Two arguments have been commonly presented against the provision of liquidity as a way to resolve crises. First, it has been argued that ‘limited’ liquidity support cannot work. Unless the IMF package can match a financing gap of any size—in most cases exceeding the amount of resources realistically available to an international institution operating as an ILOLR—self-fulfilling speculative runs leading to bad equilibria with default and high economic costs cannot be ruled out (see e.g. Zettelmeyer, 2000; Jeanne and Wyplosz, 2001). The second argument is that IMF liquidity support necessarily induces debtor moral hazard, i.e., expectations of a bailout always exacerbate welfare-reducing policy distortions. Based on these arguments, some have argued that ‘standstills’ (the international equivalent of bank holidays in a domestic bank run model) could be a superior approach to stem liquidity crises, and could possibly lessen moral hazard distortions due to bailout expectations. The model in this paper contributes to the debate providing reasons to refute the two arguments against international liquidity provision. First, it shows that ‘corner solutions’ in the form of exceptionally large and potentially unlimited liquidity provision are not necessary to reduce the incidence of liquidity runs. The presence of limited contingent liquidity support can be effective in inducing a fraction of private investors to decide to rollover their exposure to the country. Thus, partial support that does not fill ex ante the whole possible financing gap for a country can have an impact on individual portfolio decisions and therefore on the likelihood and the possible incidence of a crisis. Second, the model suggests that the standard argument that liquidity support always induces moral hazard distortions is similarly incorrect. In our results, the availability of contingent liquidity funds may tilt the incentives of a government towards implementing desirable but politically difficult policies and reforms—whereas the same government would have found them too costly and risky to implement if the outcome of its efforts were highly exposed to disruptive speculative runs. Thus, liquidity support may encourage good policy behavior—rather than discouraging it. Are ‘standstills’ superior to ‘catalytic finance’ as an international policy strategy to contain destructive liquidity runs? Standstill solutions to liquidity runs have been studied in closed economy models (see e.g. Goldstein and Pauzner, 2005), as well as in open economy models (see e.g. Gai et al., 2004; Shin, 2001; Martin and Penalver, 2003; Gai and Shin, 2004), but without providing a systematic comparison of costs and benefits of alternative solutions (i.e., standstills versus catalytic finance). An important direction for future research consists of addressing this issue within a rigorous analytical framework. Our model—we believe—provides a simple yet rich setup to undertake such a study.