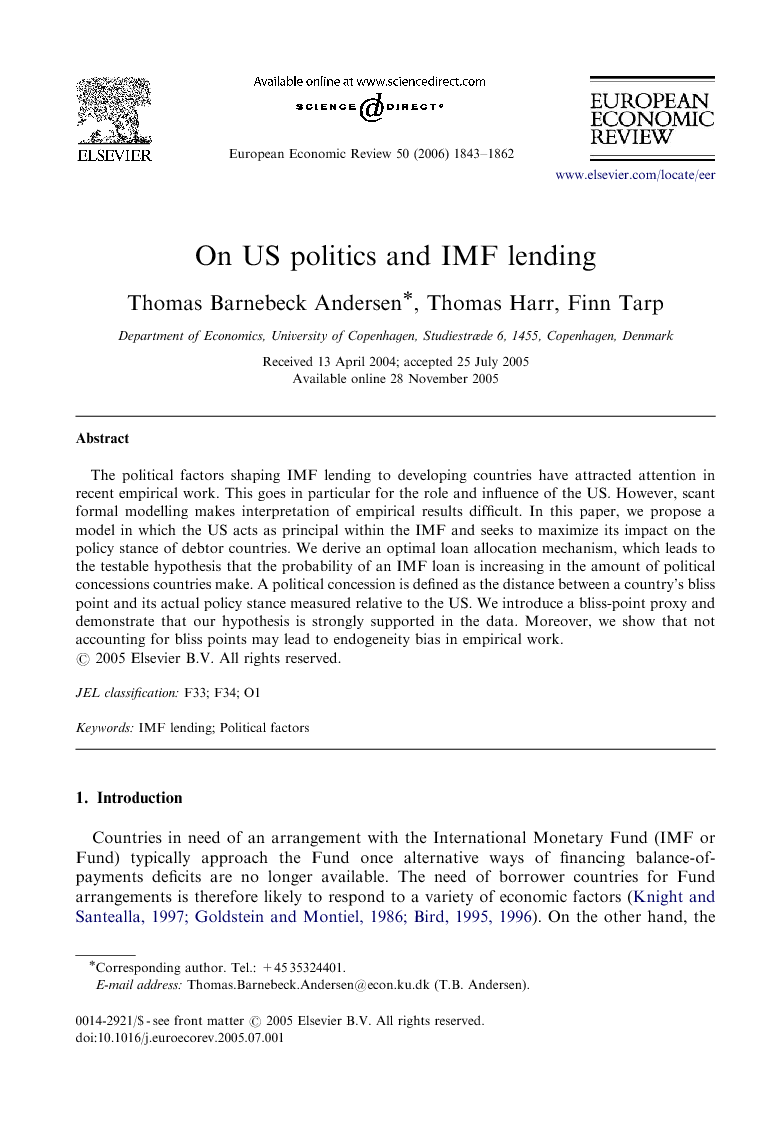 The political factors shaping IMF lending to developing countries have attracted attention in recent empirical work. This goes in particular for the role and influence of the US. However, scant formal modelling makes interpretation of empirical results difficult. In this paper, we propose a model in which the US acts as principal within the IMF and seeks to maximize its impact on the policy stance of debtor countries. We derive an optimal loan allocation mechanism, which leads to the testable hypothesis that the probability of an IMF loan is increasing in the amount of political concessions countries make. A political concession is defined as the distance between a country's bliss point and its actual policy stance measured relative to the US. We introduce a bliss-point proxy and demonstrate that our hypothesis is strongly supported in the data. Moreover, we show that not accounting for bliss points may lead to endogeneity bias in empirical work.

Countries in need of an arrangement with the International Monetary Fund (IMF or Fund) typically approach the Fund once alternative ways of financing balance-of-payments deficits are no longer available. The need of borrower countries for Fund arrangements is therefore likely to respond to a variety of economic factors (Knight and Santealla, 1997, Goldstein and Montiel, 1986, Bird, 1995 and Bird, 1996). On the other hand, the granting of IMF loans depends on Fund willingness to approve an arrangement on the basis of the economic stabilization program put forward. Hence, IMF lending is, as demonstrated by Knight and Santealla (1997), a joint outcome of economic demand and supply factors. Moving beyond the economic determinants of IMF lending, claims have over the years been made based on anecdotal evidence that political factors play a critical role in determining whether countries are successful in obtaining IMF loans or not; and the particular role and influence of the US on IMF behavior has attracted much attention. Calomiris (2000) provides two interesting recent examples:1 Ecuador has been suffering a deepening fiscal crisis for several years caused by the combination of an unresolved internal policy struggle, adverse economic shocks to its terms of trade, and a poorly regulated banking system […][…]. As yet, there is no consensus for reform in Ecuador, and there is no reason to believe that reforms will be produced by a few hundreds of millions of IMF dollars. Why in the world is the IMF sending money to Ecuador? Some observes claim that IMF aid to Ecuador is best understood as a means of sending political payola to the Ecuadorian government at a time when the United States wishes to ensure continuing use of its military bases there monitoring drug traffic. (p. 88). A knowledgeable insider informs me that the U.S. government has told Pakistan that its access to IMF subsidized lending depends on its willingness to sign a nuclear nonproliferation treaty. According to this person, unless Pakistan agrees, the U.S. will block its IMF program. (p. 99). Moreover, the Meltzer Commission (2000) implicitly accepts the view that G7 governments, particularly the US, use the IMF as a vehicle to achieve own political ends (see also Bird and Rowlands, 2001). This is feasible since voting power in the IMF Executive Board is based on the size of the quotas of member countries. The US holds around 17% of the votes, and this in effect gives the US veto power over all decisions requiring so-called special voting majority (85%). In addition, the US Executive Director is appointed by the American Government and is obliged by law to clear his or her decisions with the US Secretary of the Treasury (Oatley and Yackee, 2000). Econometric studies of the role of political factors in the decision making of the IMF have also started to emerge. Examples include Thacker (1999), Bird and Rowlands (2001) and Barro and Lee (2002). The common characteristic of these papers is that they specify empirical models based on a long list of potential explanatory variables, and they all conclude that political and institutional factors, including US influence, matter and add to our understanding of Fund lending.2 However, none of the papers provide any formal theoretical model of the rationale governing the allocation of IMF loans.3 Consider the seminal and widely quoted paper by Thacker (1999). He hypothesizes that IMF lending is influenced by political “proximity” between the potential borrower and the US on key political matters, as well as by political “movement” towards the US policy position on these matters.4 Proximity is found to be statistically significant, but only at the 10% level.5 In contrast, movement is significant at the 1% level. Thacker concludes that potential borrower countries are rewarded if they move closer to the US political position regardless of absolute alignment. Yet, the lack of a formal theoretical underpinning makes Thacker's results difficult to interpret: Why should the US reward a country taking a position close to the US stance if that particular country would have done so regardless of any reward? In the stylized model put forward in this paper, the empirical implications of the US maximizing its overall influence on the policy stance of IMF member countries are derived.6 The IMF loan allocation problem is posed as a mechanism design problem. We solve for an optimal mechanism in which the US allocates IMF loans through an all-pay auction-type mechanism, where loan allocation probabilities are increasing in the size of political concessions. Political concessions are defined as the difference between a country's actual policy position and its true political preferences, both measured relative to the US position.7 True political preferences are identified as bliss points in a policy space ranging from no to complete alignment with the US. Actual positions are measured in the same policy space. Our theoretical framework suggests that neglecting bliss points can lead to endogeneity problems. This is potentially important since all previous studies to our knowledge neglect bliss points. Relying on some measure of proximity on important issues, not the difference between proximity and bliss points, is problematic, since theoretically these two variables are correlated; any a priori consistent empirical test must either construct a proxy variable for the bliss points or rely on a fixed-effects approach to eliminate unobserved heterogeneity. Opting for the former approach, we introduce an empirical proxy for the bliss points and test our model using Thacker's baseline empirical specification. Our hypothesis finds strong support in both the Thacker data (1985–1994) and in an extended dataset covering 1995–2000. In sum, both our theoretical model and the empirical results indicate that bliss points should be taken into account. Moreover, by demonstrating that the data are consistent with maximizing behavior, our paper strengthens the thesis that political factors play a decisive role in IMF lending decisions. The rest of the paper is structured as follows: Section 2 provides the model and solves for the optimal mechanism. In Section 3, we derive empirical implications and test the model. Conclusions are offered in Section 4.

IMF lending to developing countries is controversial. Case studies and some econometric evidence are available, especially on the economic determinants of IMF behavior. Yet much remains to be learned about how economic and political factors shape IMF decision making. Also, since formal modelling of the political economy in which this international organization finds itself is scant, proper interpretation of results from empirical work is not straightforward. In this paper, we put forward a stylized model of US influence on IMF lending. Assuming that the US wishes to maximize its overall influence on the policy stance of debtor countries, we derived an optimal loan allocation mechanism and articulated a testable hypothesis. It states that the probability of receiving an IMF loan is increasing in political payments, defined as the difference between a given country's actual policy stand and its true political preferences (i.e. its bliss point) measured relative to the US. The model highlights that leaving bliss points unaccounted for (which to our knowledge is the case in previous work) may hide an endogeneity problem. We introduced a bliss-point proxy and tested our model using two panels. The data support the claim that the US influences how the Fund allocates its loans in a manner which is consistent with our model. In sum, in this paper we put focus on the need to take account of true political preferences of member countries in their relationship with the US. Moreover, by capturing such preferences explicitly through a bliss-point proxy, we believe to have strengthened the view that political factors, in this case US politics, play a decisive role in IMF decision making.