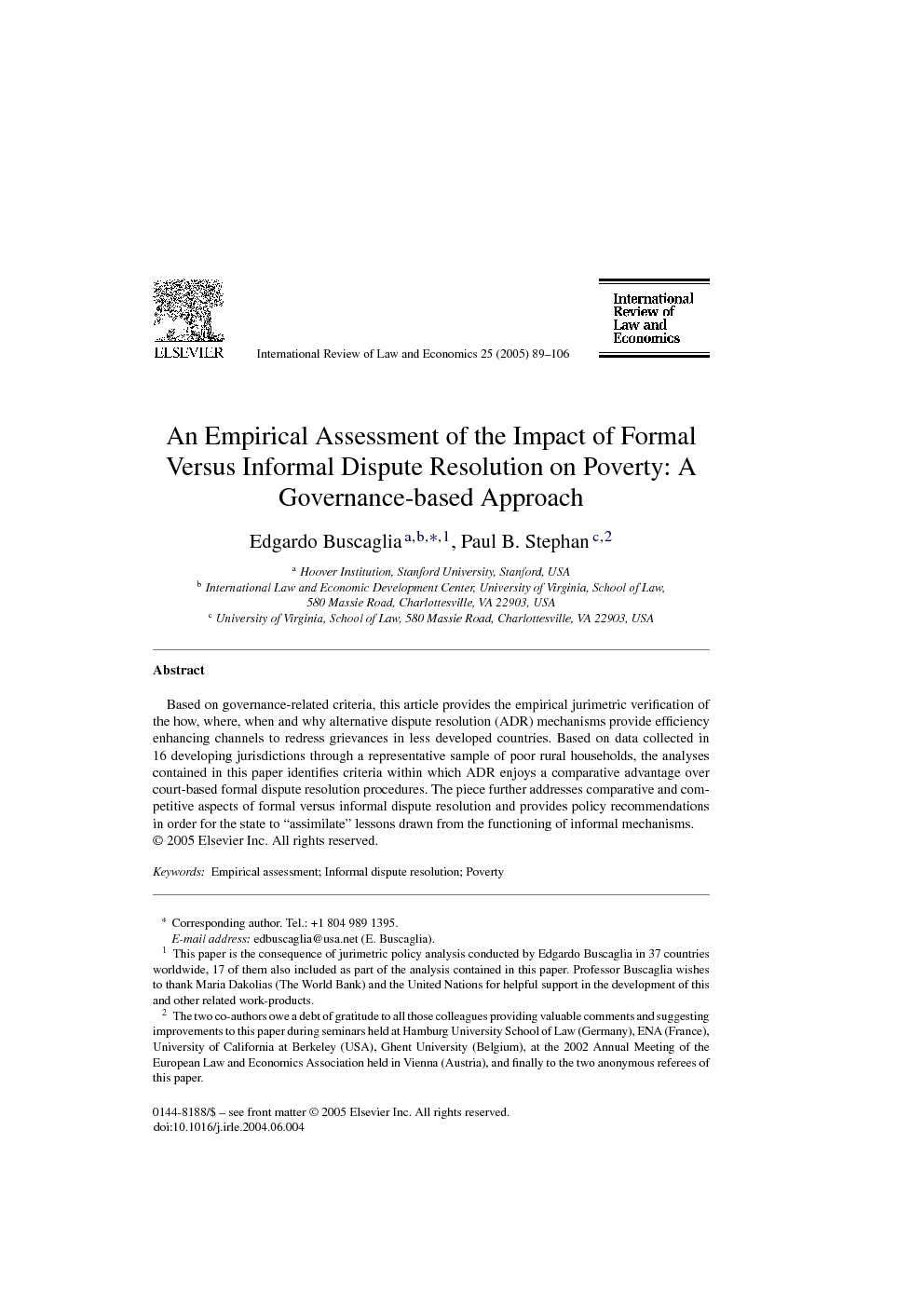 Based on governance-related criteria, this article provides the empirical jurimetric verification of the how, where, when and why alternative dispute resolution (ADR) mechanisms provide efficiency enhancing channels to redress grievances in less developed countries. Based on data collected in 16 developing jurisdictions through a representative sample of poor rural households, the analyses contained in this paper identifies criteria within which ADR enjoys a comparative advantage over court-based formal dispute resolution procedures. The piece further addresses comparative and competitive aspects of formal versus informal dispute resolution and provides policy recommendations in order for the state to “assimilate” lessons drawn from the functioning of informal mechanisms.

Democracy functions as a system in which formal and informal institutions serve the purpose of translating social preferences into public policies. Dispute resolution mechanisms are among these institutions. Enhancing the effectiveness of these mechanisms enables the judicial domain to better address social preferences through public policy.3 An essential part of the process of improving the ability of dispute resolution to perform this function involves ensuring that the institutions responsible for the interpretation and application of laws are able to serve those people who cannot find any other way to redress their grievances and solve their conflicts.4 To minimize cultural, socio-economic, geographic and political impediments to access to its services, the judiciary must adopt the most effective substantive and procedural mechanisms for reducing the transaction costs faced by those seeking to resolve their conflicts. If barriers to the judicial system affect the socially marginalized and poorest segments of the population, one can anticipate greater social and political conflict, social interaction becomes more difficult, and disputes become more costly.5 It has become clear that a centralized “top-down” approach to law making in developing countries has resulted in a rejection of the formal legal systems by marginalized elements of the population. These people perceive themselves as “divorced” from the formal framework of public institutions.6 The “divorce” reflects the gap between “law in the books” and “law in action” found in most developing countries. Because of this gap, large segments of the population who lack the information or resources to surmount significant substantive and procedural barriers pursue informal means to redress their grievances. In practice, informal institutions provide an escape valve for certain types of conflicts. Yet many other types of disputes, some involving fundamental rights and the public interest, go unresolved. This state of affairs undermines the legitimacy of the state, hampers economic interactions, and disproportionately burdens the poorest segments of the population.7 This paper uses jurimetric analysis to identify the links between access to dispute resolution mechanisms and its impact on the poorest segments of the population of three legal jurisdictions in Colombia.8 It then assesses the parallels between the economic barriers to access conflict resolution in Colombia with similar data collected in sixteen other countries. We proceed as follows. We first provide a conceptual framework addressing the interaction between formal and informal institutions dedicated to providing this service. We then review general aspects of the Latin American dispute resolution system to provide a context for our case study. We examine three cases that offer insights on the patterns of demand for formal and informal dispute resolution. These involve survey samples of the rural population in Colombia’s Andean region, where 70% of the nation’s population lives. We select two rural areas within the Department of Boyaca, Pauna and San Pablo de Borbur. These two jurisdictions have experienced relatively low levels of violence and guerilla activity compared to the rest of the Andean region. We compare these two regions to a third rural jurisdiction in Socha (Colombia), where less violence than other regions is experienced but where neither formal nor informal dispute resolution mechanisms function effectively. We then develop substantial evidence supporting our hypothesis that, in relation to the formal court system, informal dispute resolution mechanisms are a relatively preferred choice to resolve land disputes due to their governance-related advantages such as lower average costs of access and their more positive effect on household wealth amongst the poorest segments of the rural population.