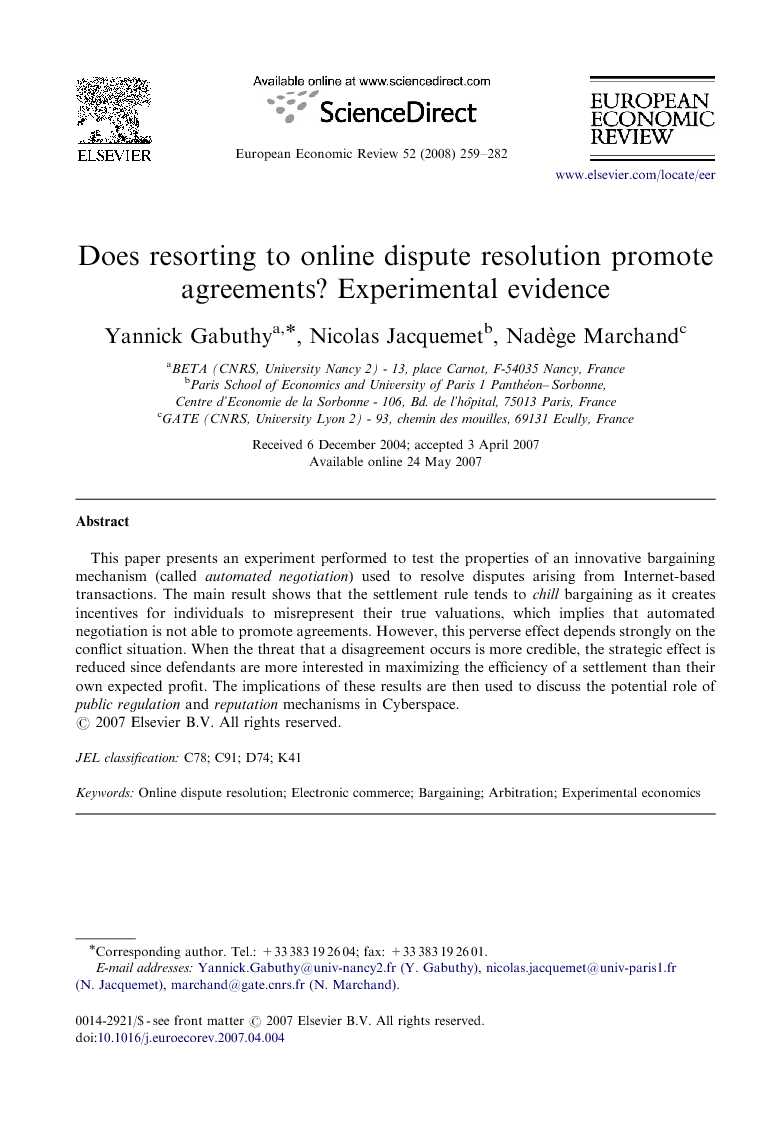 This paper presents an experiment performed to test the properties of an innovative bargaining mechanism (called automated negotiation) used to resolve disputes arising from Internet-based transactions. The main result shows that the settlement rule tends to chill bargaining as it creates incentives for individuals to misrepresent their true valuations, which implies that automated negotiation is not able to promote agreements. However, this perverse effect depends strongly on the conflict situation. When the threat that a disagreement occurs is more credible, the strategic effect is reduced since defendants are more interested in maximizing the efficiency of a settlement than their own expected profit. The implications of these results are then used to discuss the potential role of public regulation and reputation mechanisms in Cyberspace.

In this paper, we analyze the theoretical properties of the automated negotiation procedure and derive equilibrium strategies for the plaintiff and the defendant. The empirical properties of this innovative bargaining mechanism are also tested by performing a set of experiments. In particular, we consider the factors that appear to determine whether a subject places bids that are close to, or exaggerated from, his reservation value. Following the experimental results, we can state that the value of the compatibility factor and the extent of the conflict are such factors: the compatibility factor creates a chilling effect insofar as the settlement rule deliberately splits the difference between the disputants’ proposals and gives them incentives to adopt aggressive bargaining positions, while this effect is reduced when the extent of the conflict is higher. The intuition behind these results is consistent with a basic finding of studies on arbitration which shows that arbitration procedures, by lowering the overall cost of disagreement, increase the incidence of disagreement: bargaining with arbitration lessens the likelihood that bargainers will reach a settlement on their own (Currie and McConnell, 1991; Ashenfelter et al., 1992 and Dickinson, 2004). In other words, despite the significant evidence that arbitrators do not simply split the difference (Bloom, 1986 and Farber and Bazerman, 1986), there does appear to be empirical evidence of a chilling effect to arbitration.19 Another source of evidence is the narcotic effect of arbitration: going to arbitration engenders “dependence” on the procedure ( Currie, 1989; Bolton and Katok, 1998 and Bolton and Katok, 2004). More precisely, a dispute decreases the probability a dispute will happen in subsequent rounds; however, this learning effect with arbitration tends to be lower than it is without. Furthermore, our experimental results raise the crucial question of how to enforce agreements reached via automated negotiation and give some elements of thinking about the potential role of public regulation and reputation mechanisms in Cyberspace. Indeed, such automated negotiation systems are offered by private companies on the electronic justice market and are, by definition, contractual. Therefore, the problem is to know how a private electronic constraint can ensure that the disputants will enter in this type of procedure ex ante and will accept not to renegotiate the settlement ex post (given that nothing other than public justice can force an agent to settle a conflict and/or execute a settlement decision). In this context, we could argue that the reputation mechanisms existing on the Internet would be a powerful way to enforce such contracts. As mentioned in the Introduction, many of the online market sites (e.g. eBay, Amazon) offer reputation management systems that allow the trading parties to submit a rating of the counterpart's performance. Therefore, we could conjecture that if one of the disputants does not respect the settlement stated by the automated algorithm, then a naming and shaming strategy would occur and allow to enforce it. Furthermore, the question concerning the acceptance (or not) of the settlement by the parties arises obviously only if the latter managed to reach an agreement during the automated negotiation process. In other words, what happens if no agreement is reached at the end of the negotiation? This question is not trivial given the poor economic performance of the mechanism and we could think intuitively that the parties will recourse to an alternative dispute resolution system, such as arbitration or mediation (which are also available online). In summary, this paper may be considered as a first step in the empirical investigation of online dispute resolution. Indeed, following the above arguments, it is obvious that further experiments will have to be done before a clear picture of how the type of mechanisms studied here perform well. Such experiments would take into account, for example, the impact of reputation and the role of alternative dispute resolution mechanisms. In this context, we feel confident that the types of question raised by our experiment will be central to the final unraveling of the puzzles presented by the computer-aided bargaining systems available in the online environment.