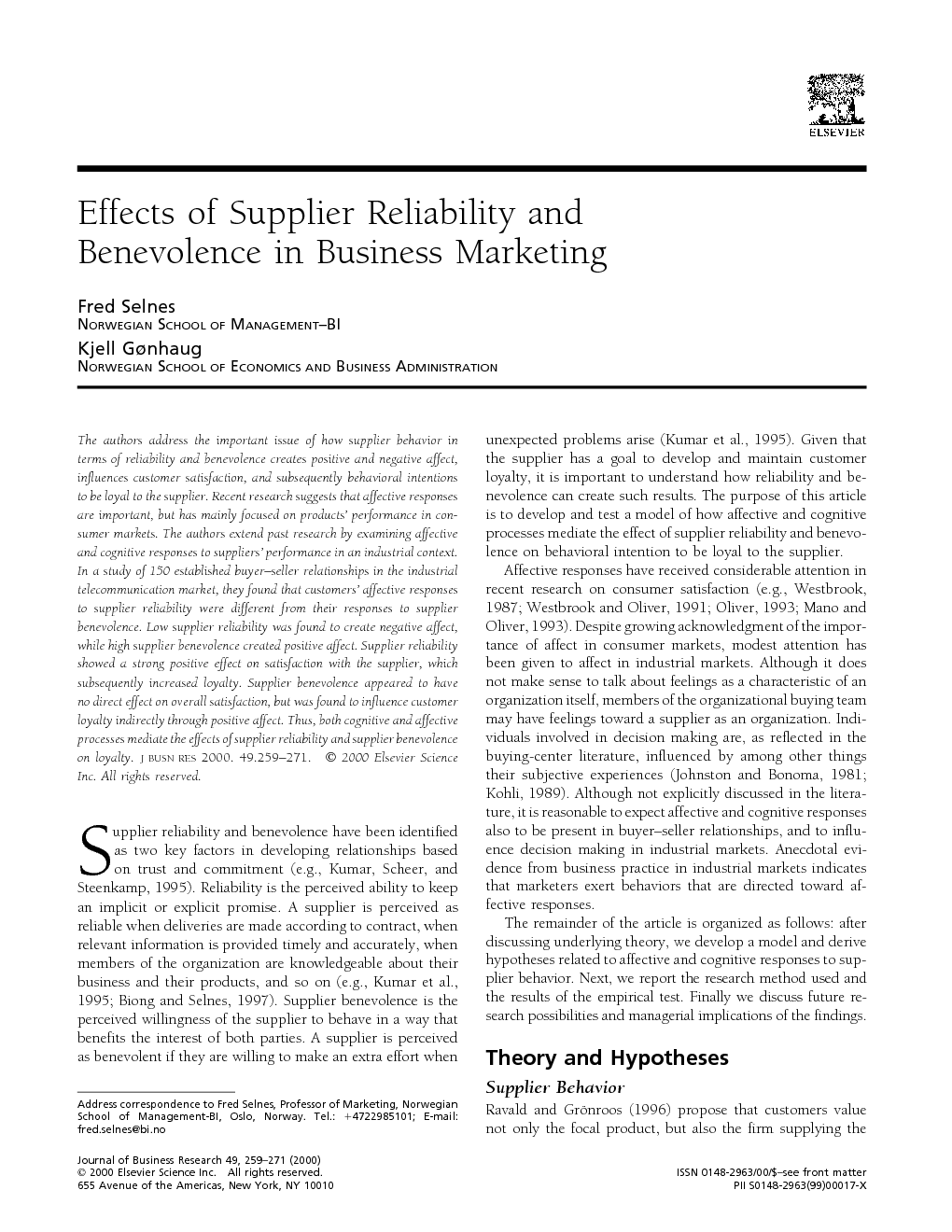 The authors address the important issue of how supplier behavior in terms of reliability and benevolence creates positive and negative affect, influences customer satisfaction, and subsequently behavioral intentions to be loyal to the supplier. Recent research suggests that affective responses are important, but has mainly focused on products' performance in consumer markets. The authors extend past research by examining affective and cognitive responses to suppliers' performance in an industrial context. In a study of 150 established buyer–seller relationships in the industrial telecommunication market, they found that customers' affective responses to supplier reliability were different from their responses to supplier benevolence. Low supplier reliability was found to create negative affect, while high supplier benevolence created positive affect. Supplier reliability showed a strong positive effect on satisfaction with the supplier, which subsequently increased loyalty. Supplier benevolence appeared to have no direct effect on overall satisfaction, but was found to influence customer loyalty indirectly through positive affect. Thus, both cognitive and affective processes mediate the effects of supplier reliability and supplier benevolence on loyalty. Supplier reliability and benevolence have been identified as two key factors in developing relationships based on trust and commitment (e.g., Kumar, Scheer, and Steenkamp, 1995). Reliability is the perceived ability to keep an implicit or explicit promise. A supplier is perceived as reliable when deliveries are made according to contract, when relevant information is provided timely and accurately, when members of the organization are knowledgeable about their business and their products, and so on (e.g., Kumar et al. 1995 and Biong and Selnes 1997). Supplier benevolence is the perceived willingness of the supplier to behave in a way that benefits the interest of both parties. A supplier is perceived as benevolent if they are willing to make an extra effort when unexpected problems arise (Kumar et al., 1995). Given that the supplier has a goal to develop and maintain customer loyalty, it is important to understand how reliability and benevolence can create such results. The purpose of this article is to develop and test a model of how affective and cognitive processes mediate the effect of supplier reliability and benevolence on behavioral intention to be loyal to the supplier. Affective responses have received considerable attention in recent research on consumer satisfaction (e.g., Westbrook 1987, Westbrook and Oliver 1991, Oliver 1993 and Mano and Oliver 1993). Despite growing acknowledgment of the importance of affect in consumer markets, modest attention has been given to affect in industrial markets. Although it does not make sense to talk about feelings as a characteristic of an organization itself, members of the organizational buying team may have feelings toward a supplier as an organization. Individuals involved in decision making are, as reflected in the buying-center literature, influenced by among other things their subjective experiences Johnston and Bonoma 1981 and Kohli 1989. Although not explicitly discussed in the literature, it is reasonable to expect affective and cognitive responses also to be present in buyer–seller relationships, and to influence decision making in industrial markets. Anecdotal evidence from business practice in industrial markets indicates that marketers exert behaviors that are directed toward affective responses. The remainder of the article is organized as follows: after discussing underlying theory, we develop a model and derive hypotheses related to affective and cognitive responses to supplier behavior. Next, we report the research method used and the results of the empirical test. Finally we discuss future research possibilities and managerial implications of the findings.