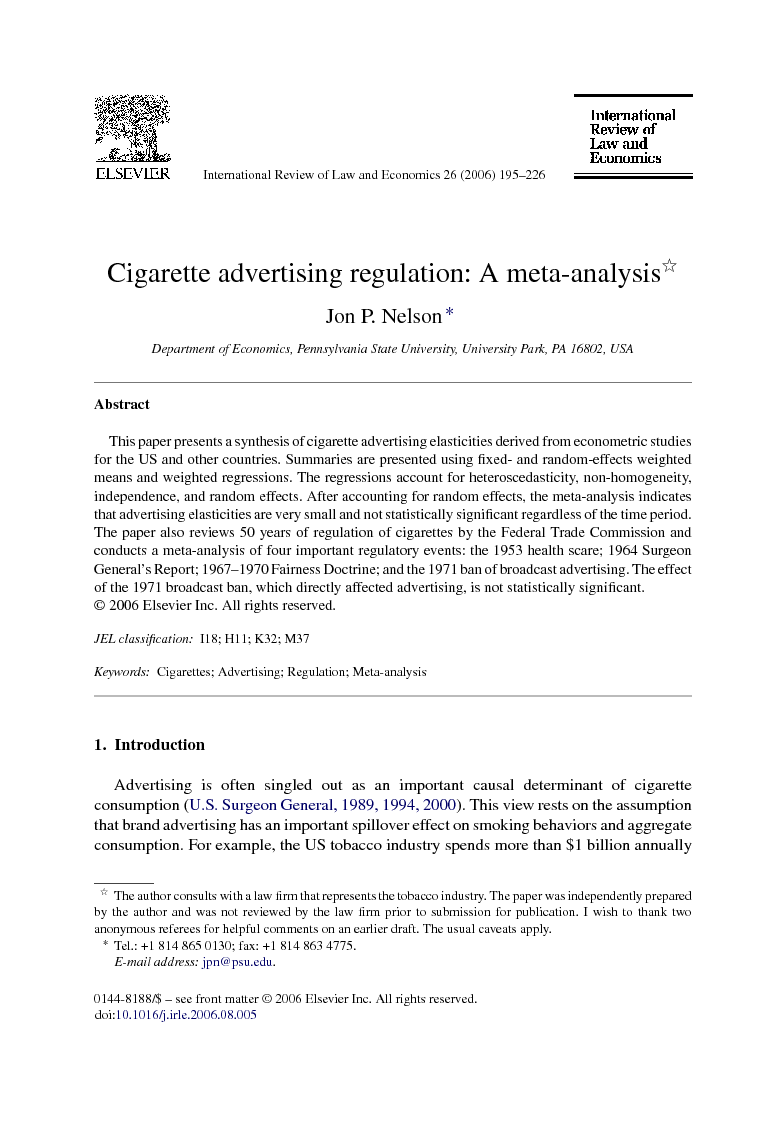 This paper presents a synthesis of cigarette advertising elasticities derived from econometric studies for the US and other countries. Summaries are presented using fixed- and random-effects weighted means and weighted regressions. The regressions account for heteroscedasticity, non-homogeneity, independence, and random effects. After accounting for random effects, the meta-analysis indicates that advertising elasticities are very small and not statistically significant regardless of the time period. The paper also reviews 50 years of regulation of cigarettes by the Federal Trade Commission and conducts a meta-analysis of four important regulatory events: the 1953 health scare; 1964 Surgeon General's Report; 1967–1970 Fairness Doctrine; and the 1971 ban of broadcast advertising. The effect of the 1971 broadcast ban, which directly affected advertising, is not statistically significant.

Advertising is often singled out as an important causal determinant of cigarette consumption (USSG, 1989, USSG, 1994 and USSG, 2000). This view rests on the assumption that brand advertising has an important spillover effect on smoking behaviors and aggregate consumption. For example, the US tobacco industry spends more than $1 billion annually on brand advertising and non-price promotions (FTC Report, 2004), and critics argue that this fact alone demonstrates that cigarette advertising must be important for smoking behaviors—otherwise the industry would not spend so much on advertising.1 This negative view of advertising is reflected in tobacco policies in the United States and other countries, including bans of broadcast and billboard advertising; restrictions on advertising messages and placements; public reporting requirements for advertising expenditures; requirements for package warning labels; and attempts to further limit promotions or packaging that might appeal to adolescents and young adults (Kessler et al., 1997 and State Attorneys General, 1998; USDOJ, 2005 and USFDA, 1996; WHO, 2003). Little systematic analysis exists, however, on the effectiveness of many of these policies. This paper provides cumulative evidence on the size and significance of the advertising elasticity of demand for cigarettes and associated federal regulations. For several reasons, estimation of demand elasticities for cigarettes is a frequent application of econometrics: for example, the policy issues are important; aggregate consumption and advertising data are readily available; and several important regulatory events have occurred, including the 1971 ban of broadcast advertising. As a result, numerous econometric studies estimate elasticities for cigarette advertising and other factors that might affect consumption, such as price and income effects, “health hazard” events, and package labeling laws. However, empirical estimates vary by time period, country, data interval, model specification, and econometric methods. As a consequence, considerable uncertainty exists regarding the significance and magnitude of the advertising elasticity. Reducing this uncertainty is important for public policy and provides information that might guide future research efforts. Similar uncertainly exists regarding the possible effects of regulation—a topic that previous literature summaries largely ignored. The objective of this paper is to use meta-analysis to synthesize available information on cigarette advertising elasticities and four associated regulatory events: the 1953 health scare; 1964 Surgeon General's Report; 1967–1970 Fairness Doctrine anti-smoking ads; and the 1971 broadcast ban. Advertising elasticities are obtained from 25 US studies and 13 non-US studies. Regulatory impacts for the US are obtained from 19 studies. These estimates are combined or synthesized using weighted means and generalized least-squares regression analysis. The technique of meta-analysis has been widely used to obtain formal combinations of research results from multiple studies (Farley & Lehmann, 1986; Stanley, 2001 and Stanley and Jarrell, 1989). A meta-analysis proceeds as follows (Lipsey & Wilson, 2001): first, the problem is stated such that it can be studied using a common quantitative “effect size” (e.g. scale-free advertising elasticities). Second, all available studies that provide comparable estimates are collected. Third, each study is evaluated and samples of estimated effect sizes and standard errors are obtained. Fourth, other relevant information is obtained on each study's sample and methods, such as time span, data interval, explanatory variables, and econometric methods. Potentially, this information can be used to explain the variation in the sample of elasticities. Fifth, the elasticities are synthesized or combined, and a single best “cumulative estimate” may be presented. This step is often controversial because the sample of observations may lack statistical independence or homogeneity. Hence, it is important to constrain the sample so as to produce relatively independent and homogeneous observations of a common phenomenon. The present study uses fixed- and random-effects methods to obtain weighted means and weighted regressions for separate samples for the US and non-US countries.

Most US studies of cigarette demand report small and insignificant advertising elasticities, which refutes the view that advertising has an important spillover effects on aggregate demand and smoking behaviors. Given the fragile nature of many econometric estimates, a meta-analysis of these results is revealing of the underlying population value(s). Meta-analysis is a research synthesis method that combines quantitative results in a rigorous fashion and which avoids the arbitrary judgments associated with traditional literature reviews. The application of meta-analysis in this paper employed several techniques that were ignored by two previous analyses, including random-effects weighted means, weighted regressions, and mixed-effects weighted regressions. The results of the analysis indicate that cigarette advertising elasticities for the US are extremely small and insignificantly different from zero. Prior to 1964, the preliminary results suggest that advertising had a small positive influence on cigarette consumption, but this result is not robust based on a general analysis that better accounts for the complexity of the data-generating process. Further, other explanations for small effects are possible, including the influence of demographics (baby boom generation), media effects (advent of TV advertising), and adoption of filtered cigarettes following the early health scares. While the sample is small, the meta-analysis results for the non-US countries also yield small elasticities, which are not significant using mixed-effects regressions.