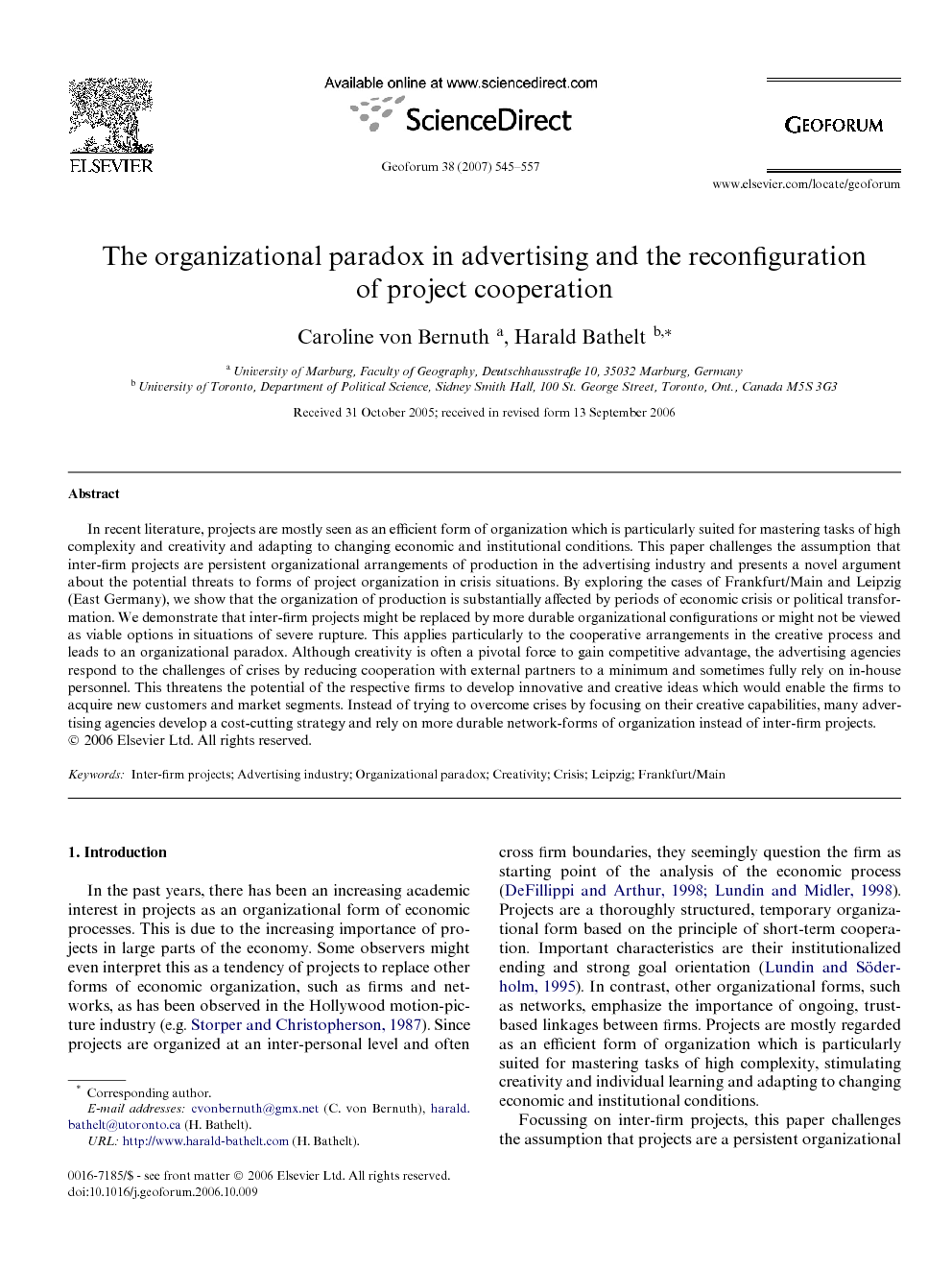 In recent literature, projects are mostly seen as an efficient form of organization which is particularly suited for mastering tasks of high complexity and creativity and adapting to changing economic and institutional conditions. This paper challenges the assumption that inter-firm projects are persistent organizational arrangements of production in the advertising industry and presents a novel argument about the potential threats to forms of project organization in crisis situations. By exploring the cases of Frankfurt/Main and Leipzig (East Germany), we show that the organization of production is substantially affected by periods of economic crisis or political transformation. We demonstrate that inter-firm projects might be replaced by more durable organizational configurations or might not be viewed as viable options in situations of severe rupture. This applies particularly to the cooperative arrangements in the creative process and leads to an organizational paradox. Although creativity is often a pivotal force to gain competitive advantage, the advertising agencies respond to the challenges of crises by reducing cooperation with external partners to a minimum and sometimes fully rely on in-house personnel. This threatens the potential of the respective firms to develop innovative and creative ideas which would enable the firms to acquire new customers and market segments. Instead of trying to overcome crises by focusing on their creative capabilities, many advertising agencies develop a cost-cutting strategy and rely on more durable network-forms of organization instead of inter-firm projects.

In the past years, there has been an increasing academic interest in projects as an organizational form of economic processes. This is due to the increasing importance of projects in large parts of the economy. Some observers might even interpret this as a tendency of projects to replace other forms of economic organization, such as firms and networks, as has been observed in the Hollywood motion-picture industry (e.g. Storper and Christopherson, 1987). Since projects are organized at an inter-personal level and often cross firm boundaries, they seemingly question the firm as starting point of the analysis of the economic process (DeFillippi and Arthur, 1998 and Lundin and Midler, 1998). Projects are a thoroughly structured, temporary organizational form based on the principle of short-term cooperation. Important characteristics are their institutionalized ending and strong goal orientation (Lundin and Söderholm, 1995). In contrast, other organizational forms, such as networks, emphasize the importance of ongoing, trust-based linkages between firms. Projects are mostly regarded as an efficient form of organization which is particularly suited for mastering tasks of high complexity, stimulating creativity and individual learning and adapting to changing economic and institutional conditions. Focussing on inter-firm projects, this paper challenges the assumption that projects are a persistent organizational configuration of production, drawing on the case of the advertising industry. The advertising industry was chosen because it is characterized by an almost ideal-type structure where inter-firm project organization is the rule rather than the exception. By exploring the cases of Frankfurt/Main and Leipzig, it will be shown that the organization of production is substantially affected by periods of economic crisis or political transformation (Bathelt and Jentsch, 2004). To a certain degree, we support the view that projects are a flexible organizational arrangement capable of adjusting themselves to many challenges in the market environment. In this respect, projects can be more efficient than other, more durable organizational arrangements. In this article, we intend to provide evidence that projects might be replaced by more permanent forms of economic organization in periods of economic or political crises, which is, in part, due to some limitations.

This paper develops an argument which has not yet received much attention in the literature on inter-firm projects as an organizational form of economic production. We have shown that projects are flexible organizational arrangements which can adjust to changes in external market conditions as team members can be chosen according to their specific talents and the characteristics of the task to be solved. At the same time, this phenomenon could be less pervasive as some observers of the recent discussion on project organization might expect. The previously discussed cases of the Frankfurt/Main and Leipzig advertising industries have shown that inter-firm projects might be replaced by other, more permanent forms of economic organization or they might not come into question as alternative organizational arrangements in cases of severe economic or political crisis. The paper emphasizes, however, that such shifts are by no means homogeneous over space and time. From a relational view, responses of individual agents and firms depend on the particular context in which they act and interact and the respective historical development path, part of which is related to regional specificities. This becomes clear in the two regional cases studied. In Frankfurt/Main, project organization is less flexible than expected, as relatively stable networks have developed over time. Projects are often a consequence of ongoing cooperation between the same agencies and project partners. Due to the present economic crisis in advertising expenditures, inter-firm cooperation has been minimized to employ in-house resources. Horizontal cooperation with external creatives, such as specialized freelancers, has especially suffered from this. Despite the changes in the political and economic context due to the Reunification, advertising projects with intensive inter-firm linkages have not yet developed in Leipzig. In contrast, the new structures in this industry restrain rather than support flexible cooperation in projects. This applies to both cooperation with suppliers and customers, as people in advertising agencies are hesitant to cooperate with external partners. This risk-adverse attitude towards inter-firm interaction is due to a number of reasons. Besides price competition and the reliance on non-creative market segments, it is sometimes related to negative personal experiences during the GDR regime or the Reunification period.