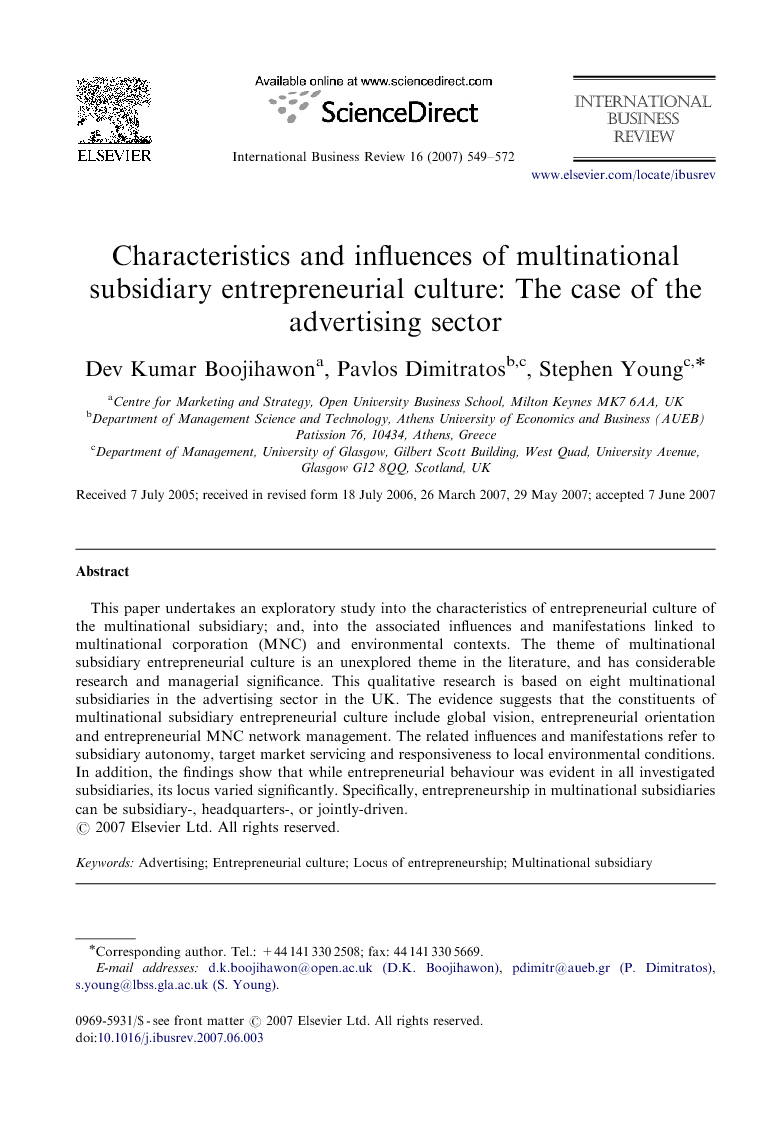 The aim of this paper is to enhance our understanding of entrepreneurship in the subsidiary of the multinational corporation (MNC) through a qualitative, exploratory research in the advertising and marketing communications (hereafter “advertising”) UK sector. Such a research has significant theoretical interest. Analytically, the study of entrepreneurship in the multinational subsidiary is at a relatively early stage of development. The literature on international entrepreneurship, on the one hand; and, that approaching the MNC as an enterprise comprising an interorganizational network of dispersed and differentiated relationships, on the other, have been offering useful insights for some time. Both these research streams can be very valuable to the investigated issue of entrepreneurship in multinational subsidiaries, which can be viewed as lying on the interface of the two areas. In the international entrepreneurship field, it is found that global vision of the entrepreneur and the entrepreneurial team in independently owned firms is key to enhanced performance of the firm in the international market (Autio, 2005; Madsen & Servais, 1997). These entrepreneurial firms often employ alliances in order to overcome resource constraints when they internationalize (Brush, 1995; Oviatt & McDougall, 1995). In the MNC field, it is recognized that subsidiaries may not be merely subordinate elements of their parent MNCs. Instead they can be examined as networks of autonomous and differentiated units (Bartlett & Ghoshal, 1989; Harzing, 1999; O’Donnell, 2000). Therefore, combining these ideas from the two areas, one can argue that multinational subsidiaries, when managed by individuals possessing a global vision and an ability to efficiently network with other MNC units, may achieve success through their entrepreneurial behaviour. Such an idea is to some extent examined primarily in the work of Birkinshaw and his colleagues (Birkinshaw (1997) and Birkinshaw (2000); Birkinshaw, Hood, & Jonsson, 1998; Birkinshaw, Hood, & Young, 2005), who note that subsidiaries can contribute to innovative and entrepreneurial activities in MNCs.