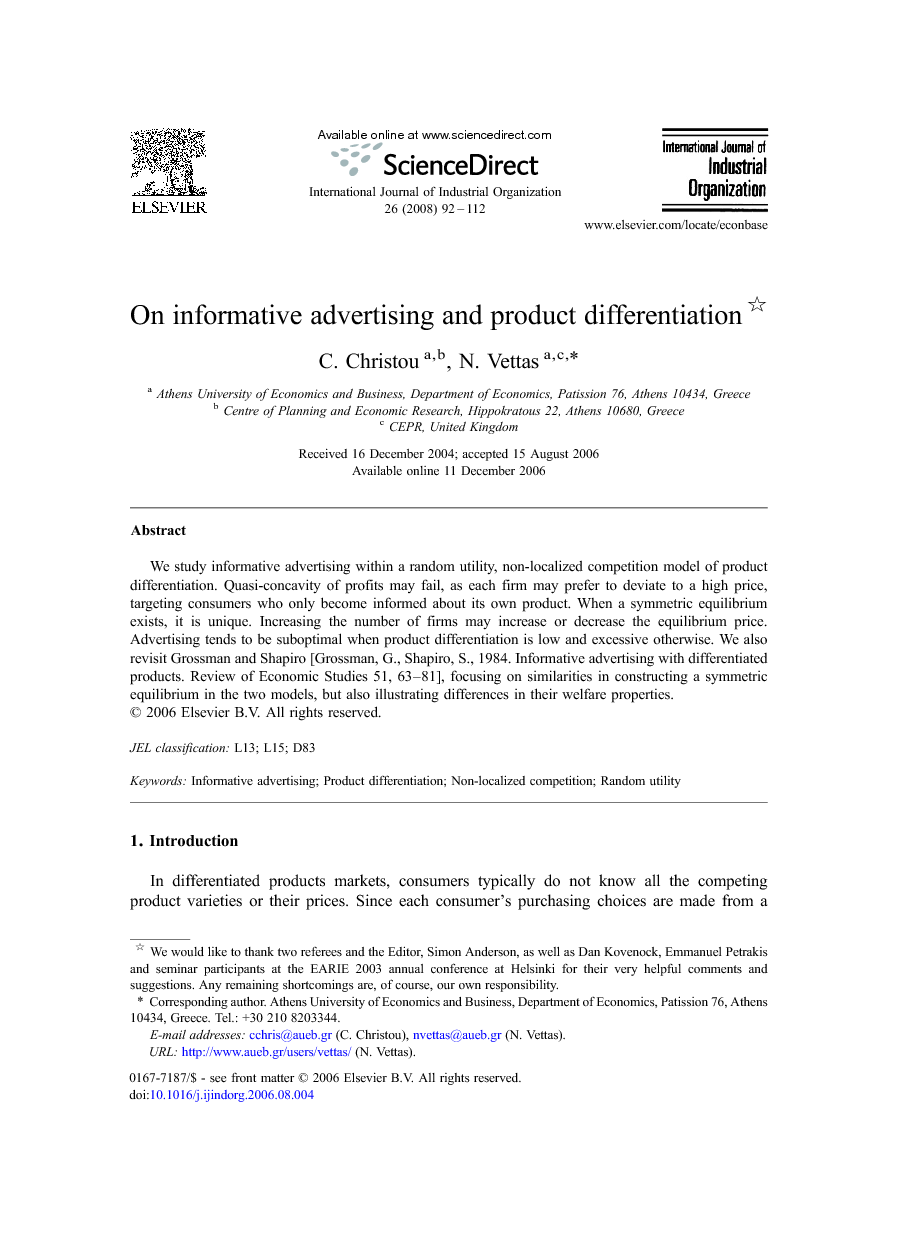 We study informative advertising within a random utility, non-localized competition model of product differentiation. Quasi-concavity of profits may fail, as each firm may prefer to deviate to a high price, targeting consumers who only become informed about its own product. When a symmetric equilibrium exists, it is unique. Increasing the number of firms may increase or decrease the equilibrium price. Advertising tends to be suboptimal when product differentiation is low and excessive otherwise. We also revisit Grossman and Shapiro [Grossman, G., Shapiro, S., 1984. Informative advertising with differentiated products. Review of Economic Studies 51, 63–81], focusing on similarities in constructing a symmetric equilibrium in the two models, but also illustrating differences in their welfare properties.

In differentiated products markets, consumers typically do not know all the competing product varieties or their prices. Since each consumer's purchasing choices are made from a restricted set, an important role exists for advertising, as firms may wish to inform consumers about their products and prices. In this paper we study informative advertising within a product differentiation oligopoly model with non-localized competition. We build on Perloff and Salop's (1985) “random utility” model, one that has also provided the basis for important analyses in the field.1 In this setting we introduce informative advertising, as first formalized by Butters (1977). Naturally, in such a model, firms' pricing and advertising decisions are jointly endogenous.2 The main features of our model are as follows. A number of firms compete with differentiated products and are able to inform the consumers via costly advertising about the existence of their products and their prices. Firms choose prices and advertising intensities simultaneously. Consumers choose to purchase a unit of the product that leaves them with the highest net surplus. We examine the existence of a symmetric equilibrium and explore its comparative statics and other properties. Specifically, our main focus is on symmetric equilibria where all consumers would purchase one unit when they receive an ad from at least one firm. Understanding how informative advertising interacts with a random utility non-localized model of product differentiation is important, as such a model represents one of the most straightforward ways to examine advertising in oligopoly. The analysis presents some technical challenges: while constructing the symmetric equilibrium, we find that the profit function may not be quasi-concave in each firm's own price over the entire range of relevant prices. Equilibrium existence is, thus, not guaranteed and the solution to the first-order conditions represents an equilibrium only for a certain range of the parameters, although local concavity holds. The economic intuition for the possible lack of quasi-concavity is important. Under standard assumptions about informative advertising, consumers that have not received an advertisement from a given firm cannot purchase its product. Thus, with positive probability, some consumers have only received advertisement from one and only one firm — this firm then enjoys monopoly power relative to these “captive” consumers and may have an incentive to raise its price to a high level. Of course, whether such a high price strategy is profitable or not depends (among other factors) on how many consumers become informed from advertising, which is endogenously determined. It follows that, when constructing a symmetric equilibrium, we have to examine possible deviations not only locally but also to much higher levels. While profit functions are not, in general, quasi-concave in price, a symmetric equilibrium does exist for a large space of parameters and we prove that, if it exists, it is unique. When we examine the comparative statics of the equilibrium, we find among other results that an increase in the number of firms does not necessarily reduce the equilibrium price. Still, increasing the number of firms decreases the per-firm profit, implying that, if entry were endogenized, there would be a unique zero profit equilibrium number of firms. We also explore the role of the advertising cost: an increase in this cost reduces the equilibrium advertising levels and increases prices; importantly, it may either decrease or increase the equilibrium profit. Informative advertising can be studied within a variety of underlying oligopoly models. One may wonder whether the “complication” described above about the shape of the profit functions in our setting is not also present in other models of informative advertising, in particular in the well-known Grossman and Shapiro (1984) model. We show that, in fact, it is present but, by focusing on local deviations around the symmetric equilibrium, previous studies have implicitly assumed that a deviation to a high price is not profitable. We illustrate this potential complication in the Grossman and Shapiro (1984) model.3 We characterize the profit functions over the entire range of relevant prices and discuss the second-order conditions. Since consumers do not know about a product if they have not received information, which firms may be the effective closest neighbors of each firm for each consumer becomes random. Due to the failure, in general, of quasi-concavity, results presented for the characterization of a symmetric equilibrium hold only for a restricted parameter space, while for other cases the intuition from these is not valid. We also observe that the underlying models — the Salop (1979) model on a circle and the Perloff and Salop (1985) random utility model with uniform value distributions— may lead to similar equilibrium behavior when a symmetric equilibrium with informative advertising exists.

The model examined in this paper represents one of the most straightforward ways to study informative advertising in oligopoly. Firms compete strategically both in prices and in informative advertising. In equilibrium, a higher level of advertising tends to lower prices, as consumers gain information about more products. Higher cost of advertising leads to higher prices but may either increase or decrease the firms' profits. More firms may lead to either a higher or a lower price. Compared to the social optimum the market tends to overprovide advertising when the degree of possible product differentiation is large, and to underprovide it otherwise. That a firm may have an incentive to deviate to a higher price than the one prescribed in the candidate symmetric equilibrium, rather than being an anomalous case, appears a robust characteristic of informative advertising models of product differentiation. The underlying force is that, for some parameter values, the (candidate) equilibrium advertising level is such that it makes it likely that a large enough share of consumers will be informed about only one product. As a result, a firm may wish to exploit its monopoly power over these captive consumers and increase its profit by charging a high price. It follows that, when establishing a symmetric price and advertising equilibrium, attention should be given to discrete jumps in prices and not only to local deviations. This feature is also present in models based on product differentiation with localized competition and we provide a further analysis of the Grossman and Shapiro (1984) model. Some additional aspects of advertising in oligopoly may fit in the general framework proposed here, even though they have to be left out of the present analysis. Such topics, for future work, may include cases when consumers are informed about the existence of products while advertising informs them only about prices, cases of vertical (quality) product differentiation, and cases where firms could choose their advertising content.