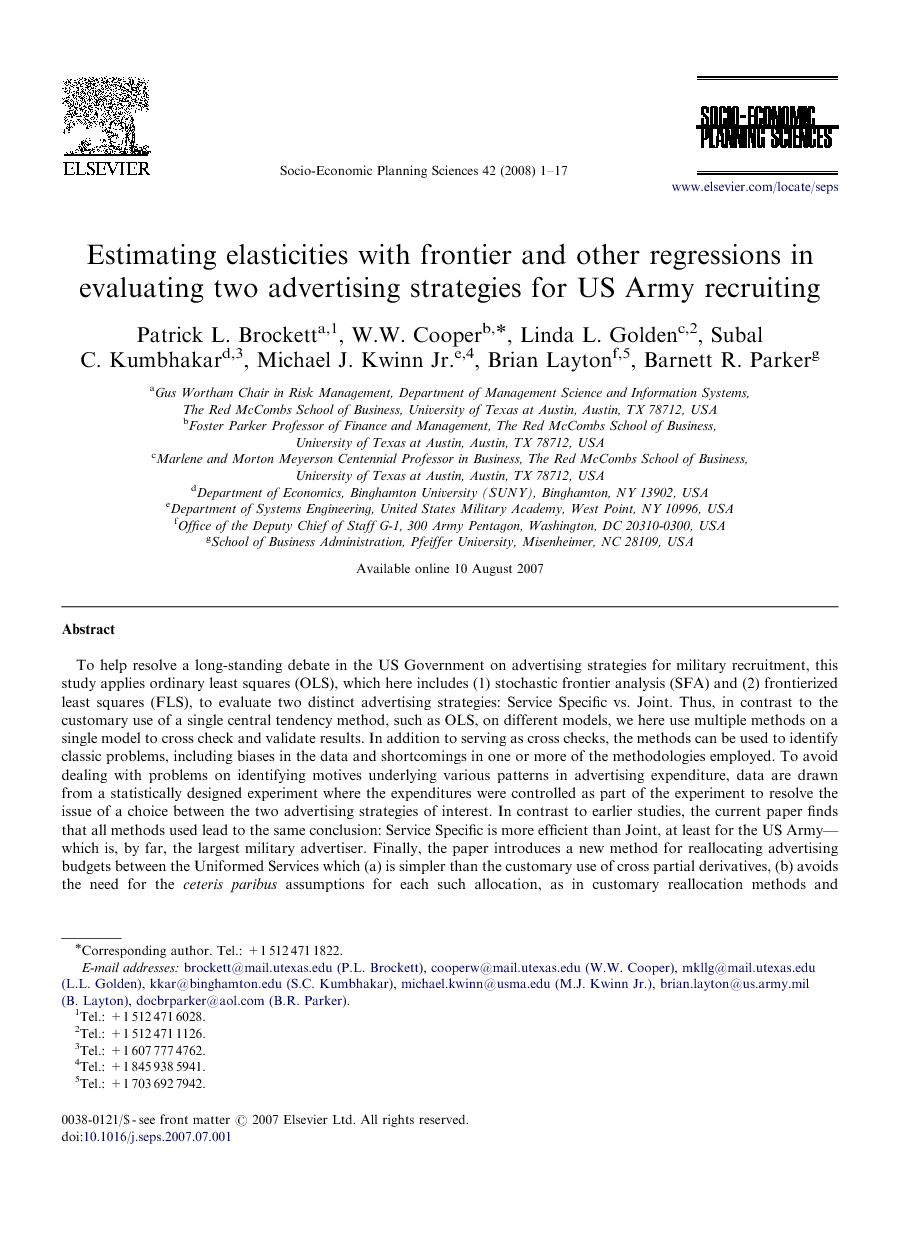 To help resolve a long-standing debate in the US Government on advertising strategies for military recruitment, this study applies ordinary least squares (OLS), which here includes (1) stochastic frontier analysis (SFA) and (2) frontierized least squares (FLS), to evaluate two distinct advertising strategies: Service Specific vs. Joint. Thus, in contrast to the customary use of a single central tendency method, such as OLS, on different models, we here use multiple methods on a single model to cross check and validate results. In addition to serving as cross checks, the methods can be used to identify classic problems, including biases in the data and shortcomings in one or more of the methodologies employed. To avoid dealing with problems on identifying motives underlying various patterns in advertising expenditure, data are drawn from a statistically designed experiment where the expenditures were controlled as part of the experiment to resolve the issue of a choice between the two advertising strategies of interest. In contrast to earlier studies, the current paper finds that all methods used lead to the same conclusion: Service Specific is more efficient than Joint, at least for the US Army—which is, by far, the largest military advertiser. Finally, the paper introduces a new method for reallocating advertising budgets between the Uniformed Services which (a) is simpler than the customary use of cross partial derivatives, (b) avoids the need for the ceteris paribus assumptions for each such allocation, as in customary reallocation methods and (c) simplifies matters so that, for instance, it is not necessary to introduce an entirely new organization to administer the desired coordinating activities.

Military recruitment, with advertising as an important component of the effort, is of great importance, especially for the US Army in the current US social and political setting. A long-standing issue involves the balance between “Joint” advertising, which is directed to making a military career attractive, and “Service-Specific” advertising, which is directed to securing enlistments for each service—Army, Navy, Air Force, and Marines. This topic, we might note, is analogous to the issue of “category” vs. “brand” advertising in commercial practice—e.g., “drink orange juice” vs. “drink a particular brand.” Hence, the approaches used in the current study have more general applicability, and include commercial as well as military recruitment advertising. (See the penultimate section of the paper for an illustrative application with a new method for coordinating such activities.) The problem of choice between Joint vs. Service-Specific strategies was again brought to the fore in a presentation to the Department of Defense (DoD) by the advertising firm of Bozell-Eskew [1]. It recommended “an exponential increase in the Joint advertising budget”—in which advertising would be directed to promoting a favorable feeling toward the military lifestyle. This recommendation was partly due to a similarly oriented (earlier) recommendation by the US Congressional Budget Office (CBO). However, neither Bozell-Eskew nor CBO offered any empirical evidence in support of their respective recommendations.

In this paper, we employed several methodologies, including two stochastic frontier regressions, DEA, and, finally, a central tendency OLS regression to analyze the effects of various inputs on military recruiting, with emphasis on Joint vs. Service-Specific advertising as it applies to Army recruiting. In all cases—i.e., for all four methodologies—Service Specific was favored over Joint. This does not necessarily mean that Joint should be abandoned; but, it does bring into question blanket recommendations that point to “exponential” increases in Joint at the expense of Service Specific, such as those recommended by WCAR and Bozell–Eskew (as well as CBO). A case might be made for the “long-term” advantages of Joint, but this would require data beyond what the Ad-Mix study supplies. See Sackett and Mavor [3] for a general description of data needs, including thoughts on long-range studies in military recruitment. In an effort to meet more immediate needs, we developed structures for identifying optimal budgetary allocations. Our analyses have, we feel, offered new insights into long-standing controversies involving advertising/recruitment for the military services. Admittedly, the data we used were collected prior to the “internet” generation. It is difficult to believe, however, that this would have significant impact on the findings. Indeed, as Sackett and Mavor [3] report, there has been a long term (pre-internet) trend away from military services likely connected with college attendance and expanding employment opportunities for the relevant age groups in a growing economy. In this regard, note the positive and statistically significant values for unemployment elasticities in all three regressions in Table 4. Hopefully, evidence could be accumulated to take account of longer-term effects of Joint and Service-Specific advertising, as well as the use of carryover effects of advertising such as those we discussed involving one period to another and described in (1) for the RAND study [10]. See Cooper et al. [32] for ways to overcome data deficiencies in meeting and replacing the copious data requirements of time series analyses. As shown in [32], this can be accomplished with data for only a single period by using DEA to obtain “long-run” results that utilize concepts from “comparative statics,” as distinct from “dynamics” in economic theory. That is, we emphasize the long-run effects rather than the way the long run is reached, period-by-period, as in a time series analysis.