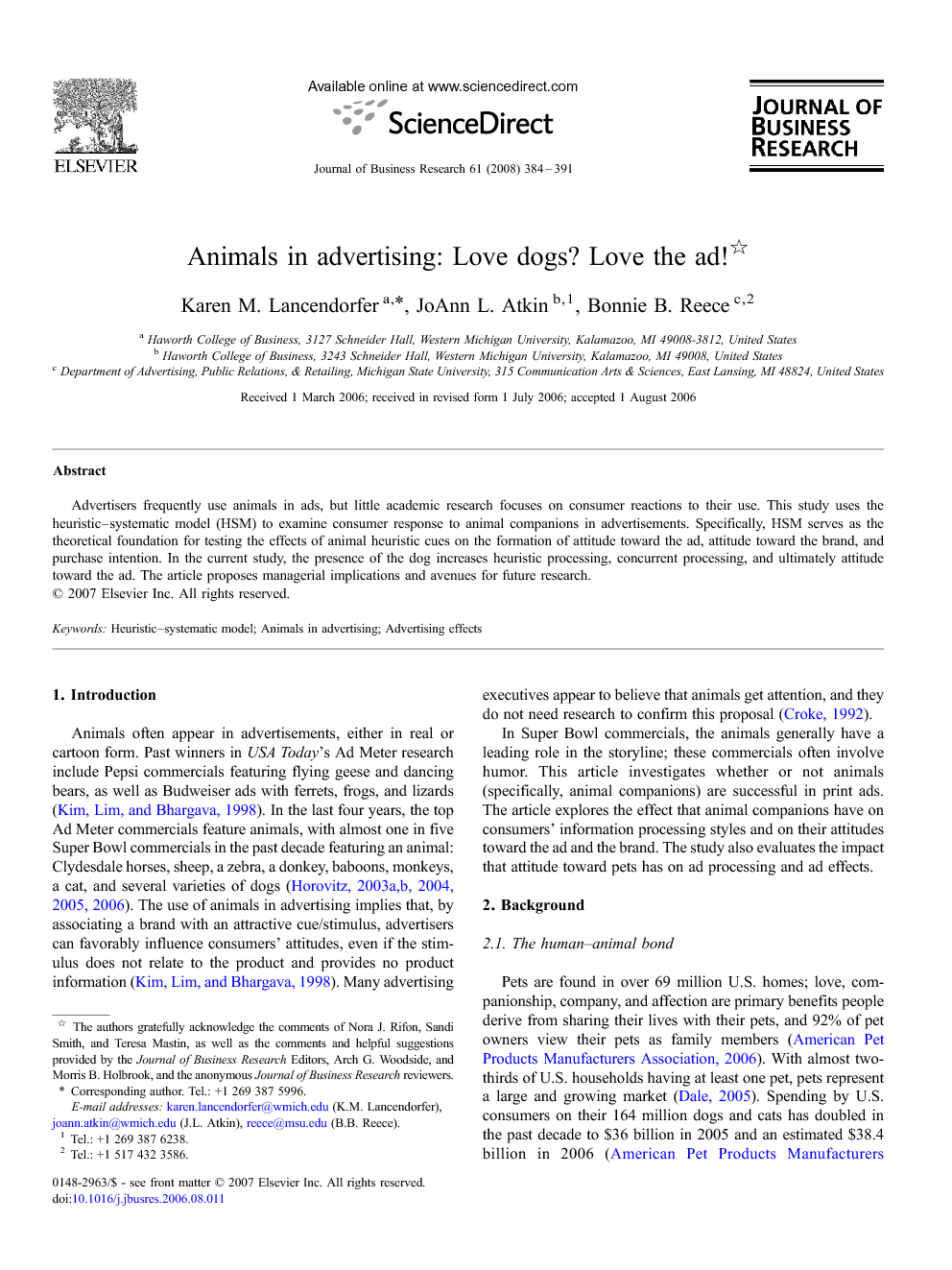 Advertisers frequently use animals in ads, but little academic research focuses on consumer reactions to their use. This study uses the heuristic–systematic model (HSM) to examine consumer response to animal companions in advertisements. Specifically, HSM serves as the theoretical foundation for testing the effects of animal heuristic cues on the formation of attitude toward the ad, attitude toward the brand, and purchase intention. In the current study, the presence of the dog increases heuristic processing, concurrent processing, and ultimately attitude toward the ad. The article proposes managerial implications and avenues for future research.

Animals often appear in advertisements, either in real or cartoon form. Past winners in USA Today's Ad Meter research include Pepsi commercials featuring flying geese and dancing bears, as well as Budweiser ads with ferrets, frogs, and lizards (Kim, Lim, and Bhargava, 1998). In the last four years, the top Ad Meter commercials feature animals, with almost one in five Super Bowl commercials in the past decade featuring an animal: Clydesdale horses, sheep, a zebra, a donkey, baboons, monkeys, a cat, and several varieties of dogs ( Horovitz, 2003a, Horovitz, 2003b, Horovitz, 2004, Horovitz, 2005 and Horovitz, 2006). The use of animals in advertising implies that, by associating a brand with an attractive cue/stimulus, advertisers can favorably influence consumers' attitudes, even if the stimulus does not relate to the product and provides no product information (Kim, Lim, and Bhargava, 1998). Many advertising executives appear to believe that animals get attention, and they do not need research to confirm this proposal (Croke, 1992). In Super Bowl commercials, the animals generally have a leading role in the storyline; these commercials often involve humor. This article investigates whether or not animals (specifically, animal companions) are successful in print ads. The article explores the effect that animal companions have on consumers' information processing styles and on their attitudes toward the ad and the brand. The study also evaluates the impact that attitude toward pets has on ad processing and ad effects.

Using animals is a common practice for advertising campaigns today, despite the “hassles” and costs associated with working with animals. The accepted belief is that animals in advertisements inspire good feelings about the advertisement and the brand. The current research supports the anecdotal evidence that the use of animals in advertising has positive effects, especially when combined with a favorable attitude toward pets, but it also suggests that non-animal ad executions can be equally effective.