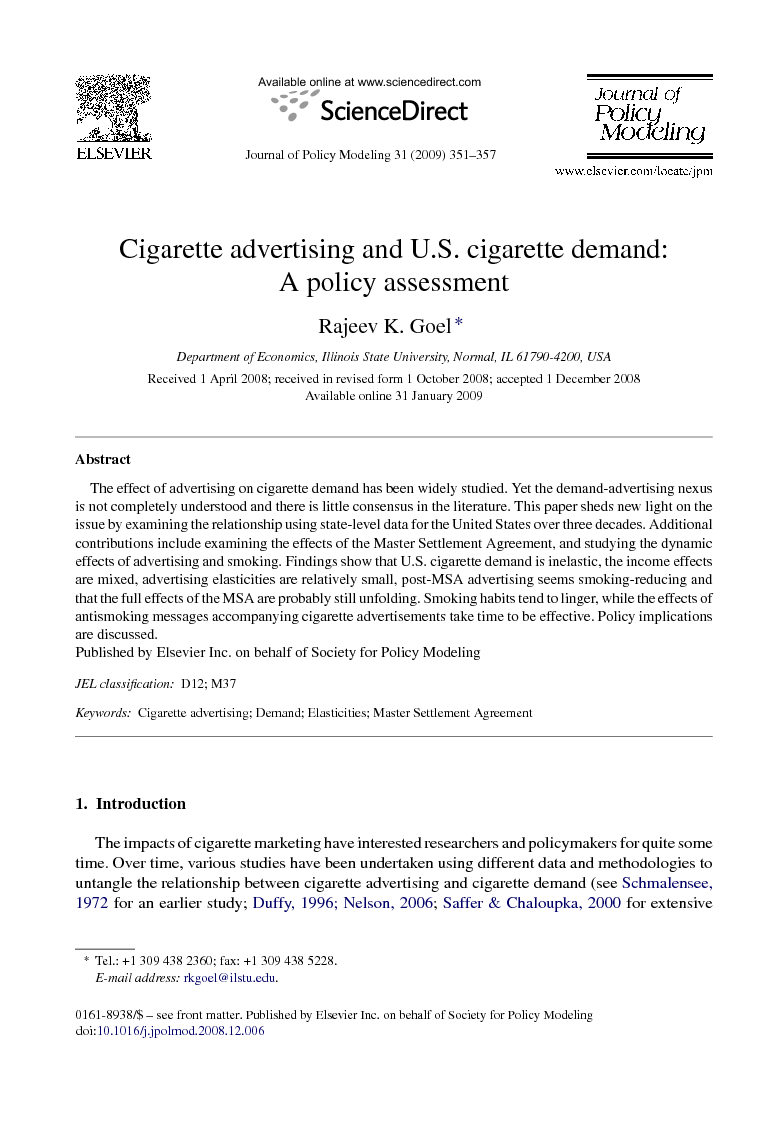 The effect of advertising on cigarette demand has been widely studied. Yet the demand-advertising nexus is not completely understood and there is little consensus in the literature. This paper sheds new light on the issue by examining the relationship using state-level data for the United States over three decades. Additional contributions include examining the effects of the Master Settlement Agreement, and studying the dynamic effects of advertising and smoking. Findings show that U.S. cigarette demand is inelastic, the income effects are mixed, advertising elasticities are relatively small, post-MSA advertising seems smoking-reducing and that the full effects of the MSA are probably still unfolding. Smoking habits tend to linger, while the effects of antismoking messages accompanying cigarette advertisements take time to be effective. Policy implications are discussed.

The impacts of cigarette marketing have interested researchers and policymakers for quite some time. Over time, various studies have been undertaken using different data and methodologies to untangle the relationship between cigarette advertising and cigarette demand (see Schmalensee, 1972 for an earlier study; Duffy, 1996 and Nelson, 2006; Saffer & Chaloupka, 2000 for extensive surveys of the literature). Yet, the relationship between advertising and cigarette demand is not crystal clear. For instance, some studies have found a small positive impact of advertising on smoking, others have found the relation to be statistically insignificant, and some have even found the relation to be negative (Nelson, 2006; Saffer & Chaloupka, 2000). One reason for the ambiguity might be that cigarette advertising comes in various forms including print, broadcast, billboard, package, in-store, entertainment and Internet, etc. These forms can potentially have different qualitative impacts on demand. Further, some types of advertising might have a longer shelf life and thus might tend to linger over multiple periods. Therefore, the overall effects of advertising can be hard to ascertain. Over time, policymakers at various levels of government have devised numerous policies to control and counter the effects of cigarette advertising. These initiatives have spawned a whole range including media advertising bans, restrictions on the content and location of advertisements, and anti-advertisement inclusions (health warnings) in advertisements, etc. Changing technologies, on the other hand, have enabled cigarette marketers to stay a step ahead of regulation. A glaring example of this is Internet advertising that is global in nature and beyond the restrictive control of individual governments. In light of this, policymakers remain interested in getting a better handle on the effects of advertising and this paper sheds some new light on this aspect.

The effect of advertising on cigarette demand has been widely studied. Yet the demand-advertising nexus is not completely understood and there seems to be little consensus in the literature. This paper attempts to shed some new light on the issue by examining the relationship using state-level data for the United States over three decades. Additional contributions of this research include examining the effects of the Master Settlement Agreement, and studying the dynamic effects, both with respect to advertising and cigarette consumption. A number of previous studies of cigarette advertising have examined earlier time periods that straddled the 1971 U.S. broadcast ban on cigarette advertising to study the effects of this regulation (Baltagi & Levin, 1986). The present study uses more recent data and a period after the dust had settled from the broadcast ban. Findings show that U.S. cigarette demand is inelastic, the income effects are mixed, the advertising elasticities are relatively small, post-MSA advertising reduces smoking and that the full effects of the MSA are probably still unfolding. The price elasticity estimates, when habit effects are considered, are lower than many found in the literature with different data and/or different control variables, although some recent studies have found the demand to be somewhat elastic (see Gallet & List, 2003; Goel & Nelson, 2006). In terms of magnitudes, the price elasticities (in absolute value) are greater than the advertising elasticities. In turn, advertising elasticities are greater than the income elasticities. Smoking habits tend to linger, while the effects of antismoking messages accompanying cigarette advertisements take some time to take effect. A number of policy implications emerge from this research. First, the relatively low price elasticity implies greater tax revenue generation opportunities on the one hand, but fewer cessation-inducing opportunities exist on the other hand. Second, the relatively small, and often insignificant, advertising elasticities suggest that policymakers should pay less attention to controlling cigarette advertising, and perhaps could focus their efforts on other smoking-control initiatives. Third, a percentage increase in cigarette prices is shown to reduce cigarette consumption by more than a similar percent decrease in advertising spending. Fourth, the anti-smoking messages accompanying advertisements seem to take time to be effective. Fifth, the strong habit effects of smoking reinforce the prudence of targeting smoking-control efforts at the youth. Sixth, the qualitative changes introduced in terms of limitations on the placement and content of cigarette advertising after the Master Settlement Agreement seem to be reducing smoking. Finally, the overall effects of the Master Settlement Agreement are probably still unfolding, even after half a dozen years following the Agreement. Future research could extend this line of investigation by examining cigarette demand with data at a finer level of detail. For instance, what are the effects of different types of advertising (e.g., print advertising versus Internet advertising) on cigarette demand? It is towards this end that our efforts will be focused next.