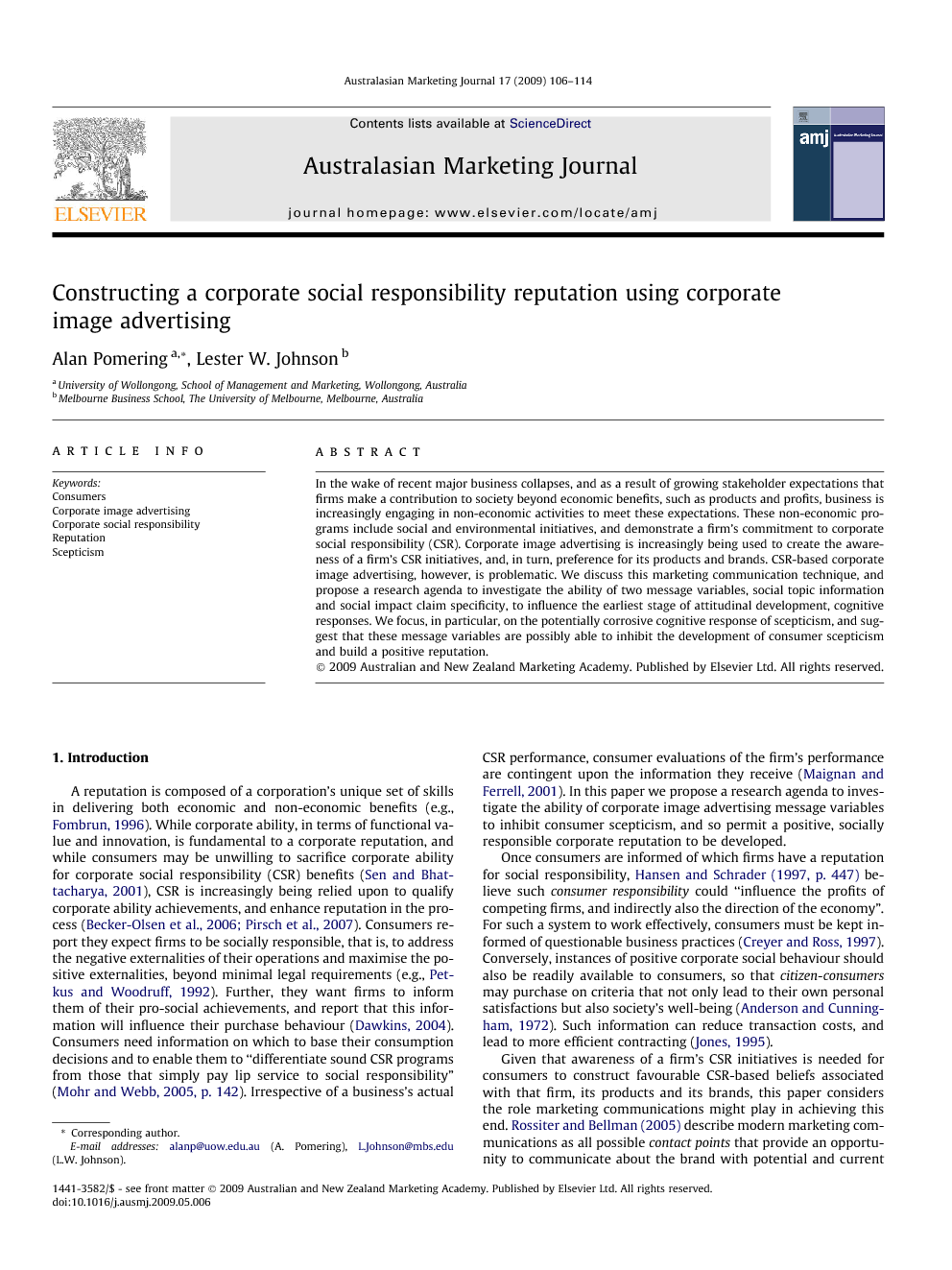 In the wake of recent major business collapses, and as a result of growing stakeholder expectations that firms make a contribution to society beyond economic benefits, such as products and profits, business is increasingly engaging in non-economic activities to meet these expectations. These non-economic programs include social and environmental initiatives, and demonstrate a firm’s commitment to corporate social responsibility (CSR). Corporate image advertising is increasingly being used to create the awareness of a firm’s CSR initiatives, and, in turn, preference for its products and brands. CSR-based corporate image advertising, however, is problematic. We discuss this marketing communication technique, and propose a research agenda to investigate the ability of two message variables, social topic information and social impact claim specificity, to influence the earliest stage of attitudinal development, cognitive responses. We focus, in particular, on the potentially corrosive cognitive response of scepticism, and suggest that these message variables are possibly able to inhibit the development of consumer scepticism and build a positive reputation.

A reputation is composed of a corporation’s unique set of skills in delivering both economic and non-economic benefits (e.g., Fombrun, 1996). While corporate ability, in terms of functional value and innovation, is fundamental to a corporate reputation, and while consumers may be unwilling to sacrifice corporate ability for corporate social responsibility (CSR) benefits (Sen and Bhattacharya, 2001), CSR is increasingly being relied upon to qualify corporate ability achievements, and enhance reputation in the process (Becker-Olsen et al., 2006 and Pirsch et al., 2007). Consumers report they expect firms to be socially responsible, that is, to address the negative externalities of their operations and maximise the positive externalities, beyond minimal legal requirements (e.g., Petkus and Woodruff, 1992). Further, they want firms to inform them of their pro-social achievements, and report that this information will influence their purchase behaviour (Dawkins, 2004). Consumers need information on which to base their consumption decisions and to enable them to “differentiate sound CSR programs from those that simply pay lip service to social responsibility” (Mohr and Webb, 2005, p. 142). Irrespective of a business’s actual CSR performance, consumer evaluations of the firm’s performance are contingent upon the information they receive (Maignan and Ferrell, 2001). In this paper we propose a research agenda to investigate the ability of corporate image advertising message variables to inhibit consumer scepticism, and so permit a positive, socially responsible corporate reputation to be developed.

If a firm seeks to build its reputation on CSR, it must institutionalise CSR initiatives across its operations to avoid accusations of bluewashing. Anything less than integrating CSR strategy with core business strategy, across all its operations, leaves the firm open to scepticism towards the information it disseminates, and cynicism toward its motivations (e.g., Du et al., 2007 and Pirsch et al., 2007). Ensuring this integration occurs, that is, making CSR routine across all operating activities, is the role of marketing. Letting key audiences know about this is the role of corporate marketing communications. Corporate image advertising is increasingly serving this role. Corporate image advertising is a direct communication technique firms can use to build awareness and preference for the corporate brand, and influence the formation of a winning reputation. Communicating a winning CSR-based image via this communication technique is, however, problematic. In this paper, we have highlighted a problem for corporate image advertising being used to successfully give a sense of the CSR aspects of a firm’s identity Heartened by evidence that consumers will reward socially responsible business (e.g., Lichtenstein et al., 2004, Luo and Bhattacharya, 2006 and Pirsch et al., 2007), firms are turning to their CSR initiatives to establish credibility, inspire trust, and bolster their reputations with a range of stakeholders, including consumers (Becker-Olsen et al., 2006 and Pirsch et al., 2007). Marketing communicators are increasing their use of corporate image advertising campaigns to get their CSR messages into the marketplace (McIntyre, 2007), belitving it plays an important role in reputation development.