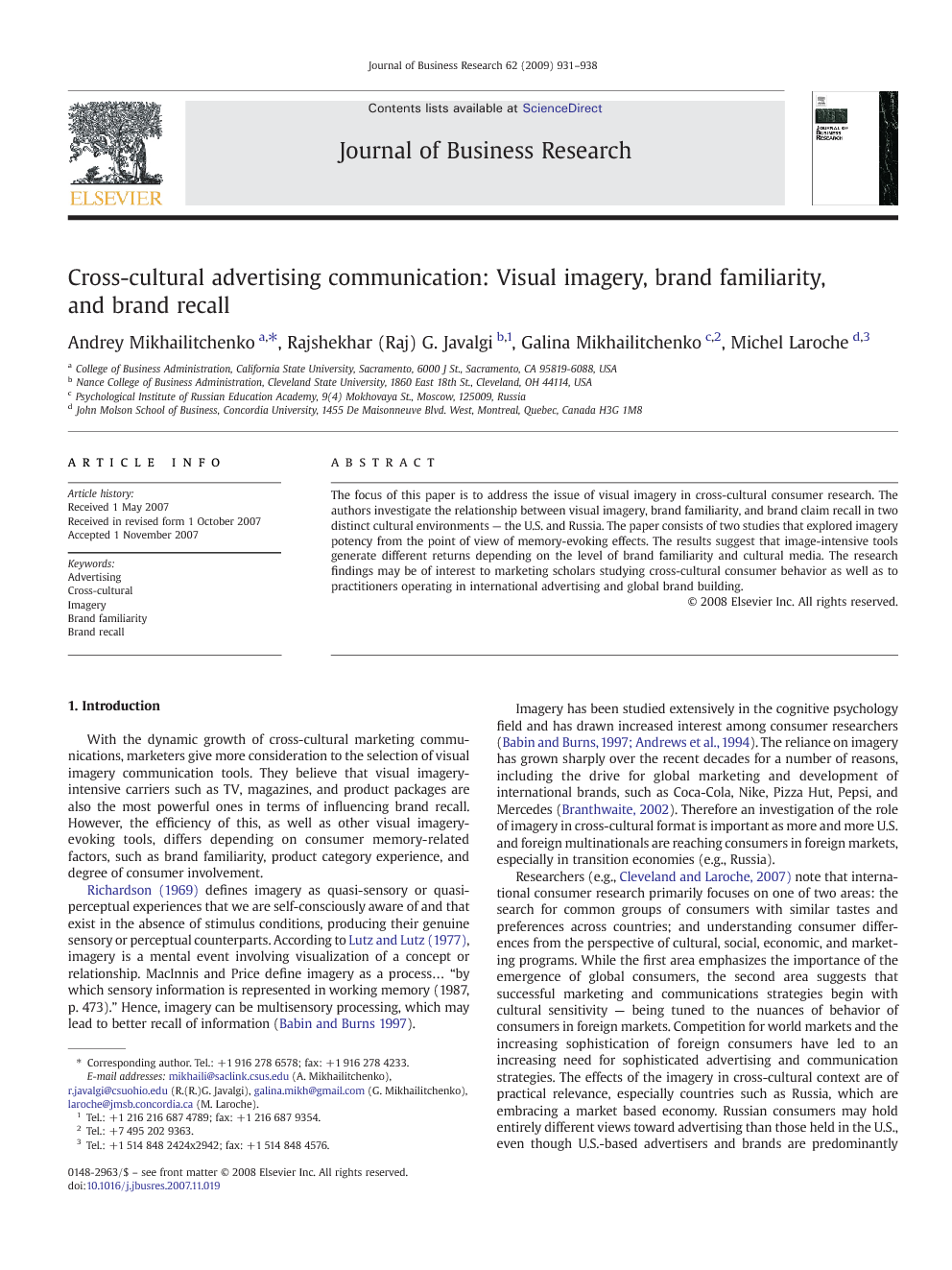 The focus of this paper is to address the issue of visual imagery in cross-cultural consumer research. The authors investigate the relationship between visual imagery, brand familiarity, and brand claim recall in two distinct cultural environments — the U.S. and Russia. The paper consists of two studies that explored imagery potency from the point of view of memory-evoking effects. The results suggest that image-intensive tools generate different returns depending on the level of brand familiarity and cultural media. The research findings may be of interest to marketing scholars studying cross-cultural consumer behavior as well as to practitioners operating in international advertising and global brand building.

With the dynamic growth of cross-cultural marketing communications, marketers give more consideration to the selection of visual imagery communication tools. They believe that visual imagery-intensive carriers such as TV, magazines, and product packages are also the most powerful ones in terms of influencing brand recall. However, the efficiency of this, as well as other visual imagery-evoking tools, differs depending on consumer memory-related factors, such as brand familiarity, product category experience, and degree of consumer involvement. Richardson (1969) defines imagery as quasi-sensory or quasi-perceptual experiences that we are self-consciously aware of and that exist in the absence of stimulus conditions, producing their genuine sensory or perceptual counterparts. According to Lutz and Lutz (1977), imagery is a mental event involving visualization of a concept or relationship. MacInnis and Price define imagery as a process… “by which sensory information is represented in working memory (1987, p. 473).” Hence, imagery can be multisensory processing, which may lead to better recall of information (Babin and Burns 1997). Imagery has been studied extensively in the cognitive psychology field and has drawn increased interest among consumer researchers (Babin and Burns, 1997 and Andrews et al., 1994). The reliance on imagery has grown sharply over the recent decades for a number of reasons, including the drive for global marketing and development of international brands, such as Coca-Cola, Nike, Pizza Hut, Pepsi, and Mercedes (Branthwaite, 2002). Therefore an investigation of the role of imagery in cross-cultural format is important as more and more U.S. and foreign multinationals are reaching consumers in foreign markets, especially in transition economies (e.g., Russia).

This study addressed the issue of imagery potency from the point of view of memory-evoking effects under different levels of brand familiarity within different cultural contexts. The results document differential impact of the imagery on brand recall: it is higher for low- and lower for high-familiarity conditions. In cross-cultural settings, on Russian market brand recall — evoking ability of imagery found out to be less than in the U.S. From a theoretical perspective, the findings of the study are consistent with earlier research investigating the effects of brand familiarity and imagery communication on brand recall (Babin and Burns, 1997, Burns et al., 1993 and Branthwaite, 2002) as well as with cross-cultural advertising and consumer behavior studies (Andrews and Lysonski, 1991, Andrews et al., 1994 and Mueller, 1992). At the same time, it builds on the existing research by providing a more nuanced view of when and how diminishing effects of imagery are likely to occur. The findings reported in this study attract attention to the issue of information processing resources that exist in the consumer mind. The high level of brand familiarity creates the strong brand-related schema that can use the cognitive capacity and interfere in the elaboration of the new image-evoked information. In contrast, the absence (or weakness) of such a schema for unfamiliar brands increases the availability of cognitive resources needed for image elaborating activity. The literature both in social cognition (Carlston, 1980 and Lingle and Ostrom, 1979) and consumer behavior (Kardes, 1986 and Britton and Tesser, 1982) developed this theoretical approach. The results of this study provide additional evidence for its further development and operationalization.