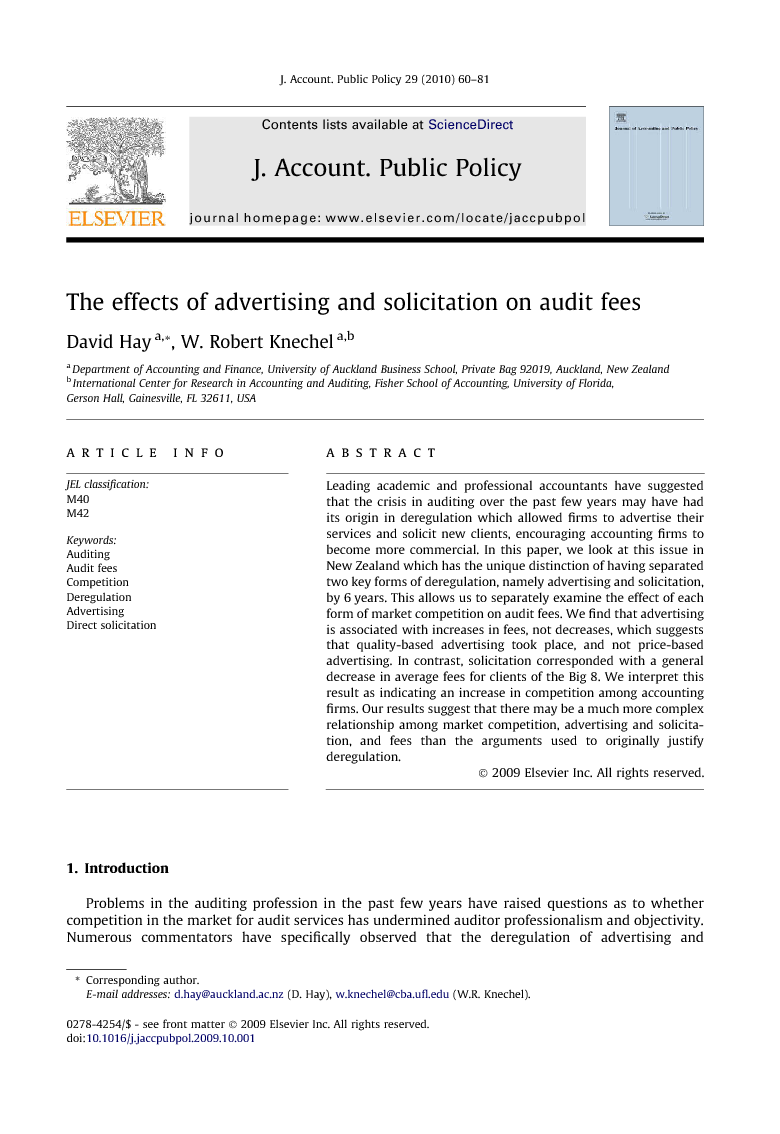 Leading academic and professional accountants have suggested that the crisis in auditing over the past few years may have had its origin in deregulation which allowed firms to advertise their services and solicit new clients, encouraging accounting firms to become more commercial. In this paper, we look at this issue in New Zealand which has the unique distinction of having separated two key forms of deregulation, namely advertising and solicitation, by 6 years. This allows us to separately examine the effect of each form of market competition on audit fees. We find that advertising is associated with increases in fees, not decreases, which suggests that quality-based advertising took place, and not price-based advertising. In contrast, solicitation corresponded with a general decrease in average fees for clients of the Big 8. We interpret this result as indicating an increase in competition among accounting firms. Our results suggest that there may be a much more complex relationship among market competition, advertising and solicitation, and fees than the arguments used to originally justify deregulation.

Problems in the auditing profession in the past few years have raised questions as to whether competition in the market for audit services has undermined auditor professionalism and objectivity. Numerous commentators have specifically observed that the deregulation of advertising and solicitation forced auditors to become more competitive, and suggest that this may have contributed to a loss of professionalism associated with the recent wave of audit failures around the world (Imhoff, 2003, Wyatt, 2004, Zeff, 2003a, Zeff, 2003b, Palepu and Healy, 2003 and Healy and Palepu, 2003). For example, Imhoff (2003, p. 119) states: “In the mid-1970s, in response to pressures from the Federal Trade Commission, the rules of the AICPA changed to permit CPA firms to advertise. Aggressive open competition for audit clients soon became a new attribute of the accounting profession. Firms then cut costs, streamlined audits, went after internal audit work and ‘turned the audit into a commodity’.”1Palepu and Healy (2003) observe that regulatory changes “required the profession to change its standards to allow audit firms to advertise and compete” and that this “created substantial pressure for audit firms to cut costs and seek alternative revenue sources” (Palepu and Healy, 2003, pp. 19–20). There is some research evidence consistent with these views, as prior studies have shown that the deregulation of audit markets was followed by lower fees in the US (Maher et al., 1992, using data from 1977–1981) and Australia (Craswell, 1992, using data from 1980–1989).2 While most deregulation addressed advertising and solicitation simultaneously, the respective effects on competition, product promotion, pricing and audit quality might differ. Deregulation was based on the premise that advertising and solicitation would lead to increased competition and lower prices. However, more recent research in advertising (Klein and Leffler, 1981 and Abela and Farris, 2000) suggests that an opposite effect might occur, because advertising facilitates branding and service differentiation that could lead to increased market power and higher prices when firms are successful in differentiating their services or developing brand value. Solicitation might also lead to higher prices if used to further differentiate a firm’s services. On the other hand, advertising and solicitation could make the negotiation and contracting of audit service levels and fees more efficient, resulting in lower fees. Advertising may reduce information asymmetries that favor sellers while solicitation may encourage auditors to search out and contact potential clients to whom they can offer better or more efficient service. The effect on the market would be similar to increasing the supply of service providers available to any given client since a competitor auditor can observe when current fees charged by an incumbent auditor appear to be unusually high, and permitting solicitation allows the competitor to act upon that knowledge by approaching the client.

In this paper, we discuss how the market for audit services may respond to changes in regulations affecting audit fees, namely, the removal of restrictions on advertising and solicitation of clients. While advertising can be either quality-based or price-based, marketing research and economic theory (Klein and Leffler, 1981 and Hahn, 2004) suggests that advertising in auditing could result in higher fees as firms used advertising to differentiate their services. Furthermore, the removal of restrictions on direct solicitation of clients by an auditor could lead to lower audit fees, especially for the largest accounting firms. Using a pooled sample from all years, including dummy variables for the years of the deregulatory events being examined, we find that advertising was followed by an overall increase in fees across the audit market, with the largest increases being observed for Big 8 firms. These results are consistent with marketing literature that predicts non-price advertising leads to higher prices. The pooled sample also shows that solicitation was followed by a decrease in fees attributable to the Big 8. Tests of switches show that significantly more switches led to fee decreases after solicitation, but not during the period when only advertising was allowed. Overall, these results support our four hypotheses and are consistent with the general pattern that advertising leads to fee increases and solicitation to fee decreases, especially for the Big 8.