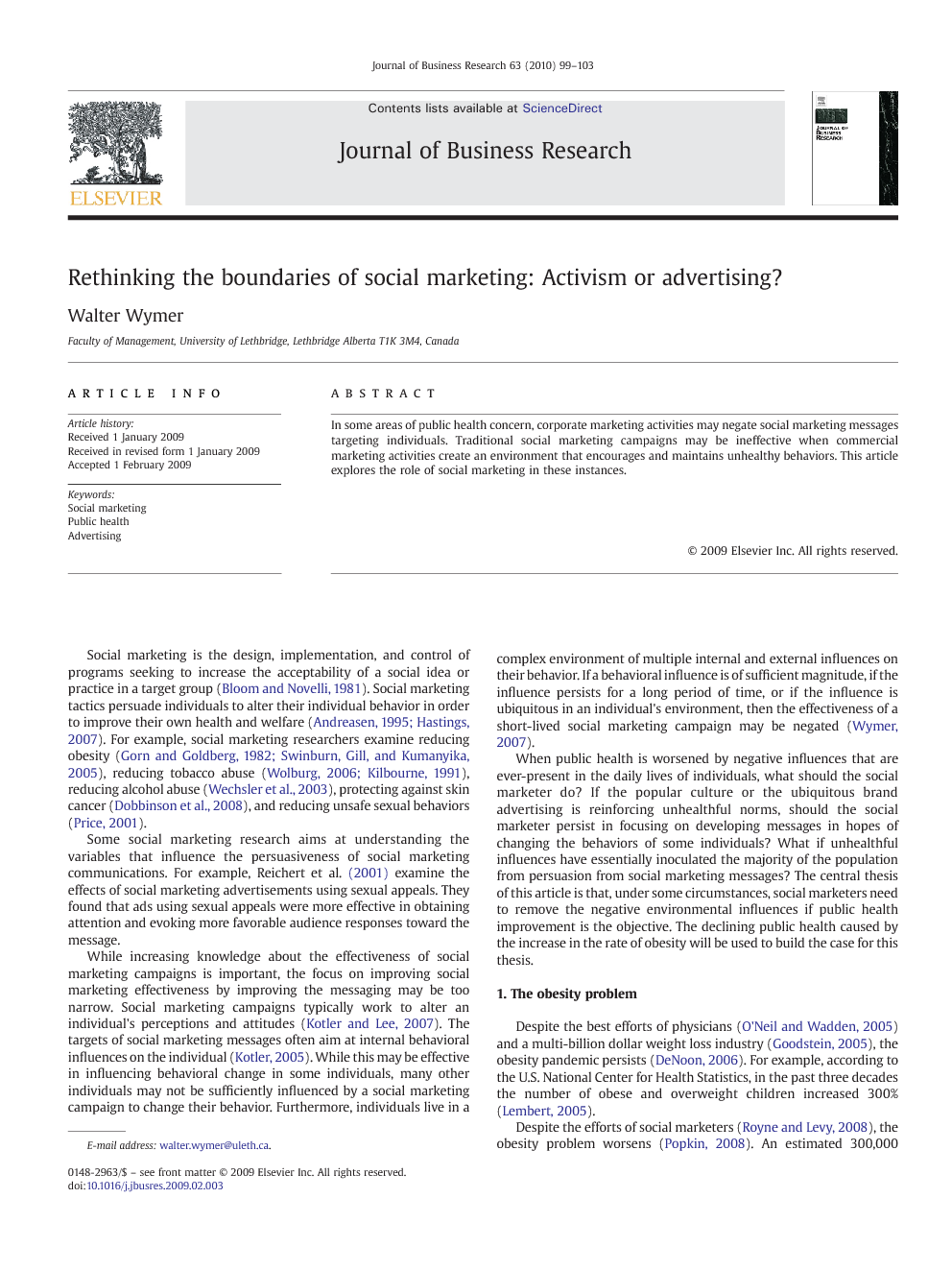 Despite the best efforts of physicians (O'Neil and Wadden, 2005) and a multi-billion dollar weight loss industry (Goodstein, 2005), the obesity pandemic persists (DeNoon, 2006). For example, according to the U.S. National Center for Health Statistics, in the past three decades the number of obese and overweight children increased 300% (Lembert, 2005). Despite the efforts of social marketers (Royne and Levy, 2008), the obesity problem worsens (Popkin, 2008). An estimated 300,000 Americans die each year from obesity (Maddock, 2004). In America, the majority of adults, regardless of age, incomes, educational levels, and census categories are overweight (Nestle, 2003). Multiple forces encourage obesity (NIDDK, 2006). In general, occupations and lifestyles are less physically active (Hu, 2008). People are working hours more hours each week (Rhode Island Department of Health, 2008). Individuals experience more job stress (Schwartz, 2007). Despite these contributors to the obesity public health crises, however, the largest contributor to obesity is related to industry marketing activities: the increased availability of junk food; increased portion sizes; food advertising; fast-food promotion; and the low cost of high fat, high calorie foods (Grier and Kumanyika, 2008). The scientific community now recognizes the marketing of unhealthy foods as a major cause of obesity (Quigley and Watts, 2005, Wootan Margo, 2006 and World Health Organization, 2003).

Social marketers must decide what their role is? In a market driven economy, industry tends to work opportunistically to maximize profits. The system may work well for many consumer goods, but not for those products that affect health, safety, or the greater social good (Ludwig and Nestle, 2008). What is the role of social marketers when the actions of industry harm the public health and welfare? Traditionally, social marketers work at the individual level. Social marketers craft and disseminate messages to persuade individuals to discontinue unhealthful behaviors or to adopt healthful behaviors. However, this focus on the individual may have limited the effectiveness of social marketing. Social marketing effectiveness is negated if the context within which individual behavior is influenced is ignored. The medical community is recognizing that society needs to focus more on the marketing that creates an unhealthy context and less on the individual (Quigley and Watts, 2005). In the obesity example, Eggers and Swinburn (1997) argue that strategies need to shift from viewing obesity as an individual disorder to considering it as a normal response to an abnormal environment. Individuals' ability to make healthy choices declines when their choice environment actively promotes less healthy options. Hoek and Gendall (2006) recommend that social marketers take an atypical approach, one that begins with regulatory change and concludes with education campaigns targeted to individuals. They believe that, to be effective, social marketers must first create a healthy context for the individual and then target the individual with educational messages.