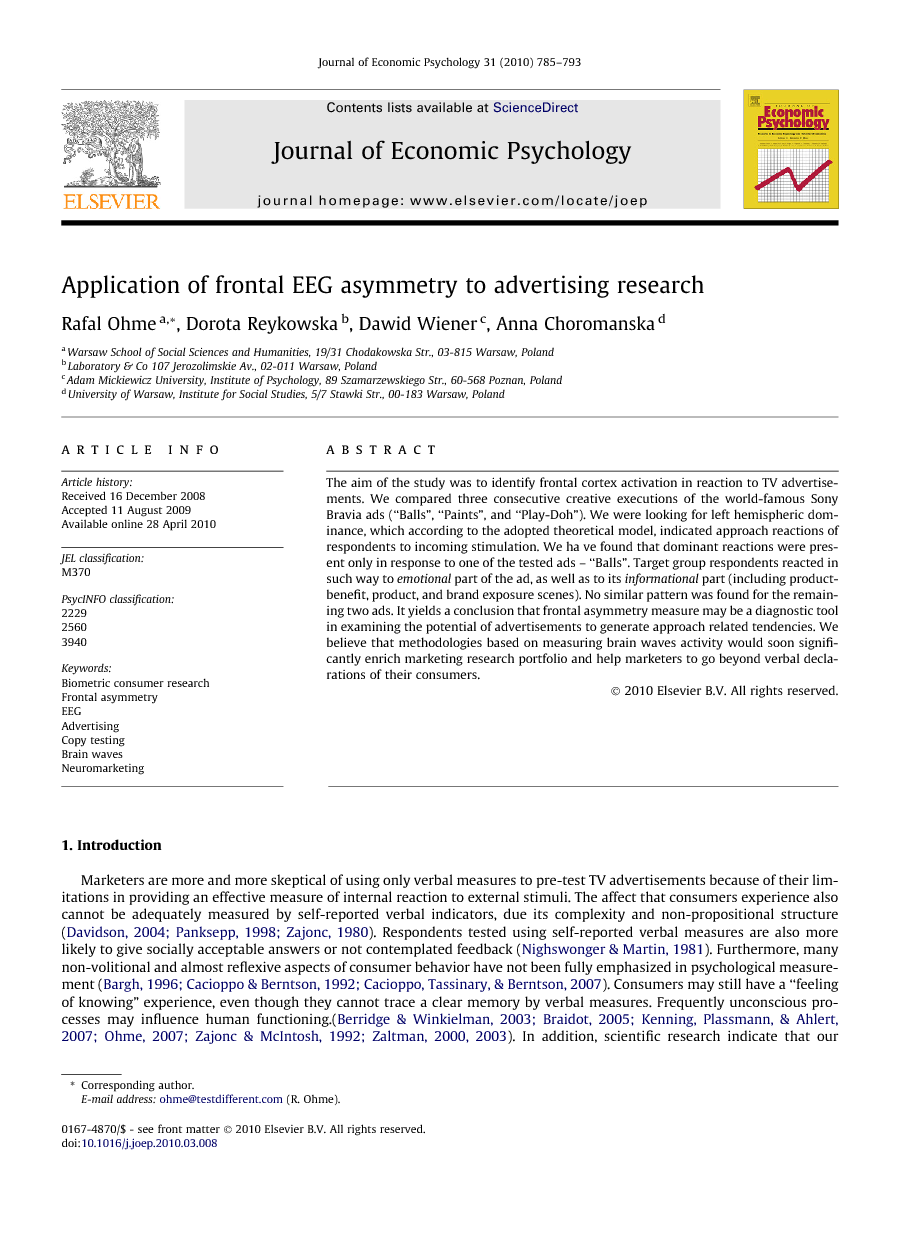 The aim of the study was to identify frontal cortex activation in reaction to TV advertisements. We compared three consecutive creative executions of the world-famous Sony Bravia ads (“Balls”, “Paints”, and “Play-Doh”). We were looking for left hemispheric dominance, which according to the adopted theoretical model, indicated approach reactions of respondents to incoming stimulation. We have found that dominant reactions were present only in response to one of the tested ads – “Balls”. Target group respondents reacted in such way to emotional part of the ad, as well as to its informational part (including product-benefit, product, and brand exposure scenes). No similar pattern was found for the remaining two ads. It yields a conclusion that frontal asymmetry measure may be a diagnostic tool in examining the potential of advertisements to generate approach related tendencies. We believe that methodologies based on measuring brain waves activity would soon significantly enrich marketing research portfolio and help marketers to go beyond verbal declarations of their consumers.

Marketers are more and more skeptical of using only verbal measures to pre-test TV advertisements because of their limitations in providing an effective measure of internal reaction to external stimuli. The affect that consumers experience also cannot be adequately measured by self-reported verbal indicators, due its complexity and non-propositional structure (Davidson, 2004, Panksepp, 1998 and Zajonc, 1980). Respondents tested using self-reported verbal measures are also more likely to give socially acceptable answers or not contemplated feedback (Nighswonger & Martin, 1981). Furthermore, many non-volitional and almost reflexive aspects of consumer behavior have not been fully emphasized in psychological measurement (Bargh, 1996, Cacioppo and Berntson, 1992 and Cacioppo et al., 2007). Consumers may still have a “feeling of knowing” experience, even though they cannot trace a clear memory by verbal measures. Frequently unconscious processes may influence human functioning.(Berridge and Winkielman, 2003, Braidot, 2005, Kenning et al., 2007, Ohme, 2007, Zajonc and McIntosh, 1992, Zaltman, 2000 and Zaltman, 2003). In addition, scientific research indicate that our “conscious window” starts to be fully opened in ca. 300 ms after the stimuli, what means that most events below this threshold which are registered by our brain cannot be reported verbally (Libet, 2004). However, there is compelling evidence that some psychological processes, particularly those which occur beyond our conscious awareness, could be better understood by analyzing the consumer’s brain and body responses, what in result points to utilizing different neuroscientific approaches to handle with this challenge (Ambler et al., 2004, Bechara, 2004, Damasio, 1994, Kenning et al., 2007, Ohme, 2003, Posner, 2004 and Smith and Kosslyn, 2007).

Our finding that only one of the three similar strategically and all highly praised marketing communications performs well on the approach dimension is relevant not only theoretically but also practically. It gives grounds to reconsider the tested ads and seek improvements for some of its imperfections. These findings would be very hard (if ever) to obtain via traditional consumer research methods, which are based on conscious declarations and consumers or advertisers introspection. Moreover, the observation that in “Balls” ad the scenes from the informational part, i.e. product-benefit, product, and brand (with animation) generated more approach related reactions than its emotional part are quite contrary to the existing theoretical knowledge and practitioners intuition on what is more and what is less emotionally engaging for consumers who watch TV commercials. Due to the exploratory nature of the study, our findings should be considered observational. Any further explanations of particular reaction patterns and their theoretical and practical implications would be premature at this time. At this early stage of development of the frontal asymmetry measure to advertising, anything that goes beyond methodical observation might be entering controversial and speculative grounds. However, when a comprehensive set of such observations (for each major product category) is collected for data mining we would be ready to propose reasonable explanations and possible predictions. In fact, we would try to establish which of the tested ads are probably more efficacious in forming mind-based brand equity (see: Hansen & Christensen, 2007).