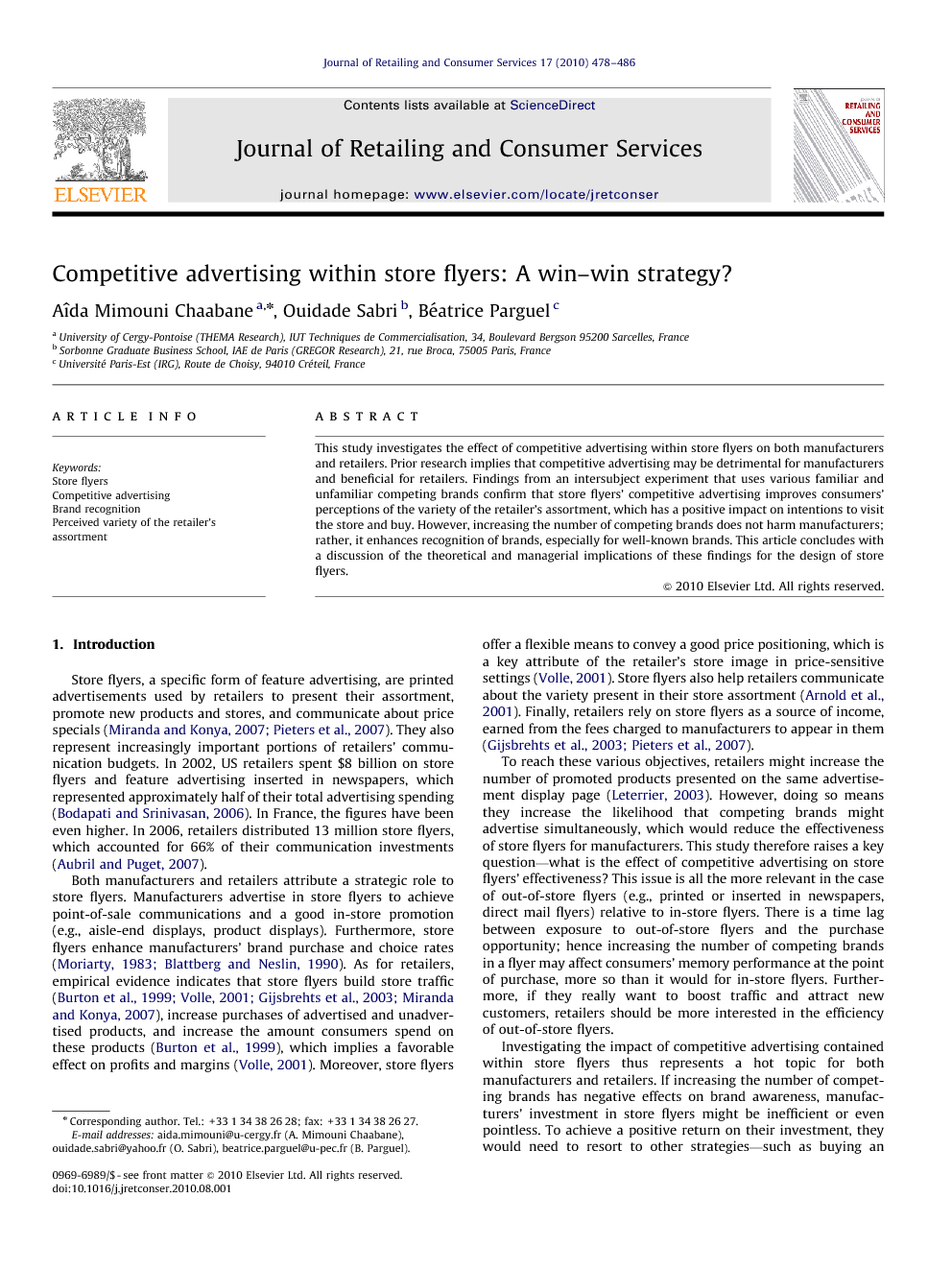 This study investigates the effect of competitive advertising within store flyers on both manufacturers and retailers. Prior research implies that competitive advertising may be detrimental for manufacturers and beneficial for retailers. Findings from an intersubject experiment that uses various familiar and unfamiliar competing brands confirm that store flyers’ competitive advertising improves consumers’ perceptions of the variety of the retailer’s assortment, which has a positive impact on intentions to visit the store and buy. However, increasing the number of competing brands does not harm manufacturers; rather, it enhances recognition of brands, especially for well-known brands. This article concludes with a discussion of the theoretical and managerial implications of these findings for the design of store flyers.

Store flyers, a specific form of feature advertising, are printed advertisements used by retailers to present their assortment, promote new products and stores, and communicate about price specials (Miranda and Konya, 2007 and Pieters et al., 2007). They also represent increasingly important portions of retailers’ communication budgets. In 2002, US retailers spent $8 billion on store flyers and feature advertising inserted in newspapers, which represented approximately half of their total advertising spending (Bodapati and Srinivasan, 2006). In France, the figures have been even higher. In 2006, retailers distributed 13 million store flyers, which accounted for 66% of their communication investments (Aubril and Puget, 2007). Both manufacturers and retailers attribute a strategic role to store flyers. Manufacturers advertise in store flyers to achieve point-of-sale communications and a good in-store promotion (e.g., aisle-end displays, product displays). Furthermore, store flyers enhance manufacturers’ brand purchase and choice rates (Moriarty, 1983 and Blattberg and Neslin, 1990). As for retailers, empirical evidence indicates that store flyers build store traffic (Burton et al., 1999, Volle, 2001, Gijsbrehts et al., 2003 and Miranda and Konya, 2007), increase purchases of advertised and unadvertised products, and increase the amount consumers spend on these products (Burton et al., 1999), which implies a favorable effect on profits and margins (Volle, 2001). Moreover, store flyers offer a flexible means to convey a good price positioning, which is a key attribute of the retailer’s store image in price-sensitive settings (Volle, 2001). Store flyers also help retailers communicate about the variety present in their store assortment (Arnold et al., 2001). Finally, retailers rely on store flyers as a source of income, earned from the fees charged to manufacturers to appear in them (Gijsbrehts et al., 2003 and Pieters et al., 2007).

The goal of this research has been to examine the effect of competitive advertising within store flyers on manufacturers and retailers. We hypothesized that this effect would be negative for the former (i.e., decreased memory performance for the brand and promotional offer) and positive for the latter (i.e., better perceptions of assortment variety, higher intentions to visit and buy). The experimental results reveal some surprising and challenging conclusions though. We confirm our rationale about retailers, in that we demonstrate competitive advertising improves perceptions of the variety of retailer’s assortment, which has a positive impact on intentions to visit the store and buy. However, the findings in relation to the manufacturers do not support previous empirical results from advertising literature. Specifically, we find that manufacturers’ brands benefit from high levels of competitive advertising within store flyers; brand recognition increases when subjects examine store flyers that promote many competing brands on the same page. As we discussed in the conceptual section, consumers generally choose to be exposed to store flyers, such that they may be more involved in processing the information, which should increase their resistance to competitive advertising. Previous competitive advertising research mainly deals with traditional media (magazines, television), for which consumers have become quite sophisticated in avoiding advertisements through technology (e.g., remote control) or distractions during commercial breaks (Lee and Lee, 2007). This difference in processing goals may explain why brand recognition, in the case of store flyers, is resistant to the negative effect of competitive advertising. Moreover, while viewing the pages that promoted several competing brands, respondents may have associated this high variety with a good deal in the product class. Attracted by this signal effect, they may have examined the pages with more interest and treated the information more extensively, which resulted in their higher attention to the clutter.