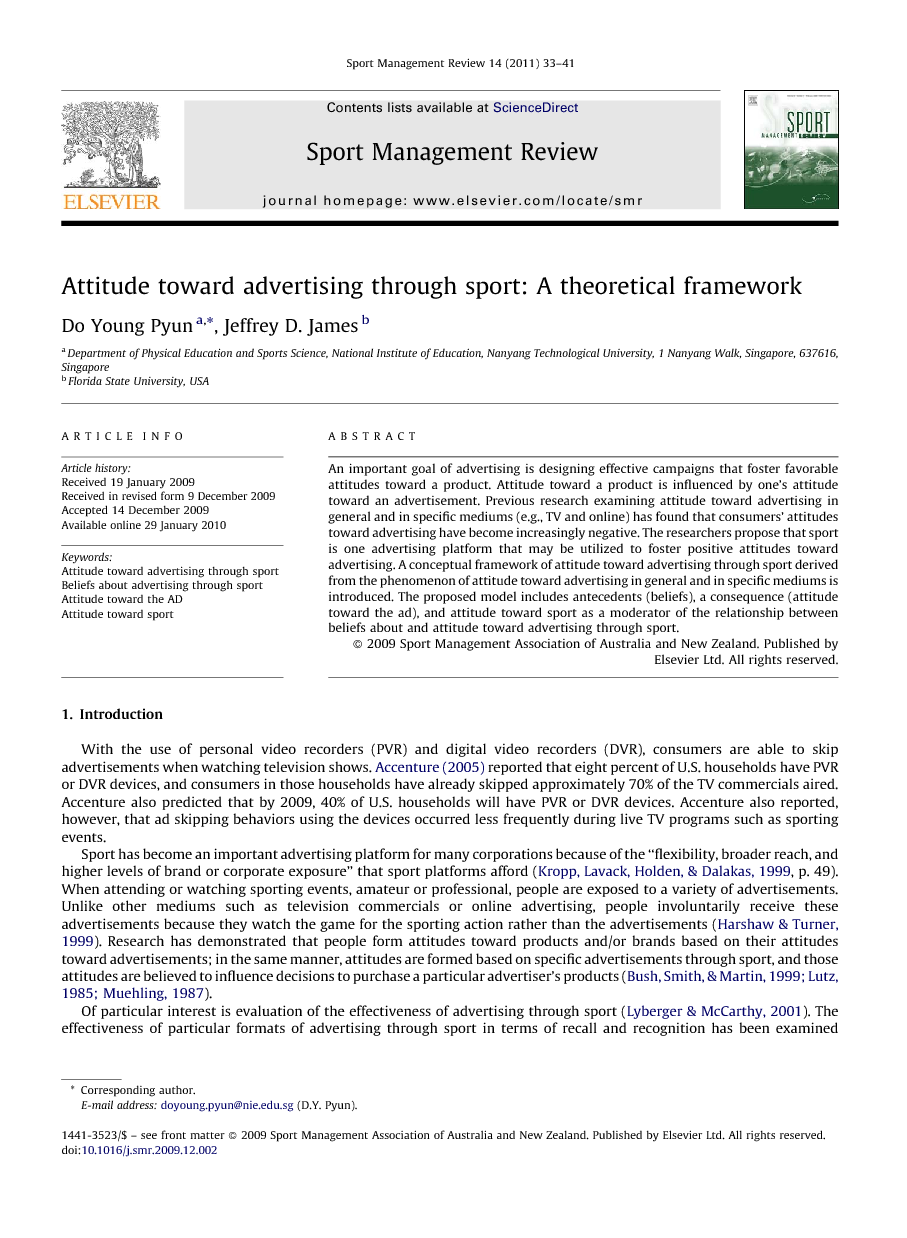 With the use of personal video recorders (PVR) and digital video recorders (DVR), consumers are able to skip advertisements when watching television shows. Accenture (2005) reported that eight percent of U.S. households have PVR or DVR devices, and consumers in those households have already skipped approximately 70% of the TV commercials aired. Accenture also predicted that by 2009, 40% of U.S. households will have PVR or DVR devices. Accenture also reported, however, that ad skipping behaviors using the devices occurred less frequently during live TV programs such as sporting events. Sport has become an important advertising platform for many corporations because of the “flexibility, broader reach, and higher levels of brand or corporate exposure” that sport platforms afford (Kropp, Lavack, Holden, & Dalakas, 1999, p. 49). When attending or watching sporting events, amateur or professional, people are exposed to a variety of advertisements. Unlike other mediums such as television commercials or online advertising, people involuntarily receive these advertisements because they watch the game for the sporting action rather than the advertisements (Harshaw & Turner, 1999). Research has demonstrated that people form attitudes toward products and/or brands based on their attitudes toward advertisements; in the same manner, attitudes are formed based on specific advertisements through sport, and those attitudes are believed to influence decisions to purchase a particular advertiser's products (Bush et al., 1999, Lutz, 1985 and Muehling, 1987).

People are bombarded daily with a tremendous volume of advertisements, and advertisers continue to develop new techniques (e.g., virtual advertising) and utilize existing facilities as new advertising mediums (e.g., public transportations, bridges, stations, and airports). As consumers strive to tune out advertising, advertisers work to develop more stimulating and aggressive campaigns to capture the attention of consumers. As a result, consumers have reported a growing aversion toward advertising in general (Andrews, 1989, Mehta, 2000, Muehling, 1987, Zanot, 1981 and Zanot, 1984). Consumers’ attitudes toward TV commercials were more negative than advertising in general (Alwitt and Prabhaker, 1992 and Mittal, 1994), and their attitudes toward online advertising such as spam mails and pop-ups have been found to be extremely negative (Burns, 2003 and Grimes et al., 2003). A challenge for advertisers is to create effective campaigns which do not elicit negative reactions from consumers and generate a positive attitude toward the advertisement, which are directly related with product attitudes and sales of the product promoted (Lutz, 1985 and Bush et al., 1999). While it may not be suitable for all products, sport does offer a viable platform for many organizations to consider as they strive to elicit positive attitudes toward particular products. The proposed model is based on conceptual and empirical evidence that consumers’ attitudes toward advertising through sport are different than the attitudes they possess about advertising in general or advertising through traditional mediums (Pyun, James, & Kwon, 2008). The strong emotional and psychological connection consumers form with sports and sports teams are expected to positively influence or even bias beliefs and attitudes toward advertising through sport.