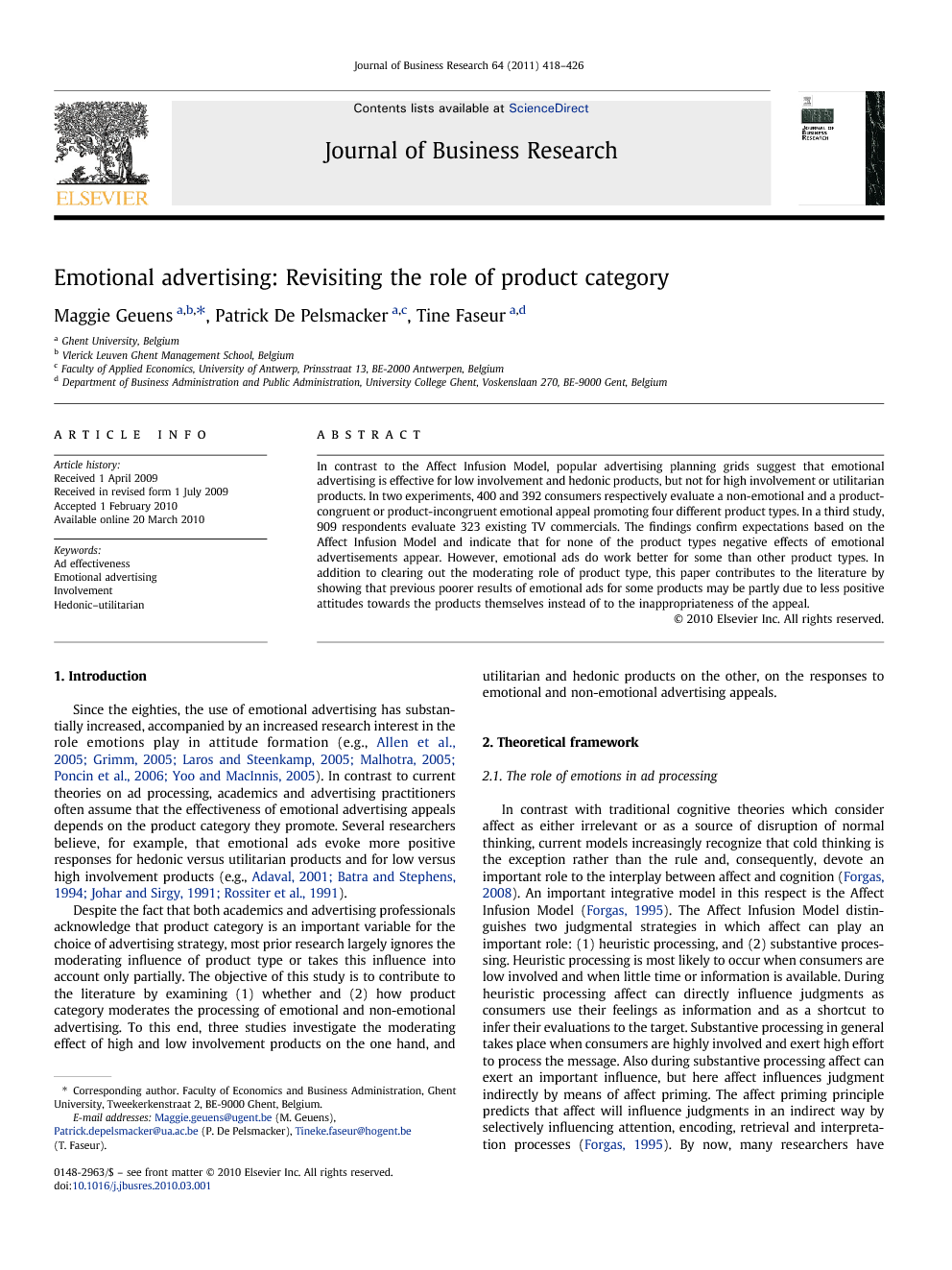 In contrast to the Affect Infusion Model, popular advertising planning grids suggest that emotional advertising is effective for low involvement and hedonic products, but not for high involvement or utilitarian products. In two experiments, 400 and 392 consumers respectively evaluate a non-emotional and a product-congruent or product-incongruent emotional appeal promoting four different product types. In a third study, 909 respondents evaluate 323 existing TV commercials. The findings confirm expectations based on the Affect Infusion Model and indicate that for none of the product types negative effects of emotional advertisements appear. However, emotional ads do work better for some than other product types. In addition to clearing out the moderating role of product type, this paper contributes to the literature by showing that previous poorer results of emotional ads for some products may be partly due to less positive attitudes towards the products themselves instead of to the inappropriateness of the appeal.

Since the eighties, the use of emotional advertising has substantially increased, accompanied by an increased research interest in the role emotions play in attitude formation (e.g., Allen et al., 2005, Grimm, 2005, Laros and Steenkamp, 2005, Malhotra, 2005, Poncin et al., 2006 and Yoo and MacInnis, 2005). In contrast to current theories on ad processing, academics and advertising practitioners often assume that the effectiveness of emotional advertising appeals depends on the product category they promote. Several researchers believe, for example, that emotional ads evoke more positive responses for hedonic versus utilitarian products and for low versus high involvement products (e.g., Adaval, 2001, Batra and Stephens, 1994, Johar and Sirgy, 1991 and Rossiter et al., 1991). Despite the fact that both academics and advertising professionals acknowledge that product category is an important variable for the choice of advertising strategy, most prior research largely ignores the moderating influence of product type or takes this influence into account only partially. The objective of this study is to contribute to the literature by examining (1) whether and (2) how product category moderates the processing of emotional and non-emotional advertising. To this end, three studies investigate the moderating effect of high and low involvement products on the one hand, and utilitarian and hedonic products on the other, on the responses to emotional and non-emotional advertising appeals.