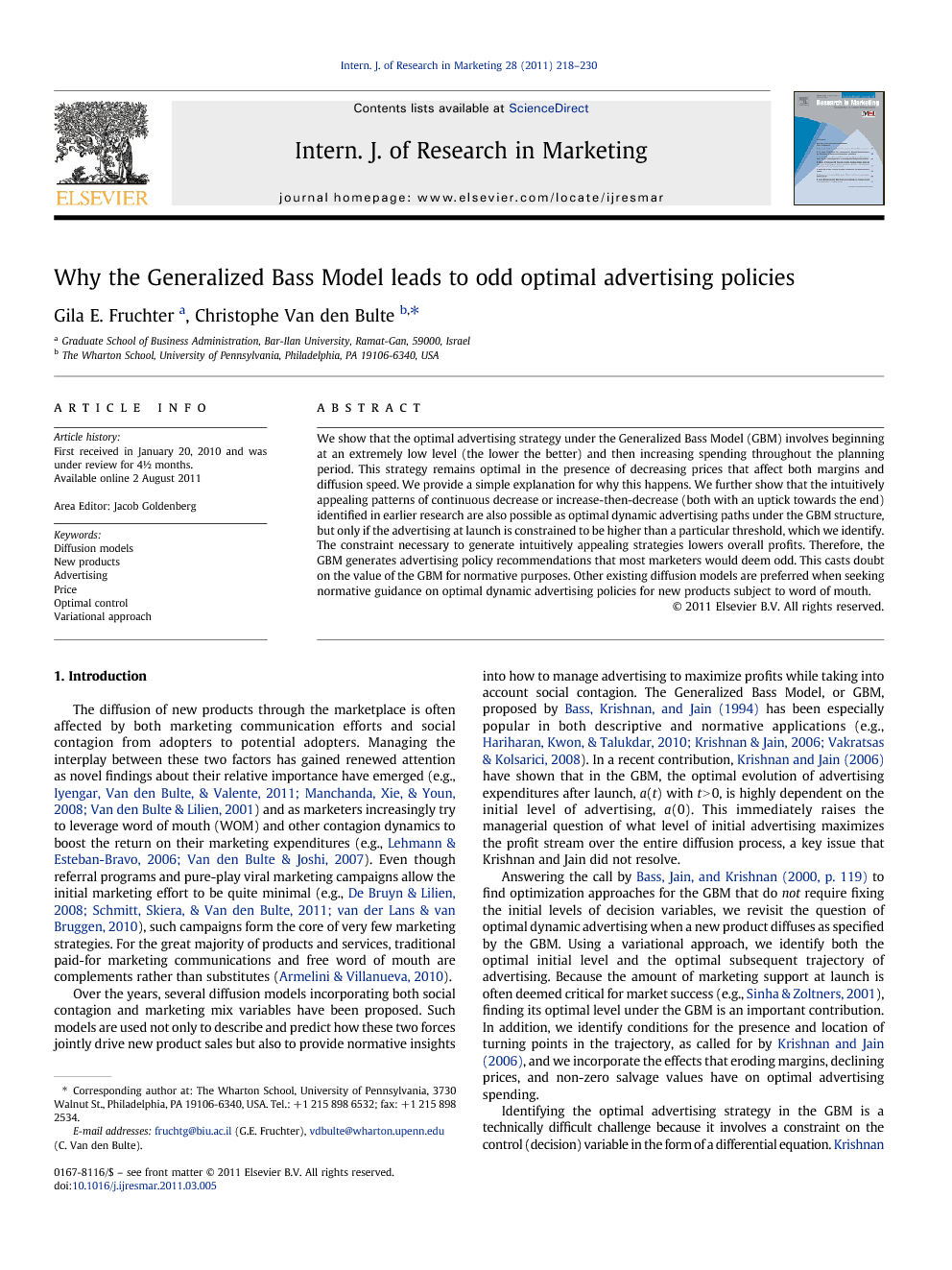 We show that the optimal advertising strategy under the Generalized Bass Model (GBM) involves beginning at an extremely low level (the lower the better) and then increasing spending throughout the planning period. This strategy remains optimal in the presence of decreasing prices that affect both margins and diffusion speed. We provide a simple explanation for why this happens. We further show that the intuitively appealing patterns of continuous decrease or increase-then-decrease (both with an uptick towards the end) identified in earlier research are also possible as optimal dynamic advertising paths under the GBM structure, but only if the advertising at launch is constrained to be higher than a particular threshold, which we identify. The constraint necessary to generate intuitively appealing strategies lowers overall profits. Therefore, the GBM generates advertising policy recommendations that most marketers would deem odd. This casts doubt on the value of the GBM for normative purposes. Other existing diffusion models are preferred when seeking normative guidance on optimal dynamic advertising policies for new products subject to word of mouth.

The diffusion of new products through the marketplace is often affected by both marketing communication efforts and social contagion from adopters to potential adopters. Managing the interplay between these two factors has gained renewed attention as novel findings about their relative importance have emerged (e.g., Iyengar et al., 2011, Manchanda et al., 2008 and Van den Bulte and Lilien, 2001) and as marketers increasingly try to leverage word of mouth (WOM) and other contagion dynamics to boost the return on their marketing expenditures (e.g., Lehmann and Esteban-Bravo, 2006 and Van den Bulte and Joshi, 2007). Even though referral programs and pure-play viral marketing campaigns allow the initial marketing effort to be quite minimal (e.g., De Bruyn and Lilien, 2008, Schmitt et al., 2011 and van der Lans and van Bruggen, 2010), such campaigns form the core of very few marketing strategies. For the great majority of products and services, traditional paid-for marketing communications and free word of mouth are complements rather than substitutes (Armelini & Villanueva, 2010). Over the years, several diffusion models incorporating both social contagion and marketing mix variables have been proposed. Such models are used not only to describe and predict how these two forces jointly drive new product sales but also to provide normative insights into how to manage advertising to maximize profits while taking into account social contagion. The Generalized Bass Model, or GBM, proposed by Bass, Krishnan, and Jain (1994) has been especially popular in both descriptive and normative applications (e.g., Hariharan et al., 2010, Krishnan and Jain, 2006 and Vakratsas and Kolsarici, 2008). In a recent contribution, Krishnan and Jain (2006) have shown that in the GBM, the optimal evolution of advertising expenditures after launch, a(t) with t > 0, is highly dependent on the initial level of advertising, a(0). This immediately raises the managerial question of what level of initial advertising maximizes the profit stream over the entire diffusion process, a key issue that Krishnan and Jain did not resolve.

We identify the optimal dynamic advertising strategy for a new product that diffuses according to the Generalized Bass Model (GBM). Prior research by Krishnan and Jain (2006) dealt with this challenge only partially, leaving the problem of initial spending unsolved even though prior experience shows that marketing support at launch is of critical importance (e.g., Sinha & Zoltners, 2001). Using a variational approach, we solve the problem of finding the optimal level of advertising spending at launch and the optimal subsequent evolution, as called for by Bass et al. (2000). We also derive conditions for the presence and location of switching times (or turning points) in the optimal trajectory, as called for by Krishnan and Jain (2006), and properly account for the salvage value at the end of the firm's planning period. We have seven new insights. First, the optimal policy always involves advertising as little as possible at launch, regardless of how advertising levels evolve later. Second, if the advertising at launch is allowed to be below a specific threshold, which we identify, the optimal policy is to always increase advertising. Third, numerical analyses indicate that this threshold, the maximum value of advertising at launch for a subsequent monotonic increase to be the optimal policy, increases with the effectiveness of advertising, β, and the discount rate, r, and decreases with the maximum growth rate of advertising, View the MathML sourceR¯. Fourth, if the advertising at launch is too high for a monotonic increase to be optimal, then the optimal advertising path is either decrease–increase or increase–decrease–increase, even when margins are constant over time. Fifth, conditions for the switching times can be identified analytically as functions of the diffusion parameters, advertising and price effectiveness, advertising growth/reduction and price erosion rates, and discount rate. Sixth, decreasing prices, affecting both margins and diffusion speed, do not affect the main result that the best strategy is to set initial advertising extremely low and then increase advertising throughout. Finally, ignoring the salvage value stemming from remaining adoptions leads to overinvestment rather than underinvestment in advertising, which is the opposite pattern of applications where salvage value stems from next-generation or repeat purchases by acquired customers rather than from adoptions from yet to be acquired customers. Each of these seven results goes beyond the earlier contribution by Krishnan and Jain (2006) that the optimal trajectory a*(t) for t > 0 is highly dependent on a(0).