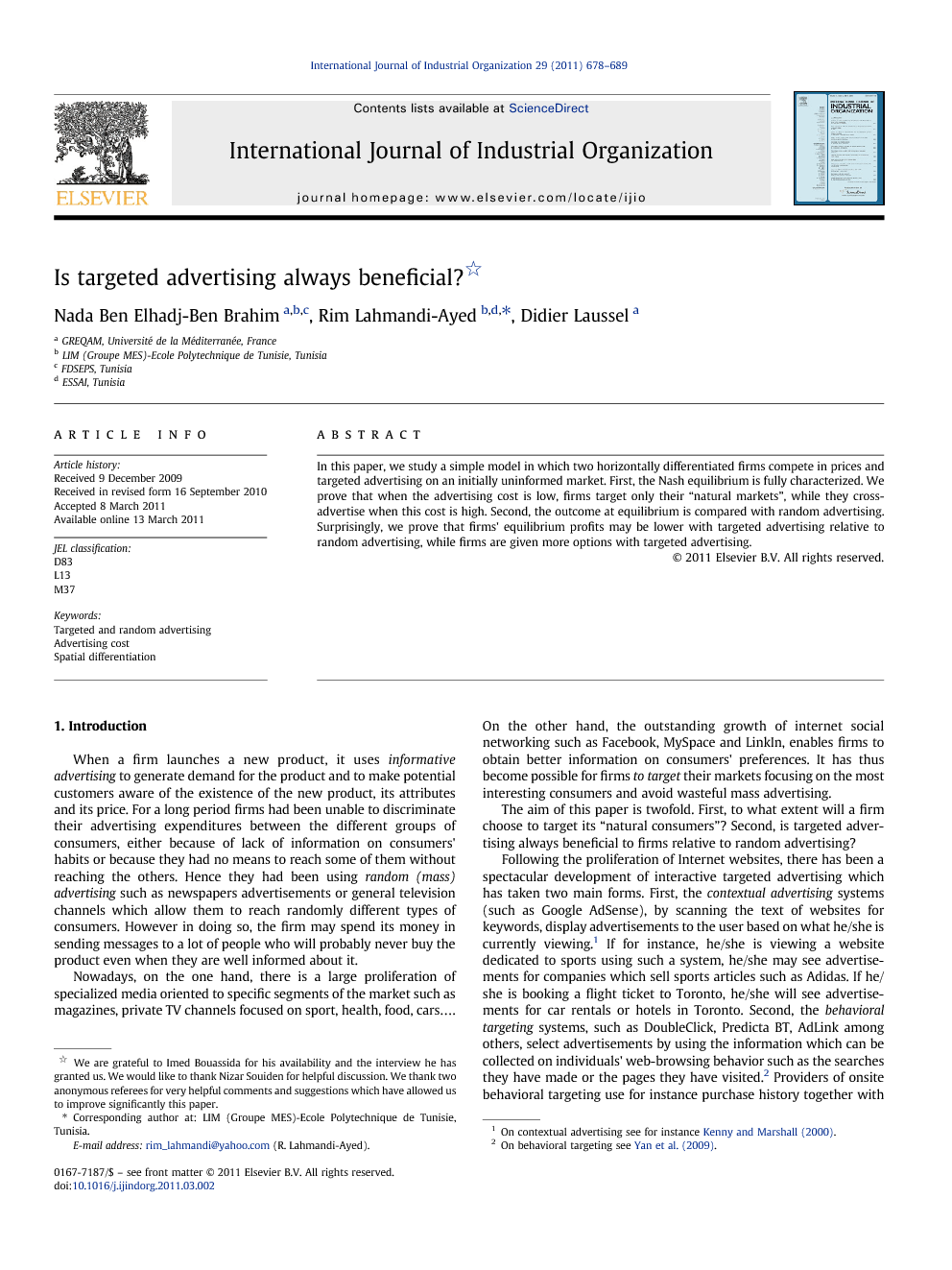 When a firm launches a new product, it uses informative advertising to generate demand for the product and to make potential customers aware of the existence of the new product, its attributes and its price. For a long period firms had been unable to discriminate their advertising expenditures between the different groups of consumers, either because of lack of information on consumers' habits or because they had no means to reach some of them without reaching the others. Hence they had been using random (mass) advertising such as newspapers advertisements or general television channels which allow them to reach randomly different types of consumers. However in doing so, the firm may spend its money in sending messages to a lot of people who will probably never buy the product even when they are well informed about it. Nowadays, on the one hand, there is a large proliferation of specialized media oriented to specific segments of the market such as magazines, private TV channels focused on sport, health, food, cars…. On the other hand, the outstanding growth of internet social networking such as Facebook, MySpace and LinkIn, enables firms to obtain better information on consumers' preferences. It has thus become possible for firms to target their markets focusing on the most interesting consumers and avoid wasteful mass advertising. The aim of this paper is twofold. First, to what extent will a firm choose to target its “natural consumers”? Second, is targeted advertising always beneficial to firms relative to random advertising? Following the proliferation of Internet websites, there has been a spectacular development of interactive targeted advertising which has taken two main forms. First, the contextual advertising systems (such as Google AdSense), by scanning the text of websites for keywords, display advertisements to the user based on what he/she is currently viewing.1 If for instance, he/she is viewing a website dedicated to sports using such a system, he/she may see advertisements for companies which sell sports articles such as Adidas. If he/she is booking a flight ticket to Toronto, he/she will see advertisements for car rentals or hotels in Toronto. Second, the behavioral targeting systems, such as DoubleClick, Predicta BT, AdLink among others, select advertisements by using the information which can be collected on individuals' web-browsing behavior such as the searches they have made or the pages they have visited.2 Providers of onsite behavioral targeting use for instance purchase history together with other data in order to further individualize advertisements. Media planners are able by collecting information on different sites, to build up a likely demographic make-up of internet users and to “sell” audiences (for instance a certain number of teenagers, of women between 35 and 50, of men above 40…) rather than sites.

In this paper, we have presented a modified duopoly version of Grossman and Shapiro (1984), the seminal paper on informative advertising. We analyzed the transition from random advertising to targeted advertising and investigated through this model, the benefits of targeted advertising for firms. This paper has argued that, when firms have the ability to target each type of consumers, each firm chooses at equilibrium to differentiate its advertising strategies between its natural market and its rival's one. The full characterization of price-advertising equilibrium gives rise to two possible cases depending on the advertising cost relative to the transportation cost. When the advertising cost is low, each firm targets only its natural market, ignoring the other. However, when the advertising cost is high, each firm targets both markets but in different proportions. Surprisingly, we find that, for large advertising costs, random advertising yields higher equilibrium profits than targeting, what contrasts with the previous studies on targeted advertising. The root of this difference is that, in our horizontal differentiation model, the move from mass to targeted advertising rises demand elasticity, a pro-competitive effect which was absent from the previous literature.17 As already discussed in Section 2, we have analyzed a nonsequential game where the firms simultaneously choose their prices and advertising intensities. We incidentally proved that the equilibrium of the simultaneous game is the same as the sequential game where prices are chosen prior to advertising strategies while, on the other hand, we do not see any clear evidence showing that, on the contrary, firms are able to commit to advertising intensities in order to soften subsequent price competition, as assumed in Roy (2000). The pervasive evidence of cross-advertising in real-world examples seems indeed more in accordance with our results than with the perfect segmentation ones following from sequential models where prices would be set after advertising levels.