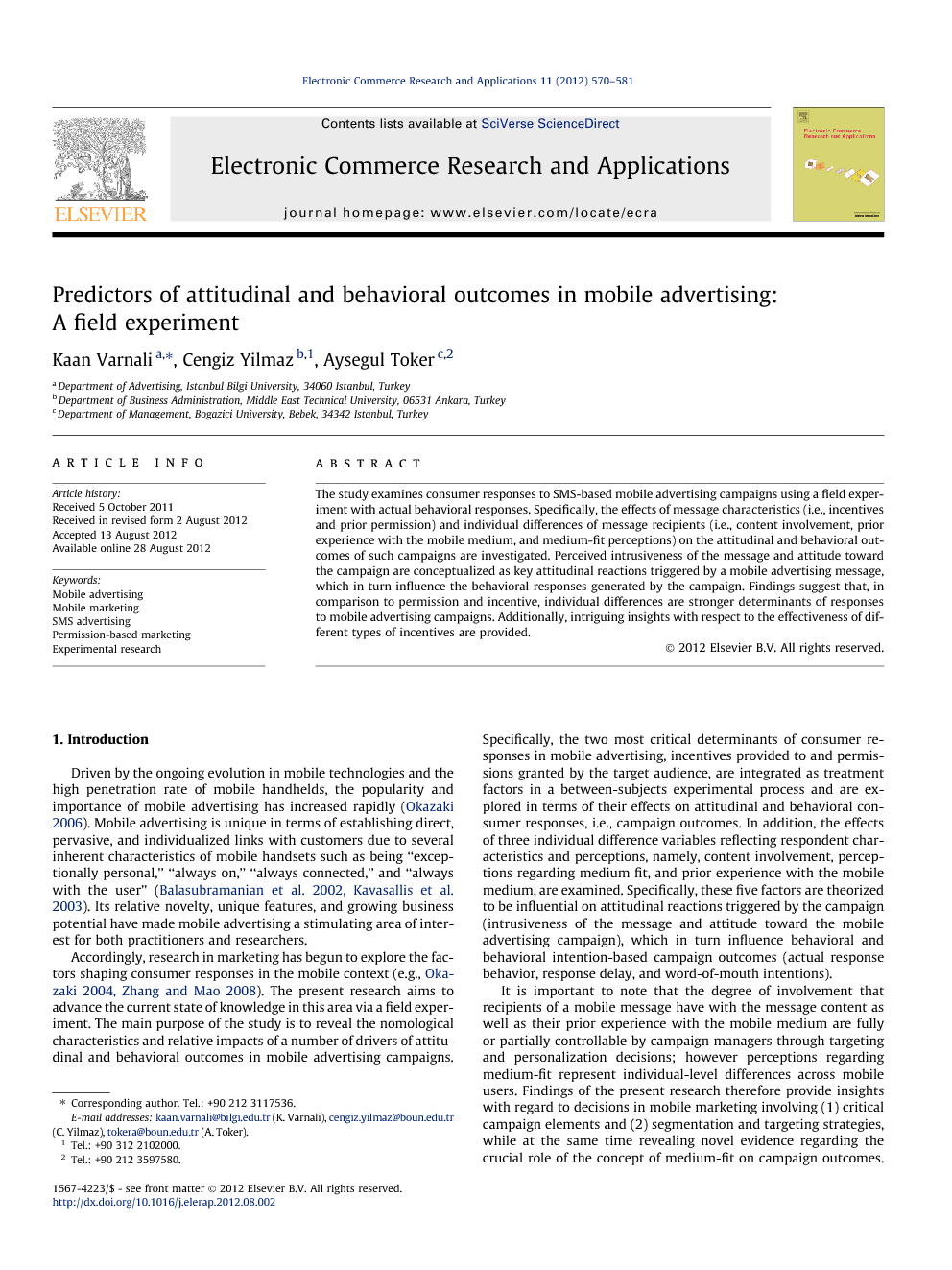 The study examines consumer responses to SMS-based mobile advertising campaigns using a field experiment with actual behavioral responses. Specifically, the effects of message characteristics (i.e., incentives and prior permission) and individual differences of message recipients (i.e., content involvement, prior experience with the mobile medium, and medium-fit perceptions) on the attitudinal and behavioral outcomes of such campaigns are investigated. Perceived intrusiveness of the message and attitude toward the campaign are conceptualized as key attitudinal reactions triggered by a mobile advertising message, which in turn influence the behavioral responses generated by the campaign. Findings suggest that, in comparison to permission and incentive, individual differences are stronger determinants of responses to mobile advertising campaigns. Additionally, intriguing insights with respect to the effectiveness of different types of incentives are provided.

Driven by the ongoing evolution in mobile technologies and the high penetration rate of mobile handhelds, the popularity and importance of mobile advertising has increased rapidly (Okazaki 2006). Mobile advertising is unique in terms of establishing direct, pervasive, and individualized links with customers due to several inherent characteristics of mobile handsets such as being “exceptionally personal,” “always on,” “always connected,” and “always with the user” (Balasubramanian et al., 2002 and Kavasallis et al., 2003). Its relative novelty, unique features, and growing business potential have made mobile advertising a stimulating area of interest for both practitioners and researchers. Accordingly, research in marketing has begun to explore the factors shaping consumer responses in the mobile context (e.g., Okazaki, 2004 and Zhang and Mao, 2008). The present research aims to advance the current state of knowledge in this area via a field experiment. The main purpose of the study is to reveal the nomological characteristics and relative impacts of a number of drivers of attitudinal and behavioral outcomes in mobile advertising campaigns. Specifically, the two most critical determinants of consumer responses in mobile advertising, incentives provided to and permissions granted by the target audience, are integrated as treatment factors in a between-subjects experimental process and are explored in terms of their effects on attitudinal and behavioral consumer responses, i.e., campaign outcomes. In addition, the effects of three individual difference variables reflecting respondent characteristics and perceptions, namely, content involvement, perceptions regarding medium fit, and prior experience with the mobile medium, are examined. Specifically, these five factors are theorized to be influential on attitudinal reactions triggered by the campaign (intrusiveness of the message and attitude toward the mobile advertising campaign), which in turn influence behavioral and behavioral intention-based campaign outcomes (actual response behavior, response delay, and word-of-mouth intentions).

The present research contributes to the understanding of central theoretical and pragmatic issues related to the applications of mobile advertising in consumer markets. Potential factors that explain consumers’ experience through an SMS-based mobile advertising campaign are identified, and the mechanism through which they influence attitudinal and behavioral campaign outcomes is explored. A distinctive aspect of the present study is that real response behaviors of the participants (both in terms of responsiveness and response delay) are studied in an experimental SMS messaging campaign. Results show that incentive and permission do influence behavioral and behavioral intention-based campaign outcomes. However, after controlling for individual differences, incentive still continues to influence response delay and WOM intentions, but its effects on actual responses turn nonsignificant. Likewise the effects of prior permission on response behaviors that were hitherto significant before the introduction of individual differences also become nonsignificant. A follow-up study further reveals that incentives presented in the form of small-definite wins are more powerful than large-probabilistic wins in terms of driving favorable campaign outcomes.