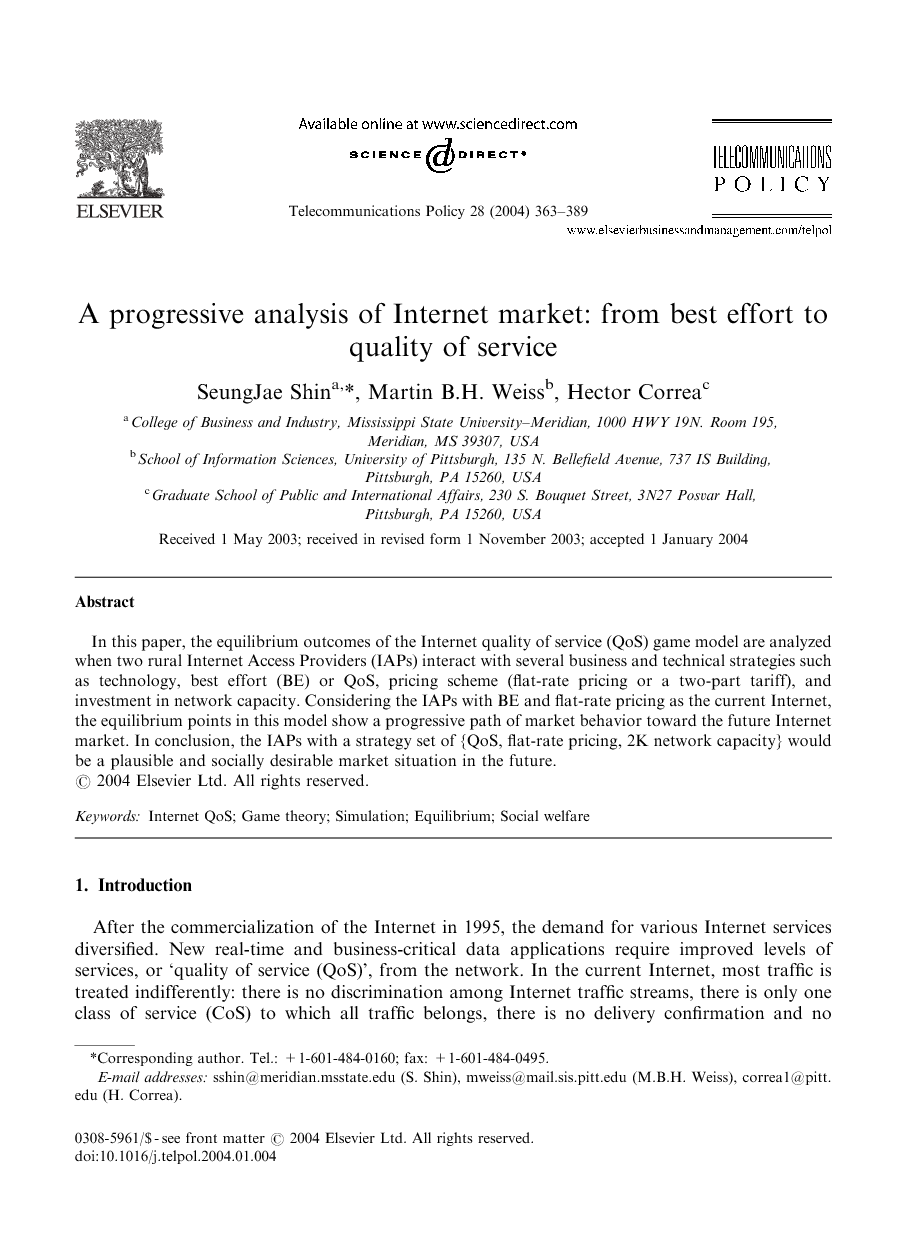 In this paper, the equilibrium outcomes of the Internet quality of service (QoS) game model are analyzed when two rural Internet Access Providers (IAPs) interact with several business and technical strategies such as technology, best effort (BE) or QoS, pricing scheme (flat-rate pricing or a two-part tariff), and investment in network capacity. Considering the IAPs with BE and flat-rate pricing as the current Internet, the equilibrium points in this model show a progressive path of market behavior toward the future Internet market. In conclusion, the IAPs with a strategy set of {QoS, flat-rate pricing, 2K network capacity} would be a plausible and socially desirable market situation in the future.

After the commercialization of the Internet in 1995, the demand for various Internet services diversified. New real-time and business-critical data applications require improved levels of services, or ‘quality of service (QoS)’, from the network. In the current Internet, most traffic is treated indifferently: there is no discrimination among Internet traffic streams, there is only one class of service (CoS) to which all traffic belongs, there is no delivery confirmation and no guarantee for timely delivery, and there is a possibility for traffic loss. This kind of Internet service is called ‘best effort (BE)’. Compared to BE with no service classification, QoS has various classes: a class for guaranteeing timely delivery, a class for no traffic loss, and a class for delivery confirmation. The relationship between BE and QoS is similar to that of regular mail and priority mail as the users pay a higher price for the priority service than the regular service (Black, 2000). However, guaranteeing QoS in the Internet is not easy. The main reason is that even though Internet Service Providers (ISPs)1 are using the common TCP/IP protocol, they are different in terms of backbone capacities, network architectures, routing protocols, business models, etc. Furthermore, there is no single entity to coordinate the whole Internet industry. Therefore, end-to-end QoS guarantee is impossible without the stronger coordination of multiple ISPs in the Internet industry, because any QoS assurances are only as good as the weakest link in the chain between the sender and the receiver. In the summer of 2001, large service providers like AT&T and WorldCom announced that they would provide Internet “CoS” to their customers. The Class of Service (CoS) consists of four classes according to priority level: platinum, gold, silver, and bronze. For example, voice or video applications can get the highest priority, while other traffic, such as E-mail or HTTP, can be given the lowest priority, which is the same class as the current Internet. Since QoS interconnection policies have yet to be established, this CoS capability is limited to traffic that is contained completely in the provider's own network. Table 1 describes the characteristic of each class. To address this limitation, BellSouth's Florida Multimedia Internet Exchange (FMIX) announced a plan in 2001 to be the first Network Access Point (NAP)2 to support QoS interconnection using Multi-Protocol Label Switching (MPLS).3 Some of the challenges (that were not in the announcement) lie in determining how class matching between providers will be achieved and disclosing the necessary network information for an end-to-end quality guarantee without compromising the competitive position of the interconnecting parties. Despite these difficulties, it is certain that, in the not-too-distant future, QoS will be introduced not only in private networks but also in the entire Internet. The backbone market leaders’ movement toward QoS and the emergence of QoS-enabled NAP are considered to be strong signs of this shift. Other features of this new network include: (1) Product diversification: Before QoS, there was only one available service level, i.e., BE, in which traffic delay and traffic dropping were possible. With QoS, there are two services in the Internet market: a BE service and a QoS service. Since the QoS service includes the BE service as its lowest CoS, the new markets will feature vertical product differentiation. (2) Operational transition: Traditionally, IAPs 4 in the US provided flat-rate access plans and later performed a limited amount of usage metering. Previous research ( MacKie-Mason & Varian, 1995) indicates that, in the absence of price-based differentiation, users will choose the highest quality level regardless of traffic type. Thus, it is reasonable to expect a change in pricing and billing practices toward usage-sensitive pricing with metering. The QoS Internet with these new features allows IAPs to have several options for their strategies besides network capacity. New strategies are chosen for their profit maximization, which is dependent on not only my own strategies but also the other's strategies. With the QoS Internet scenario, an Internet QoS Game model is built through which the IAPs market equilibrium behaviors are shown. The detailed model will be explained in Section 2.

The Internet has become an important social and business tool. The market is dynamic and will evolve from the current situation, although nobody knows the future of the Internet. The one thing known is that QoS will be introduced in the near future. By studying rural markets where the market structure is simpler, a reasonable economic model for QoS Internet is constructed. In this game model, the unique cost and revenue structure of the Internet access market has a significant influence on the equilibrium results, and the IAPs with a strategy set comprising {QoS, flat-rate pricing, 2K network capacity} would be a plausible and socially desirable market situation. Internet technology has been developed and this impacts on the Internet market. The current Internet has flourished in the last three decades on the basis of BE technology and flat-rate pricing but it also displays several problems in the areas of congestion, over-subscription, and interconnection. What will the future QoS Internet market be? The future IAPs might have more options in their strategic choices. Considering the analyses in this model, it may be possible to project that the future Internet might be as follows: (1) Both QoS–IAPs are expected to choose the same pricing scheme; both choose either the flat-rate pricing or the two-part tariff. (2) Network capacity is an important strategy to decide the market equilibrium in the future as well as currently. (3) A BE service will survive in the QoS Internet and will contribute a considerable portion to the IAPs’ revenue. Therefore, new technology (QoS) and larger capacity will pay off in the future Internet market. Even if you are not the first mover toward QoS, a second mover will pay off. The analysis in this paper is based on a rural area. Is it possible to apply this analysis to urban areas? There are more IAPs in urban areas and competition is fiercer than in rural areas. But what has been learned from this paper can also serve as a guideline for the urban Internet access market. A policy maker's goal for the Internet industry is sustainable growth and innovation. To achieve this goal, policy makers try to encourage competition and give incentives for ongoing investment and deployment of new technology, which will benefit to consumers in the Internet market. Comparing the social welfare of the six cases in the game model, when both IAPs choose a strategy set of {QoS, flat-rate, 2K}, social welfare is maximized. From the policy maker's point of view, QoS service gives more options, and larger network capacity gives an Internet access opportunity with a cheaper price for customers. These analyses show us that introducing a new technology does not always guarantee social welfare improvement. If the cost of new technology is larger than the benefit or if demand for the new technology is not sufficient to cover the cost, it would make social welfare worse than before. We can conclude that a government agency should encourage flat-rate pricing in the QoS Internet. For example, a flat-rate option for ISP customers could be required, as was the case in the U.S. telephone industry. Given the welfare improvement, a useful role of Internet policy makers is to induce the rural (and other) IAPs to move into the socially desirable equilibrium points in the future.