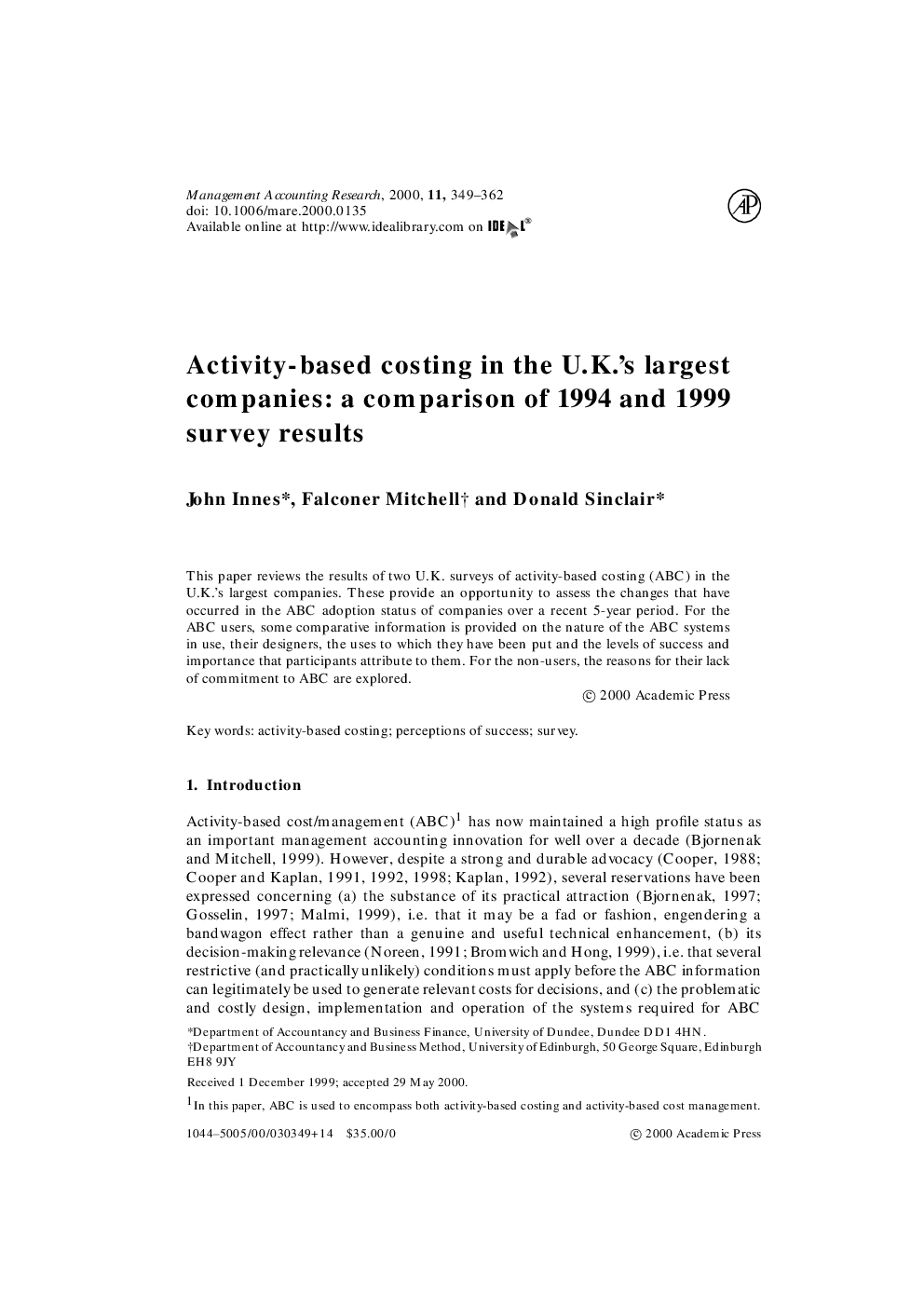 This paper reviews the results of two U.K. surveys of activity-based costing (ABC) in the U.K.’s largest companies. These provide an opportunity to assess the changes that have occurred in the ABC adoption status of companies over a recent 5-year period. For the ABC users, some comparative information is provided on the nature of the ABC systems in use, their designers, the uses to which they have been put and the levels of success and importance that participants attribute to them. For the non-users, the reasons for their lack of commitment to ABC are explored.

Activity-based cost/management (ABC)1 has now maintained a high proﬁle status as an important management accounting innovation for well over a decade (Bjornenak and Mitchell, 1999). However, despite a strong and durable advocacy (Cooper, 1988; Cooper and Kaplan, 1991, 1992, 1998; Kaplan, 1992), several reservations have been expressed concerning (a) the substance of its practical attraction (Bjornenak, 1997; Gosselin, 1997; Malmi, 1999), i.e. that it may be a fad or fashion, engendering a bandwagon effect rather than a genuine and useful technical enhancement, (b) its decision-making relevance (Noreen, 1991; Bromwich and Hong, 1999), i.e. that several restrictive (and practically unlikely) conditions must apply before the ABCinformation can legitimately be used to generate relevant costs for decisions, and (c) the problematic and costly design, implementation and operation of the systems required for ABC in an organizational context (Cobb et al., 1992; Malmi, 1997). These qualiﬁcations may contribute to an explanation of the relatively low adoption rates that have been consistently observed for ABC in surveys conducted in different countries (e.g. Lukka, 1994; Armitage and Nicholson, 1993; Ask and Ax, 1992), and imply that even practical experience of ABCmay not necessarily lead to its permanent adoption. However, most survey research to date has produced only snap-shot evidence of the extent of ABC adoption at one location and at one point in time. Survey replication in the same location has been uncommon and consequently little is known about how the adoption of ABC has actually progressed at a general level over time. This paper provides some empirical evidence of current general trends in the practical consideration, adoption and use of ABC. It is based on the results of two surveys of the U.K.’s largest companies undertaken in 1994 (Innes and Mitchell, 1995, 1997a,1999). These surveys are used to determine and assess the nature and signiﬁcance of changes during this period in ABC adoption rates and patterns of use.

The rate of ABC adoption (see Table 2) and the pattern of ABC use by adopters (see Tables 5 and 6) have shown fewstatistically signiﬁcant changes between 1994 and 1999. Adoption of ABC has also remained signiﬁcantly higher among larger companies and among those from the ﬁnance sector. However, the proportions of ABC users and of those currently assessing it have fallen, the percentage rejecting it has risen slightly, while a statistically signiﬁcant increase has been apparent in those currently giving no consideration to it. These results are indicative of no growth in the popularity of ABC, and are consistent with both a levelling off in interest in it and the adoption of it over this 5-year period.The survey results on ABC users provide some conﬂicting evidence on their experiences. Although 17.5% (n = 31) of respondents claimed to be using ABCin 1999, almost half of them (n = 14) used it in only a few applicable parts of their organization, and several others (n = 7) had merely used it in pilot studies. When respondents falling in either or both of these categories are excluded, only 7.9% (n = 14) are left as reasonably extensive and committed users of ABC. This represents a reduction on the comparable 1994 ﬁgure of 9.7%. In addition, some of these users (1999: n = 3; 1994: n = 14) retained their original costing system and used ABC in parallel with it. These results reveal, in a majority of cases, a somewhat tentative ABCimplementation, which is not suggestive of a strong positive experience with the technique. In contrast,it remains the case that virtually all of those making some use of ABC express very positive views on both its importance and success in general and speciﬁc applications within their organizations. Explanation of this apparent difference in user commitment to ABC is important in the assessment of ABC and the understanding of the nature and rate of its diffusion. It therefore merits further research.