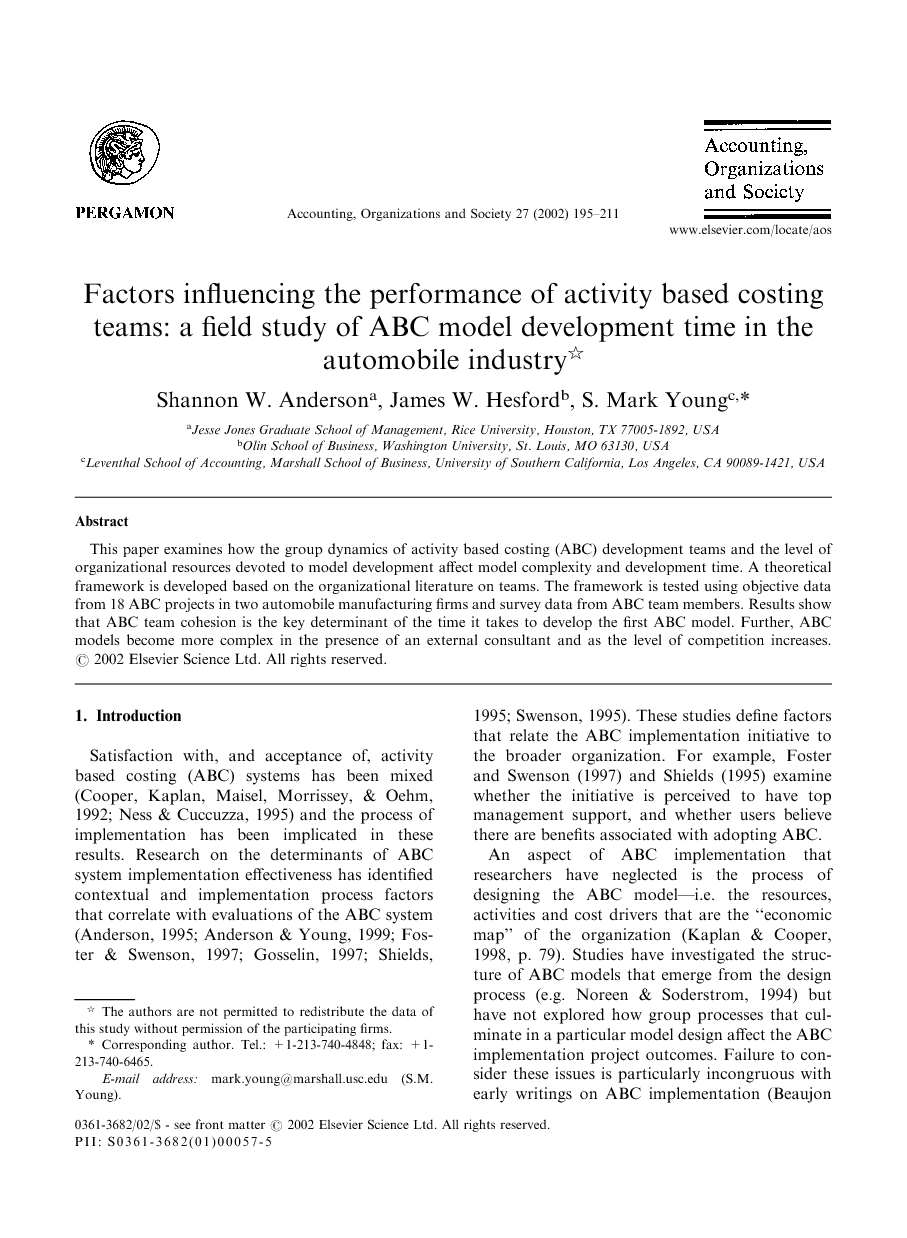 This paper examines how the group dynamics of activity based costing (ABC) development teams and the level of organizational resources devoted to model development affect model complexity and development time. A theoretical framework is developed based on the organizational literature on teams. The framework is tested using objective data from 18 ABC projects in two automobile manufacturing firms and survey data from ABC team members. Results show that ABC team cohesion is the key determinant of the time it takes to develop the first ABC model. Further, ABC models become more complex in the presence of an external consultant and as the level of competition increases.

Satisfaction with, and acceptance of, activity based costing (ABC) systems has been mixed (Cooper et al., 1992 and Ness and Cucuzza, 1995) and the process of implementation has been implicated in these results. Research on the determinants of ABC system implementation effectiveness has identified contextual and implementation process factors that correlate with evaluations of the ABC system (Anderson, 1995, Anderson and Young, 1999, Foster and Swenson, 1997, Gosselin, 1997, Shields, 1995 and Swenson, 1995). These studies define factors that relate the ABC implementation initiative to the broader organization. For example, Foster and Swenson (1997) and Shields (1995) examine whether the initiative is perceived to have top management support, and whether users believe there are benefits associated with adopting ABC. An aspect of ABC implementation that researchers have neglected is the process of designing the ABC model—i.e. the resources, activities and cost drivers that are the “economic map” of the organization (Kaplan & Cooper, 1998, p. 79). Studies have investigated the structure of ABC models that emerge from the design process (e.g. Noreen & Soderstrom, 1994) but have not explored how group processes that culminate in a particular model design affect the ABC implementation project outcomes. Failure to consider these issues is particularly incongruous with early writings on ABC implementation (Beaujon and Singhal, 1990, Cooper, 1990, Eiler and Campi, 1990, Haedicke and Feil, 1991 and Jones, 1991). These studies, and recent research on teams in the organizational literature (Cohen & Bailey, 1997), focused on the composition, training and group dynamics of the ABC development team. Since organizations have begun to rely on teams as a significant form of organizing work, gaining more insight about the inner workings of teams has assumed a high level of importance for researchers and practitioners. The objective of this paper is to provide more understanding about how the external environment, team processes and team dynamics affect ABC team performance. We develop the general framework from the literature. We use pre-study interviews to develop operational measures of key constructs and test the hypotheses derived from the framework using survey data from team members.1 Then we test the hypotheses using objective data about the ABC projects and survey data from ABC developers from 18 ABC teams in two US auto manufacturers (which we refer to as Company A and Company B).2 Our findings suggest that a key benefit of ABC training for team members is that it strongly influences the perceived significance of the task of developing the first ABC model, as does the perceived level of competition each plant faces. As perceptions of task significance and the ability to resolve team conflicts increase, so does the level of team cohesion. Three factors affect ABC model complexity: the presence of an external ABC consultant, the level of external competition and the ability to resolve team conflicts. Finally, while the degree of model complexity does not significantly affect the time to complete the model, a higher level of team cohesion leads to faster development of the first ABC model. The paper is organized into five sections. Section 2 reviews the organizational literature on development teams and the literature on ABC implementation to develop the theoretical framework of the study. Section 3 describes the research method, data collection and variable measurement. Section 4 presents the results of hypothesis testing. The implications of these findings are discussed in Section 5.

In this study we examine the ABC development process of 18 plants of two major automobile manufacturers in the US from the perspective of ABC development teams. From the theoretical framework, we tested six sets of relations among variables using PLS. The first set of relations linked the team input variables of team size, team heterogeneity and the presence of an external consultant to conflict resolution. We found a marginally significant relation between team and conflict resolution, but the direction of the effect was not as predicted—as team size increased, the ability to resolve conflicts increased. One explanation is that since many of the teams were relatively homogeneous, consisting of people from the finance staff, they all held similar views about the task and thus were able to resolve conflicts more expediently. We also expected a positive relation between having an external consultant as part of the team process and the level of conflict resolution. We found no support for this relation. We hypothesized, but found no support for, a relationship between competition and the amount of ABC training and team size. The lack of support for these hypotheses was surprising, however, it could be the case that resources were limited across Core and Non Core plants and thus, no difference was observed. We discovered that both the level of ABC training and the degree of competition affected task significance. In turn, task significance and the ability to resolve conflicts influenced team cohesion which ultimately was the major explanator of time to develop the first ABC model. We discuss this further later. The implications of these findings are that ABC training not only has the obvious benefit of providing technical knowledge, it also influences how team members see the ABC model development task. Competition plays a similar role in affecting perceptions of the significance of the task at hand. Two of the three factors we hypothesized would influence ABC model complexity were found to be significant. First, while we predicted a positive association between the presence of an ABC consultant and model complexity, we found that the presence of the consultant in Company B led to the creation of more complex models. This is probably a result of Company’s B strategy of being a low cost producer and a corresponding need for more detailed cost information made possible by a complex ABC model. We also found support for the relation between the degree of competition and model complexity. As teams experience greater competition the need to focus on developing accurate product costs increases.19 Greater accuracy in product costs is often achieved with more activity centers and cost drivers; in sum, more complexity. As mentioned earlier, the most significant predictor of time to develop the first ABC model is team cohesion. Team cohesion, and the commitment of the team to the task, are critical factors for local management to develop for ABC teams. While we also predicted that increased model complexity would increase time to develop the first ABC model, no relation was found. It could be the case that the time it takes to develop more complex models is relatively low once the initial model design is completed. Unraveling this set of relations is a task for future research. Previous discussions on ABC have suggested that ABC models can be successfully implemented by a team of heterogeneous, skilled employees, trained in cost system design and provided with adequate computing resources. In short, the focus has been on providing the right mix of inputs to a “black box” of cost system design. In this paper we have attempted to open the “black box”, shedding light on how inputs influence team dynamics which in turn are related to cost system design decisions and the speed of project completion.