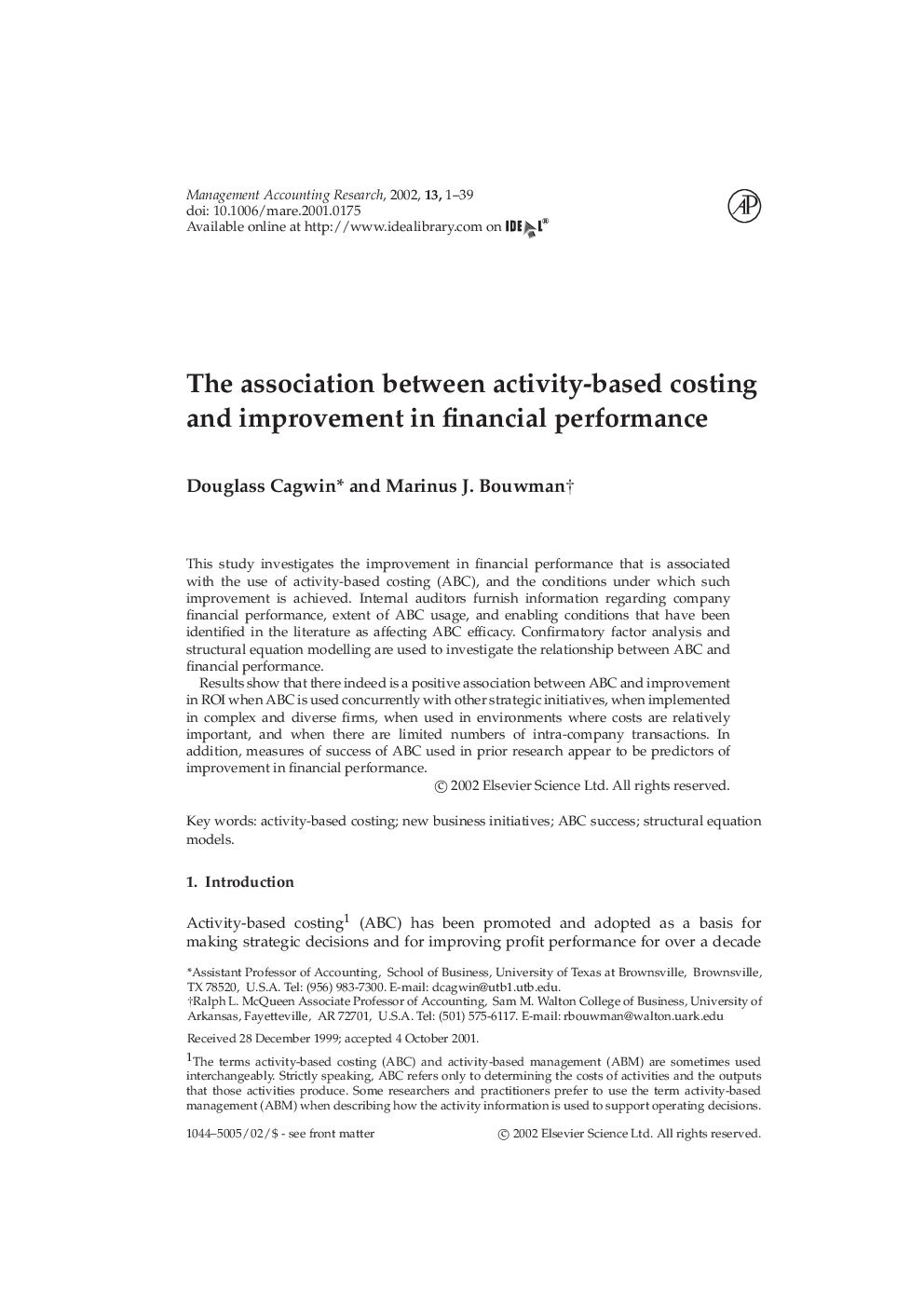 This study investigates the improvement in financial performance that is associated with the use of activity-based costing (ABC), and the conditions under which such improvement is achieved. Internal auditors furnish information regarding company financial performance, extent of ABC usage, and enabling conditions that have been identified in the literature as affecting ABC efficacy. Confirmatory factor analysis and structural equation modelling are used to investigate the relationship between ABC and financial performance. Results show that there indeed is a positive association between ABC and improvement in ROI when ABC is used concurrently with other strategic initiatives, when implemented in complex and diverse firms, when used in environments where costs are relatively important, and when there are limited numbers of intra-company transactions. In addition, measures of success of ABC used in prior research appear to be predictors of improvement in financial performance.

Activity-based costing1 (ABC) has been promoted and adopted as a basis for making strategic decisions and for improving proﬁt performance for over a decade. 1The terms activity-based costing (ABC) and activity-based management (ABM) are sometimes used interchangeably. Strictly speaking, ABC refers only to determining the costs of activities and the outputs that those activities produce. Some researchers and practitioners prefer to use the term activity-based management (ABM) when describing howthe activity information is used to support operating decisions. (Bjornenak and Mitchell, 1999). In addition, ABCinformation is nowalso widely used to assess continuous improvement and to monitor process performance. Although ABC has found rapid and wide acceptance, there is signiﬁcant diversity of opinions regarding the efﬁcacy of ABC (McGowan and Klammer, 1997). Several reservations have been expressed concerning its usefulness, relevance, and practicality (Innes et al., 2000). Despite managers’ insistence that management accounting systems pass the cost–beneﬁt test (Foster and Young, 1997), there still is no signiﬁcant body of empirical evidence to validate the alleged beneﬁts of ABC (Shim and Stagliano, 1997; McGowan and Klammer, 1997). Empirical research is needed to document the (ﬁnancial) consequences of ABC implementation (Kennedy and Bull, 2000; McGowan, 1998). Furthermore, previous research has suggested that the beneﬁts of ABC are more readily realized under enabling conditions such as sophisticated information technology, highly competitive environment, complex ﬁrm processes, relatively high importance of costs, and relatively low unused capacity and intra-company transactions. Variables representing these conditions are appropriately incorporated into a model testing the efﬁcacy of ABC.The purpose of this study is to measure the improvement in ﬁnancial performance that is associated with ABC use and the conditions under which such improvement is achieved. The research instrument is a cross-sectional mail survey of 1058 internal auditors, claimed to be knowledgeable and unbiased in the assessment of cost systems (Tanju and Helmi, 1991; Ray and Gupta, 1992). Conﬁrmatory factor analysis and structural equation modelling using LISREL8 (Joreskog and Sorbom, 1993) are used to test a model hypothesizing the conditions under which there is a positive association between time-impacted use of ABC and change in ﬁnancial performance. Control is provided for the moderating effects of concurrent use of other strategic management initiatives (e.g. TQM, JIT) and enabling conditions identiﬁed by prior research. In addition, the study tests the association between improvement in ﬁnancial performance and previously used measures of ABC efﬁcacy, as suggested by Foster and Swenson (1997). This study enhances previous research on ABC in three ways. One, it employs internal auditors who constitute an objective and knowledgeable source of ABC performance. Prior research has used respondents with a personal stake in ABC,such as controllers or ABC project managers (e.g. Shields, 1995; Swenson, 1995;Krumwiede, 1996, 1998). Second, this study tests a speciﬁc measure of improvement in ﬁnancial performance, as opposed to unobservable general constructs such asperceptions of ‘success,’ ‘satisfaction’, or ‘ﬁnancial beneﬁt’. Finally, it tests a structural model synthesized from prior theoretical research, describing the conditions under which ABC should be successful. Results showthat positive synergies are obtained fromconcurrent use of ABC with other initiatives. In addition, positive associations between ABC and improvement in ROI are reported when ABC is implemented in complex and diverse ﬁrms, in environments where costs are relatively important, and when there are limited numbers of intra-company transactions to constrain beneﬁts. There is also some indication that other enabling conditions (information technology sophistication, absence of excess capacity, and a competitive environment) affect the efﬁcacy of ABC as expected, and that manufacturing ﬁrms may obtain greater beneﬁts than non-manufacturing ﬁrms. Finally, there is some evidence that previously used measures of ABC success (Shields, 1995; Swenson, 1995; Krumwiede, 1996, 1998) are predictors of improvement in ﬁnancial performance. The remainder of the paper is organized as follows. The next section relates background regarding ABC and situates this study in the context of prior research.Subsequent sections develop hypotheses, describe research methodology including model speciﬁcation, discuss data collection procedures, and present the results.

An important contribution of this study is the synthesis of a model explaining the condition under which ABC is associated with improvement in a composite measure of ﬁnancial performance, ROI. The model is synthesized from the ﬁndings and arguments of previous research, with constructs validated with conﬁrmatory factor analysis. The model is then tested with structural equation modelling (SEM). Prior to this research there has been no comprehensive explanation of the ﬁrm-speciﬁc conditions under which ABC is associated with positive performance results. Positive synergies are obtained from concurrent use of other strategic business initiatives with ABC. When ABC is used concurrently with JIT, TQM, etc., ﬁrms have a net improvement in ﬁnancial performance greater than that obtained from use of those strategic business initiatives without ABC. This ﬁnding is consistent with statements by researchers that management accounting systems are meant to be efﬁcient in supporting ﬁrms’ operational effectiveness (Granlund and Lukka, 1998;Cooper, 1996; Porter, 1996; Granlund, 1997). A primary purpose of initiatives is to improve this effectiveness and there is nowevidence that ABC is contributing in this regard. Evidence that the sum of the beneﬁts is greater than the costs incurred has been argued but not demonstrated. This research identiﬁed an overall positive synergistic effect fromconcurrent use of initiatives, but did not address which speciﬁc initiatives provide the effect or whether there may be a causal ordering of initiatives that is important. Further research is needed to investigate question such as (1) which combinations of initiatives provide a positive effect when used concurrently with ABC? and (2) is there a speciﬁc ordering of implementation (e.g. JIT before ABC) that provides maximumbeneﬁt? A second important ﬁnding provided evidence supporting previous analytical and theoretical research regarding the conditions favourable to obtaining beneﬁts from ABC. There is a positive association between ABC and improvement in ROI when implemented in complex and diverse ﬁrms, in environments where costs are relatively important, and when there are limited numbers of intra-company transactions to constrain beneﬁts. These positive ﬁndings regarding ABC are of particular interest to practicing and academic accountants because they are often the primary proponents and administrators of ABC. ABC contributes positive beneﬁt, but not in all ﬁrm-speciﬁc circumstances. It is important that the practitioner community have knowledge of the appropriate conditions for maximizing the efﬁcacy of ABC.There also is an indication that other enabling conditions (information technology sophistication, absence of excess capacity, and a competitive environment) affect the efﬁcacy of ABC. The signs of the coefﬁcients of these non-signiﬁcant enabling variables are as expected, leading one to suspect that statistical power might have been an issue. Although it is difﬁcult to obtain both large sample sizes and the volume of information necessary to adequately measure the constructs of interest, the subject is of signiﬁcant importance to pursue. Further research is also required to explain the increased efﬁcacy of ABC in smaller business units. There is also evidence that previously used measures of ABC success, satisfaction with ABC, and ﬁnancial beneﬁt obtained from ABC (Shields, 1995; Swenson, 1995; Krumwiede, 1996, 1998) are predictors of improvement in ﬁnancial performance. This ﬁnding is an important step toward completing the link between identiﬁcation of the conditions affecting the success of ABC implementation, to documentation of ABC’s efﬁcacy as a proﬁt-enhancing tool. Finally, no cross-sectional study can deﬁnitively determine causality. Future researchers could perform longitudinal studies that investigate the improvement in performance within ﬁrms before and after the implementation of ABC. Care must be taken to control for the ﬁrm-speciﬁc conditions identiﬁed as important in this study.