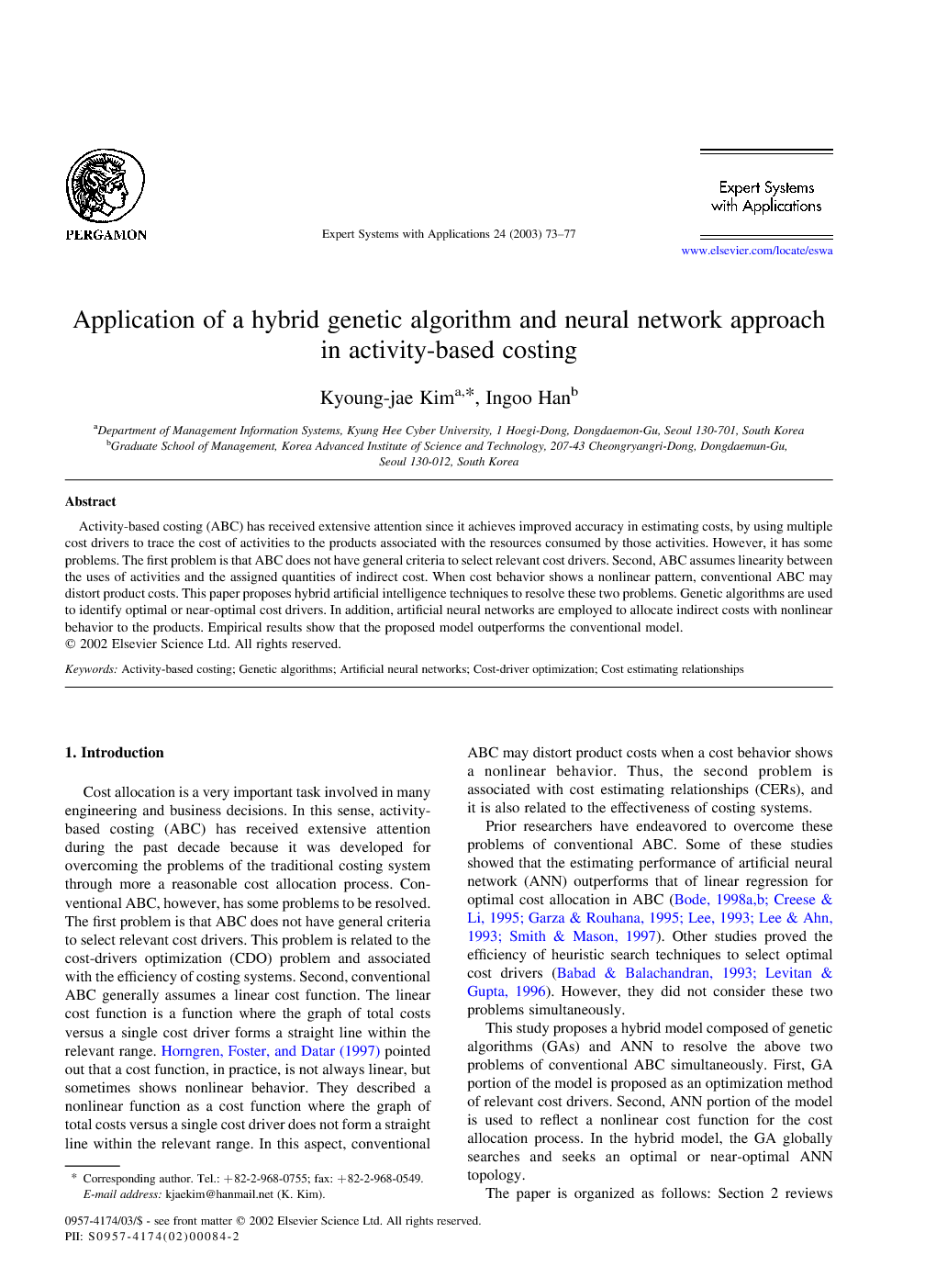 Activity-based costing (ABC) has received extensive attention since it achieves improved accuracy in estimating costs, by using multiple cost drivers to trace the cost of activities to the products associated with the resources consumed by those activities. However, it has some problems. The first problem is that ABC does not have general criteria to select relevant cost drivers. Second, ABC assumes linearity between the uses of activities and the assigned quantities of indirect cost. When cost behavior shows a nonlinear pattern, conventional ABC may distort product costs. This paper proposes hybrid artificial intelligence techniques to resolve these two problems. Genetic algorithms are used to identify optimal or near-optimal cost drivers. In addition, artificial neural networks are employed to allocate indirect costs with nonlinear behavior to the products. Empirical results show that the proposed model outperforms the conventional model.

Cost allocation is a very important task involved in many engineering and business decisions. In this sense, activity-based costing (ABC) has received extensive attention during the past decade because it was developed for overcoming the problems of the traditional costing system through more a reasonable cost allocation process. Conventional ABC, however, has some problems to be resolved. The first problem is that ABC does not have general criteria to select relevant cost drivers. This problem is related to the cost-drivers optimization (CDO) problem and associated with the efficiency of costing systems. Second, conventional ABC generally assumes a linear cost function. The linear cost function is a function where the graph of total costs versus a single cost driver forms a straight line within the relevant range. Horngren, Foster, and Datar (1997) pointed out that a cost function, in practice, is not always linear, but sometimes shows nonlinear behavior. They described a nonlinear function as a cost function where the graph of total costs versus a single cost driver does not form a straight line within the relevant range. In this aspect, conventional ABC may distort product costs when a cost behavior shows a nonlinear behavior. Thus, the second problem is associated with cost estimating relationships (CERs), and it is also related to the effectiveness of costing systems. Prior researchers have endeavored to overcome these problems of conventional ABC. Some of these studies showed that the estimating performance of artificial neural network (ANN) outperforms that of linear regression for optimal cost allocation in ABC (Bode, 1998a, Bode, 1998b, Creese and Li, 1995, Garza and Rouhana, 1995, Lee, 1993, Lee and Ahn, 1993 and Smith and Mason, 1997). Other studies proved the efficiency of heuristic search techniques to select optimal cost drivers (Babad and Balachandran, 1993 and Levitan and Gupta, 1996). However, they did not consider these two problems simultaneously. This study proposes a hybrid model composed of genetic algorithms (GAs) and ANN to resolve the above two problems of conventional ABC simultaneously. First, GA portion of the model is proposed as an optimization method of relevant cost drivers. Second, ANN portion of the model is used to reflect a nonlinear cost function for the cost allocation process. In the hybrid model, the GA globally searches and seeks an optimal or near-optimal ANN topology. The paper is organized as follows: Section 2 reviews related prior studies. Section 3 presents a description of our hybrid model of GA and ANN. In addition, 4 and 5 describe the process of experiments and experimental results. Finally, Section 6 discusses the conclusions and the limitations of the study and future research issues.

This study has proposed the hybrid AI model to resolve the problems of designing ABC systems. In this study, the GA was used for the step of selecting relevant cost drivers and optimizing the network topology of ANN. The GA globally searched an optimal or near-optimal ANN topology in the hybrid model. The proposed model outperformed the conventional model. From the experimental results, we concluded that the proposed model has advantages when the model analyzes the data with complex and nonlinear CER. The major advantage of the proposed model was simultaneous consideration of efficiency and effectiveness issues for designing ABC systems. However, this study had some limitations. In this study, a simulated data based on a real-world case was used for testing the proposed model. This study cautiously managed the simulation process, but the results on simulated data might not guarantee consistency in the real world. Thus, it is necessary to test the proposed model with the real-world data. In addition, while ANN performed well with the GA-based optimization, other learning algorithms might also prove effective in place of ANN. We believe that there is great potential for further research with the optimization using the GA for other AI techniques including case-based reasoning and support vector machines. For future work, we intend to apply the proposed model to more complicated areas in accounting including cost estimation, cost allocation to specific departments, and the mitigation of the linear assumption in cost-volume-profit (CVP) analysis.