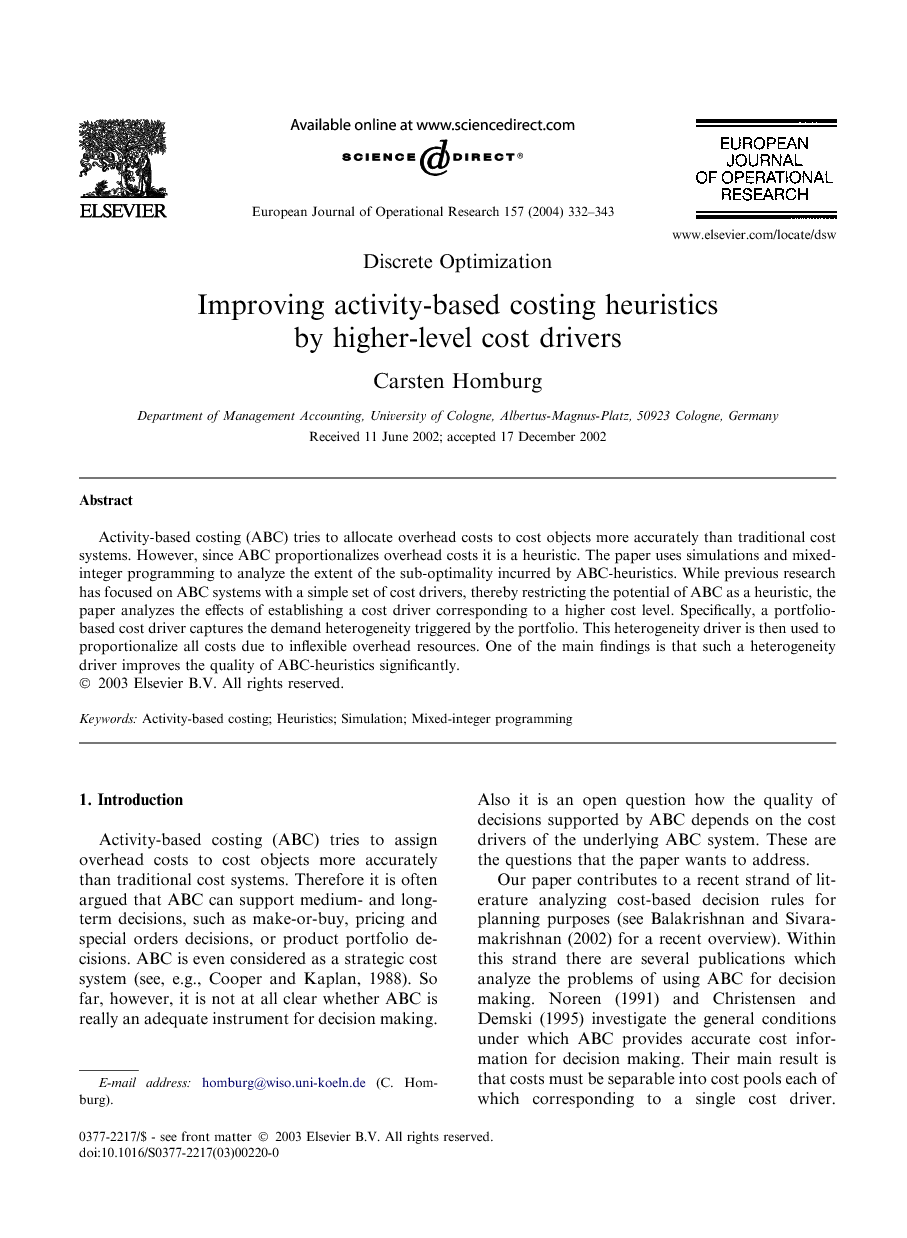 Activity-based costing (ABC) tries to allocate overhead costs to cost objects more accurately than traditional cost systems. However, since ABC proportionalizes overhead costs it is a heuristic. The paper uses simulations and mixed-integer programming to analyze the extent of the sub-optimality incurred by ABC-heuristics. While previous research has focused on ABC systems with a simple set of cost drivers, thereby restricting the potential of ABC as a heuristic, the paper analyzes the effects of establishing a cost driver corresponding to a higher cost level. Specifically, a portfolio-based cost driver captures the demand heterogeneity triggered by the portfolio. This heterogeneity driver is then used to proportionalize all costs due to inflexible overhead resources. One of the main findings is that such a heterogeneity driver improves the quality of ABC-heuristics significantly.

The investigation focused on analyzing the performance of ABC for determining the portfolio when overhead resources are not perfectly flexible. A mixed-integer program reflected the inflexibility of overhead resources precisely and provided an adequate benchmark throughout the investigation. It turned out that the severe linearity assumption of ABC can result in a significant optimality gap. This gap increases with a decreasing flexibility of the involved overhead resources. These results are in line with previous investigations on ABC performance. However, in evaluating ABC as a heuristic to make portfolio decisions previous research has not used all the opportunities provided by the ABC framework. Rather, ABC was reduced to a simple cost system though it is one of the major points of ABC to use complex cost drivers as well. Hence, the primary finding of the investigation is that implementing higher-level cost drivers might improve the quality of ABC as a heuristic considerably. The reason for this is that higher-level cost drivers are able to adequately reflect interdependences by a linear approximation. In particular only higher-level cost drivers allow to adjust an ABC decision rule to a change in the flexibility of overhead resources. In contrast, within simple ABC major interdependences are neglected completely, often resulting in an inacceptable optimality gap. Of course, generalizing the results of the investigation is an issue. The simulations are based on simplified scenarios which will not precisely reflect the situation of a real-world firm determining its portfolio. None the less, the results provide some insight as to the quality of ABC for decision making. In particular, extensive sensitivity analyses indicate that it is important to account for higher-level cost drivers whenever the resource flexibility becomes an issue. Before using simple ABC a manager should therefore have a clear understanding of the importance of capacity adjustments for the problem at hand. In practice, proportionalizing overhead costs is not the only approximation ABC is making use of. For instance, the number of cost drivers of an ABC-system plays an important role (see, e.g., Babad and Balachandran, 1993; Schniederjans and Garvin, 1997). An ABC-system of low complexity, such as a system with a small number of cost drivers, is not only easier to handle but also easier to understand by management (see, e.g., Merchant and Shields, 1993). Therefore, in many practical situations the cost drivers do not yield an accurate explanation of the utilization of overhead resources. However, these approximations were out of the scope of the paper. The focus was on the sub-optimality resulting when the proportionalization of overhead costs is the only approximation underlying the ABC system. It seems to be an interesting next step to analyze how ABC decision rules perform when several approximations apply.