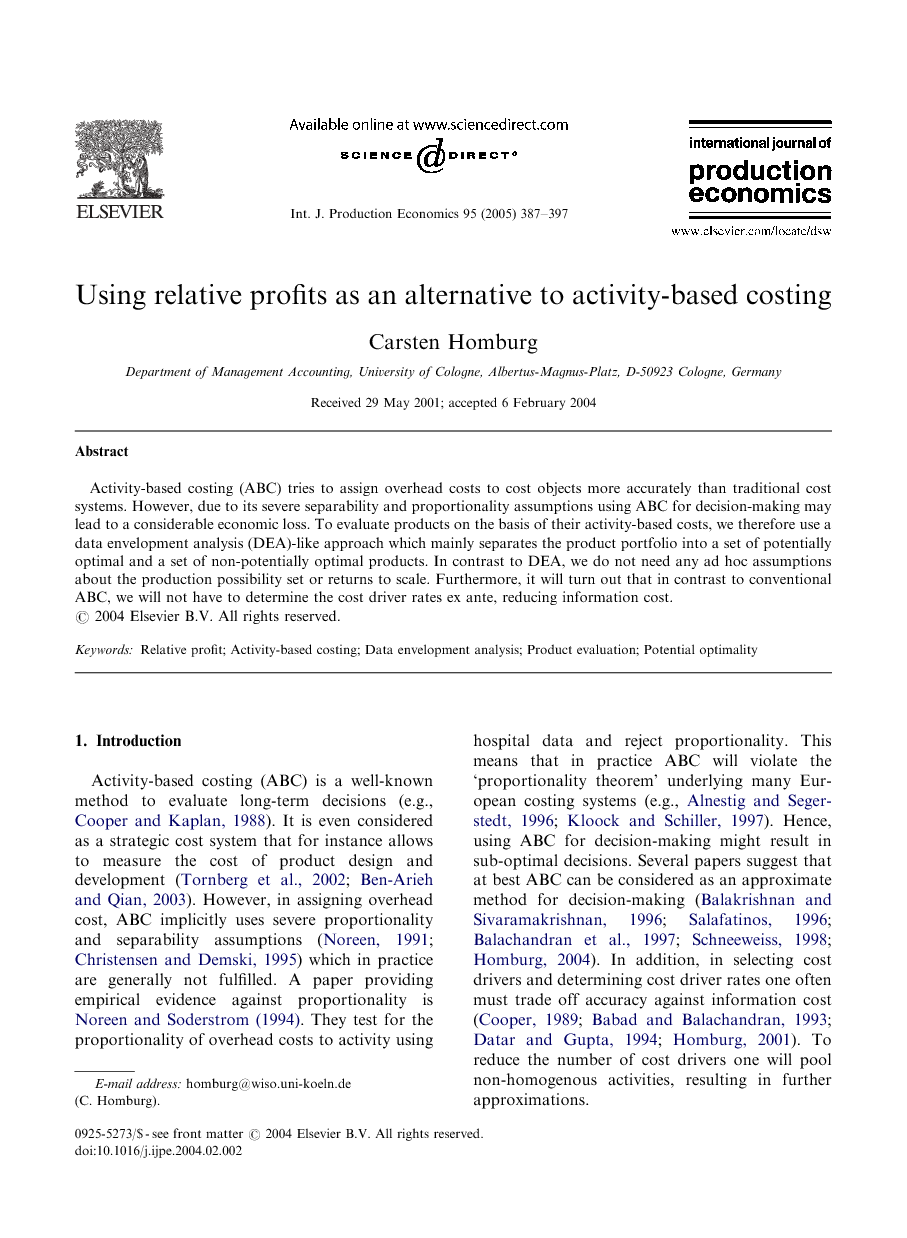 Activity-based costing (ABC) tries to assign overhead costs to cost objects more accurately than traditional cost systems. However, due to its severe separability and proportionality assumptions using ABC for decision-making may lead to a considerable economic loss. To evaluate products on the basis of their activity-based costs, we therefore use a data envelopment analysis (DEA)-like approach which mainly separates the product portfolio into a set of potentially optimal and a set of non-potentially optimal products. In contrast to DEA, we do not need any ad hoc assumptions about the production possibility set or returns to scale. Furthermore, it will turn out that in contrast to conventional ABC, we will not have to determine the cost driver rates ex ante, reducing information cost.

There is a controversial discussion about the pros and cons of ABC. While the supporters of ABC claim that it is a strategic cost system, it is also argued that the separability and proportionality assumptions of ABC lead to biased cost values. Information costs of ABC are considered to be problematic as well. In particular it is costly to obtain consumption rates for cost drivers and resources. Accurate cost driver consumption rates are, however, a prerequisite for conventional ABC to generate relevant cost information. In this paper we established an alternative to evaluating products on the basis of conventional ABC. The main idea is to give up finding cost driver consumption rates and—as a consequence—to give up determining sharp cost driver rates. Instead relative profits were calculated by using concepts of multi-criteria decision-making. To this end sharp cost driver rates for all products are replaced by product-specific rates. This means that the degree of freedom in the model parameters is considerably augmented. Each product is evaluated on a product-specific cost basis which lets a product appear in the best possible light. This amount of freedom results in weak strategic signals with lower information costs. It turned out that in using product-specific cost driver rates one should account for obvious cost information. Therefore, the managers’ knowledge is a necessary input for the model to yield suitable scores. In addition, relative profits should not be the only criterion to evaluate products. They only provide one-dimensional signals and changing the product portfolio is a strategic decision involving many aspects. However, having in mind strategic decision-making our method might be more appropriate than conventional ABC where sharp cost numbers suggest an accuracy which is unreachable in practice.