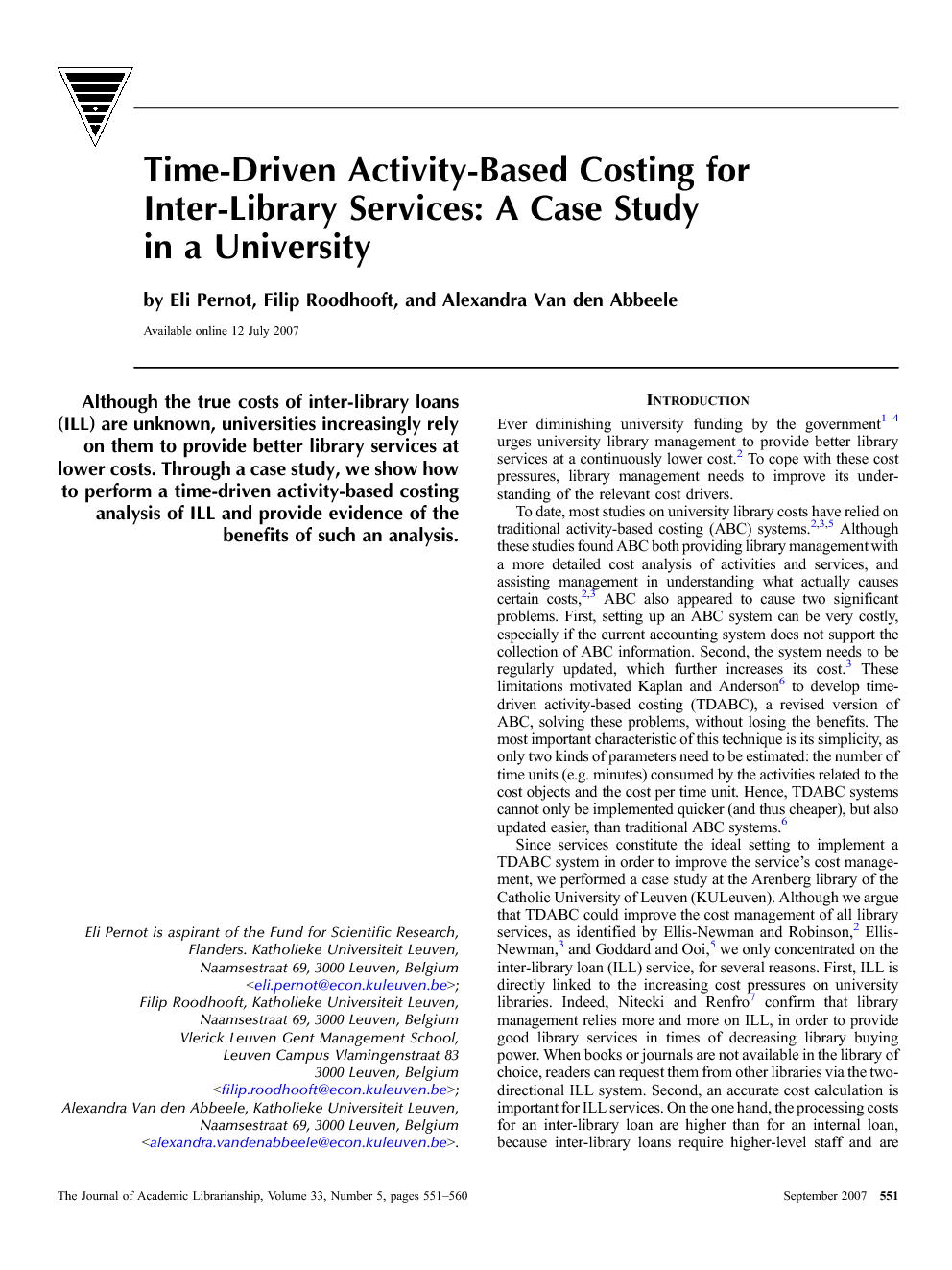 Although the true costs of inter-library loans (ILL) are unknown, universities increasingly rely on them to provide better library services at lower costs. Through a case study, we show how to perform a time-driven activity-based costing analysis of ILL and provide evidence of the benefits of such an analysis.

In this paper, we have set up a time-driven activity-based costing (TDABC) system for the inter-library loan (ILL) service of the KULeuven Arenberg library. Based on cost tables III and IV, borrowing costs appear to range from €4.23 (for the simplest article delivery) to €14.79 (for the most complex book loan), while incoming request costs range from €2.12 (for the simplest article delivery) to €8.93 (for the most complex article delivery). These results are comparable with the cost rates found by the most recent ILL cost study of the Association of Research Libraries:14,15 borrowing unit costs for user-initiated ILL ranging from $2.39 to $14.7 and user-initiated lending unit costs ranging from $3.27 to $12.06. Yet, they are slightly smaller than average costs (€12.56 for borrowing and €7.24 for lending) found in the Nordic13 and significantly lower than the total average per unit cost of $41.20, found at the NIST Library.19 At the same time, however, the KULeuven library's ILL costs appear several times bigger than the circulation cost around 1 dollar at OhioLINK17 or Prospector.18 Nevertheless, the most significant benefit of our TDABC analysis lies in the ability to disaggregate per-transaction costs, based on a thorough activity analysis that in the end visualizes the true cost of different activities for different ILL requests. That way, the analysis also (and perhaps most importantly) allows managerial recommendations concerning amelioration opportunities. For example, since TDABC makes it possible to distinguish the scanning of PDF files as a resource intensive activity, the library manager can use this information to consider the investment in a professional scanner. Furthermore, the TDABC analysis shows that “searching” and “providing feedback” consume a large amount of resources. Based on these findings, potential ameliorations can be investigated, such as outsourcing the search activity to the user and improving the feedback process by means of a FAQ portal. Hence, our case study not only shows how the time-driven cost accounting technique works in practice, by means of clear time equations, cost tables, and several recommendations, but also exemplifies the additional benefit of disaggregated time-driven activity-based costs compared to traditional ILL cost studies. Therefore, we argue that this cost accounting technique is very suited to cope with the increasing cost pressures that university libraries currently experience, in particular related to ILL services. Hence, this paper bridges the library and cost accounting literatures. First and most importantly, our study contributes to the library literature by offering an innovative technique to either reduce ILL resource costs or renegotiate ILL service prices. Based on the case study evidence of the Arenberg library, we conclude that TDABC can contribute to the provision of better library services at lower costs. Yet, our paper also contributes to the cost accounting literature by testing the usefulness of a new revised ABC technique in practice. In that respect, our study is one of the first to offer clear evidence that TDABC does accomplish the postulated benefits, when performed in practice. Finally, we want to emphasize some interesting future research opportunities on this topic. Obviously, the results of our case study would be more informative when compared to a reference. Therefore, it would be interesting to perform a similar case study of TDABC for ILL in another (university) library. Based on the resulting data, a benchmark study could offer interesting additional information to lower the costs or to increase the quality of the ILL service. Moreover, it looks very promising to apply the TDABC approach to other library services. In that respect, the Arenberg library manager suggested performing a TDABC analysis on the activity “acquisition”, which has similar characteristics (complex, time consuming and lots of variation) suggesting a high TDABC usefulness.