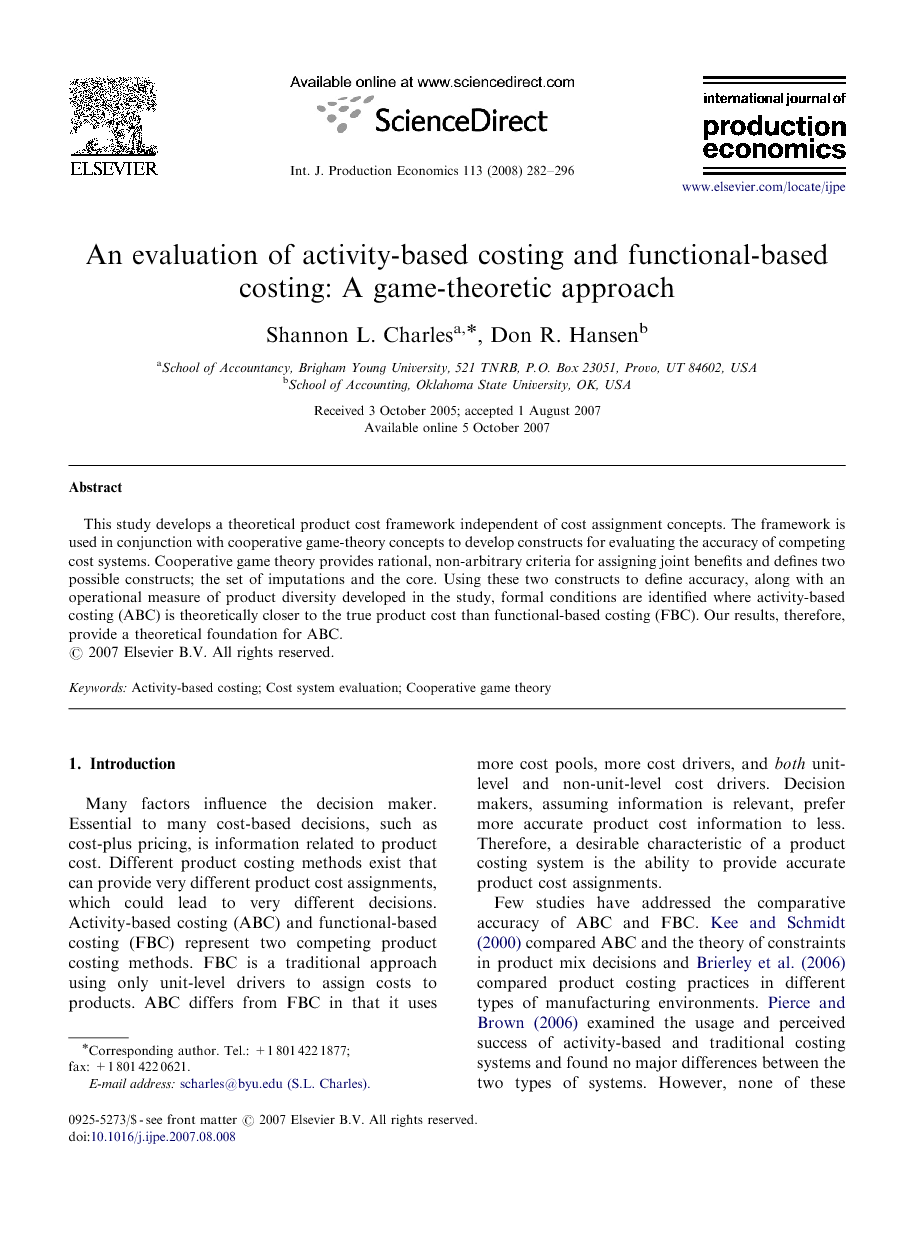 This study develops a theoretical product cost framework independent of cost assignment concepts. The framework is used in conjunction with cooperative game-theory concepts to develop constructs for evaluating the accuracy of competing cost systems. Cooperative game theory provides rational, non-arbitrary criteria for assigning joint benefits and defines two possible constructs; the set of imputations and the core. Using these two constructs to define accuracy, along with an operational measure of product diversity developed in the study, formal conditions are identified where activity-based costing (ABC) is theoretically closer to the true product cost than functional-based costing (FBC). Our results, therefore, provide a theoretical foundation for ABC.

Accurate product-cost information is critical for decision makers. To facilitate an evaluation of the accuracy of competing cost assignments, a theoretical product-cost framework was developed independent of cost assignment concepts. This framework represents an infinite set of cost systems, of which the true product cost is expected to be a member. Cooperative game theory provides reasonable restrictions that can be placed on the infinite set of cost systems to reduce the set and provide a definition of accuracy that can be used to evaluate existing cost systems. Two possible constructs offered by cooperative game theory include the set of imputations and the core. An analytical evaluation of ABC and FBC based on these constructs revealed that ABC assignments are always imputations and members of the core and thus, always qualify as potential true product-cost assignments. The analysis further reveals that FBC assignments do not always conform to these criteria. A threshold value of product diversity, PDi, identifies when FBC fails to satisfy the conditions defined by the set of imputations and the core, and therefore, PDi also indicates when ABC is theoretically more accurate than FBC when sufficient product diversity exists. Our results show that, under certain conditions, ABC qualifies as a more accurate product-costing system than FBC. Decision makers rely on information provided by a cost system to make cost-based decisions such as pricing, product mix and make or buy decisions. Therefore, using more accurate product-cost information may impact decision quality, where more accurate information may lead to an increase in the quality of decisions. In addition, the identification of an aggregate ABC assignment ratio, View the MathML sourceεi¯, and PDi in this study has significant implications for research and practice in the area of product costing. For example, the aggregate ABC assignment ratio reduces the apparent complexity of ABC and may provide other practical implications related to implementation decisions or the design of future cost systems. PDi provides researchers with the ability to quantify the source of difference between ABC, FBC, or any other cost systems. PDi also represents a tool that can be used in the future to empirically test for an association between product diversity and cost system choice.