عنوان انگلیسی
The influence of change agents' behavioral intention on the usage of the activity based costing/management system and firm performance: The perspective of unified theory of acceptance and use of technology
دانلود فوری مقاله + سفارش ترجمه 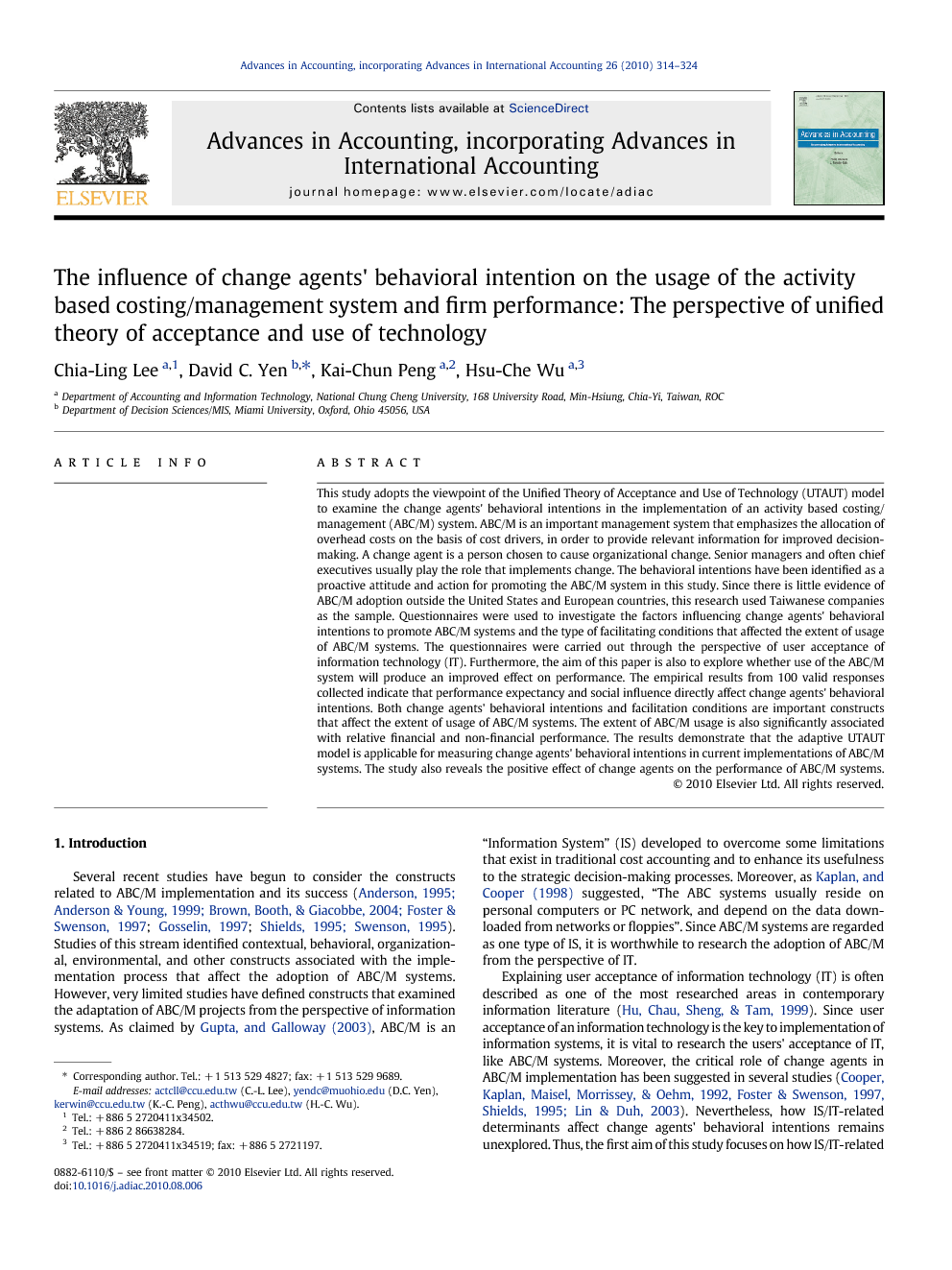 Several recent studies have begun to consider the constructs related to ABC/M implementation and its success (Anderson, 1995, Anderson & Young, 1999, Brown et al., 2004 and Foster & Swenson, 1997; Gosselin, 1997; Shields, 1995 and Swenson, 1995). Studies of this stream identified contextual, behavioral, organizational, environmental, and other constructs associated with the implementation process that affect the adoption of ABC/M systems. However, very limited studies have defined constructs that examined the adaptation of ABC/M projects from the perspective of information systems. As claimed by Gupta, and Galloway (2003), ABC/M is an “Information System” (IS) developed to overcome some limitations that exist in traditional cost accounting and to enhance its usefulness to the strategic decision-making processes. Moreover, as Kaplan, and Cooper (1998) suggested, “The ABC systems usually reside on personal computers or PC network, and depend on the data downloaded from networks or floppies”. Since ABC/M systems are regarded as one type of IS, it is worthwhile to research the adoption of ABC/M from the perspective of IT. Explaining user acceptance of information technology (IT) is often described as one of the most researched areas in contemporary information literature (Hu, Chau, Sheng, & Tam, 1999). Since user acceptance of an information technology is the key to implementation of information systems, it is vital to research the users' acceptance of IT, like ABC/M systems. Moreover, the critical role of change agents in ABC/M implementation has been suggested in several studies (Cooper et al., 1992, Foster & Swenson, 1997, Shields, 1995 and Lin & Duh, 2003). Nevertheless, how IS/IT-related determinants affect change agents' behavioral intentions remains unexplored. Thus, the first aim of this study focuses on how IS/IT-related determinants affect change agents' behavioral intentions for ABC/M systems. Kennedy, and Affleck-Graves (2001) demonstrated that ABC/M could improve financial performance by using a binary variable to differentiate the firms that were adopting ABC/M. Nonetheless, prior studies suggested that the implementation of ABC/M should be measured by employing the extent of usage of ABC/M instead of utilizing a binary variable (Gosselin, 1997, Cagwin & Bouwman, 2002 and Baird et al., 2004). To avoid the problem that survey respondents may misinterpret the definition of ABC/M implementation, Cagwin, and Bouwman (2002) argued that there would exist a positive relationship between “the extent of usage of ABC/M” and “relative improvement in financial performance.” Still, limited empirical research has proved that the extent of usage of ABC/M can benefit firms. Therefore, the second aim of this study is to investigate how change agents' behavioral intentions to promote ABC/M influences the extent of usage of ABC/M, and the relationship between the extent of usage of ABC/M systems and relative performance improvement. This paper contributes to existing literature on the adoption of ABC/M in two ways. First, the contribution of this research is to propose a theoretic framework for management accounting innovations from the perspective of IT acceptance. Second, this study points out the importance of IS/IT-related constructs and the relative performance improvement associated with the adoption and implementation of ABC/M.