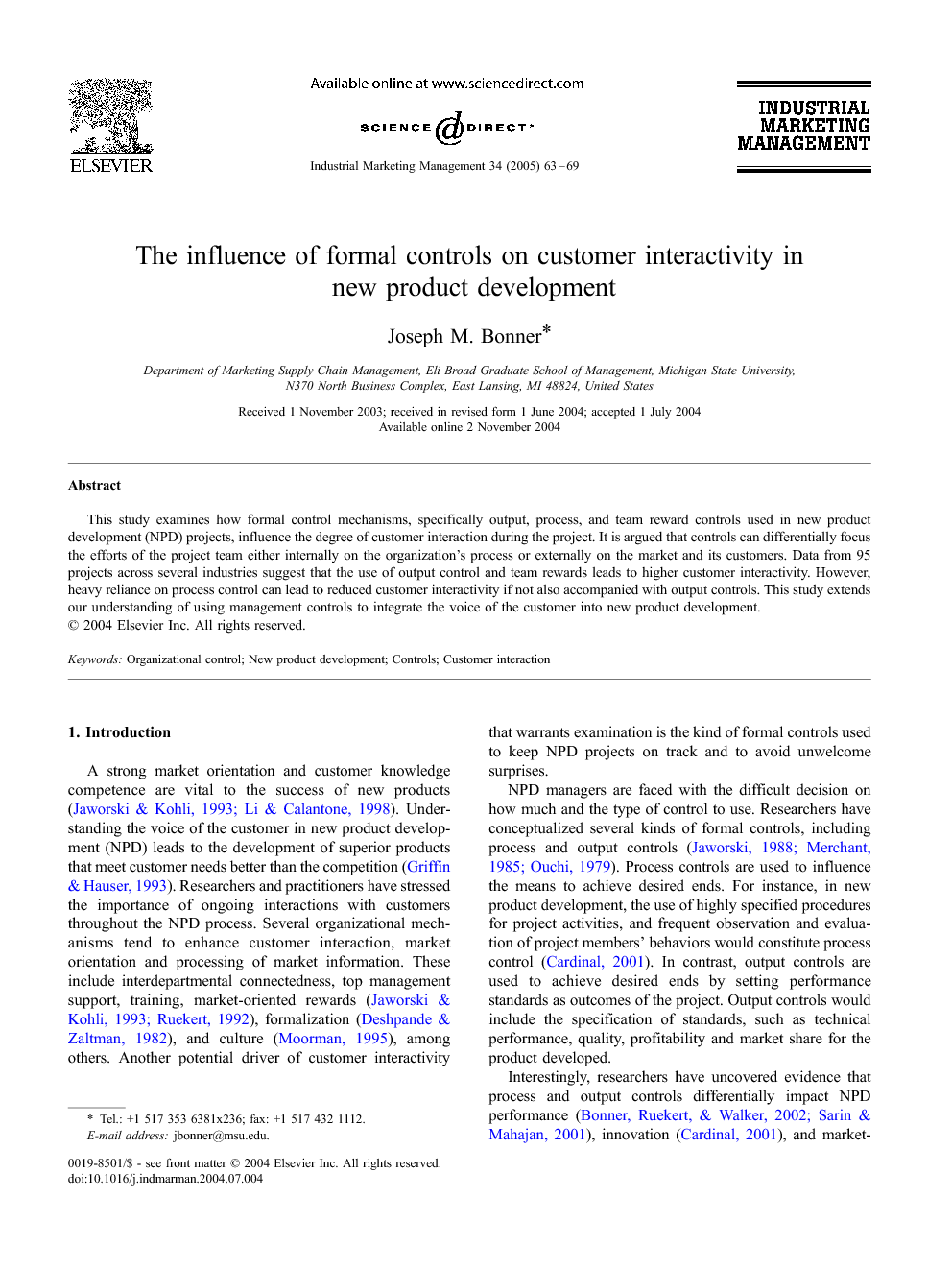 This study examines how formal control mechanisms, specifically output, process, and team reward controls used in new product development (NPD) projects, influence the degree of customer interaction during the project. It is argued that controls can differentially focus the efforts of the project team either internally on the organization's process or externally on the market and its customers. Data from 95 projects across several industries suggest that the use of output control and team rewards leads to higher customer interactivity. However, heavy reliance on process control can lead to reduced customer interactivity if not also accompanied with output controls. This study extends our understanding of using management controls to integrate the voice of the customer into new product development.

A strong market orientation and customer knowledge competence are vital to the success of new products (Jaworski & Kohli, 1993 and Li & Calantone, 1998). Understanding the voice of the customer in new product development (NPD) leads to the development of superior products that meet customer needs better than the competition (Griffin & Hauser, 1993). Researchers and practitioners have stressed the importance of ongoing interactions with customers throughout the NPD process. Several organizational mechanisms tend to enhance customer interaction, market orientation and processing of market information. These include interdepartmental connectedness, top management support, training, market-oriented rewards (Jaworski & Kohli, 1993 and Ruekert, 1992), formalization (Deshpande & Zaltman, 1982), and culture (Moorman, 1995), among others. Another potential driver of customer interactivity that warrants examination is the kind of formal controls used to keep NPD projects on track and to avoid unwelcome surprises. NPD managers are faced with the difficult decision on how much and the type of control to use. Researchers have conceptualized several kinds of formal controls, including process and output controls (Jaworski, 1988, Merchant, 1985 and Ouchi, 1979). Process controls are used to influence the means to achieve desired ends. For instance, in new product development, the use of highly specified procedures for project activities, and frequent observation and evaluation of project members' behaviors would constitute process control (Cardinal, 2001). In contrast, output controls are used to achieve desired ends by setting performance standards as outcomes of the project. Output controls would include the specification of standards, such as technical performance, quality, profitability and market share for the product developed. Interestingly, researchers have uncovered evidence that process and output controls differentially impact NPD performance (Bonner et al., 2002 and Sarin & Mahajan, 2001), innovation (Cardinal, 2001), and marketing management (Jaworski, Stathakopoulos, & Krishnan, 1993), and sales management effectiveness (Challagalla & Shervani, 1996 and Cravens et al., 1993). They have argued that process control tends to lead to routine actions resulting in resistance to change while output control directs attention to the end result (Cardinal, 2001, Jaworski, 1988, Merchant, 1985 and Sarin & Mahajan, 2001). Building on this work, the key notion raised in this study is, perhaps, overreliance on process controls may place too much focus for the project on the internal process, and away from external influences, including customers. However, output controls focus the project on market and financial success that could provide meaningful motivation for project members to interact with external stakeholders, including customers. Another intriguing idea is that the use of output control, in combination with process control, may allow project teams to overcome the disadvantages of process control. Therefore, this study examines both the direct influence of process and output controls on customer interactivity, and the interaction effects between output and process controls. New product success relies upon exceptional teamwork across members from different functional departments (Griffin, 1997 and Olson et al., 1995). NPD managers have increasingly used rewards that are linked to team outcomes in order to foster cross-functional cooperation (Kessler & Chakrabarti, 1996 and Sarin & Mahajan, 2001). An interesting question is whether the use of team rewards increases the intensity of customer interaction in projects. The perspective advanced in this study is that team rewards can serve as a catalyst encouraging all team members, regardless of functional department affiliation, to become more involved with customers. It is important to note that formal control is the focus of this study as opposed to informal control, such as cultural, social, professional, and input controls (Jaworski, 1988). It is felt that formal controls have perhaps a more direct influence at the project level. The next section covers the conceptual framework and hypotheses. This is followed by a description of the methodology used for an empirical test of the hypotheses using a sample of NPD projects. Finally, the results are reported followed by a discussion of the results.

The study raises several interesting questions for follow-on research. The results support the notion that controls influence team members' perceptions and cognitions that, in turn, influence behavior. It would be interesting to examine the nature of these perceptions and test for mediating influences. There could be implications for selecting team members and project leaders to alleviate risk aversion. Another interesting topic is how informal organizational controls interact with formal project controls. For instance, are team rewards compatible with market and hierarchy cultures (Moorman, 1995)? This study examined the influence of controls on customer interactivity. Examining how controls influence other aspects of customer information processing, such as interpretation, usage, and responsiveness, is another interesting topic for future research. In conclusion, this study contributes to our understanding of how organizational mechanisms lead to effective processing of market information (Deshpande & Zaltman, 1982, Jaworski & Kohli, 1993 and Moorman, 1995). Process controls, output controls, and team rewards are frequently used in new product development. However, until this study, it was unclear how these mechanisms influence customer interaction. The study suggests that managers should consider the differential effects of these controls.