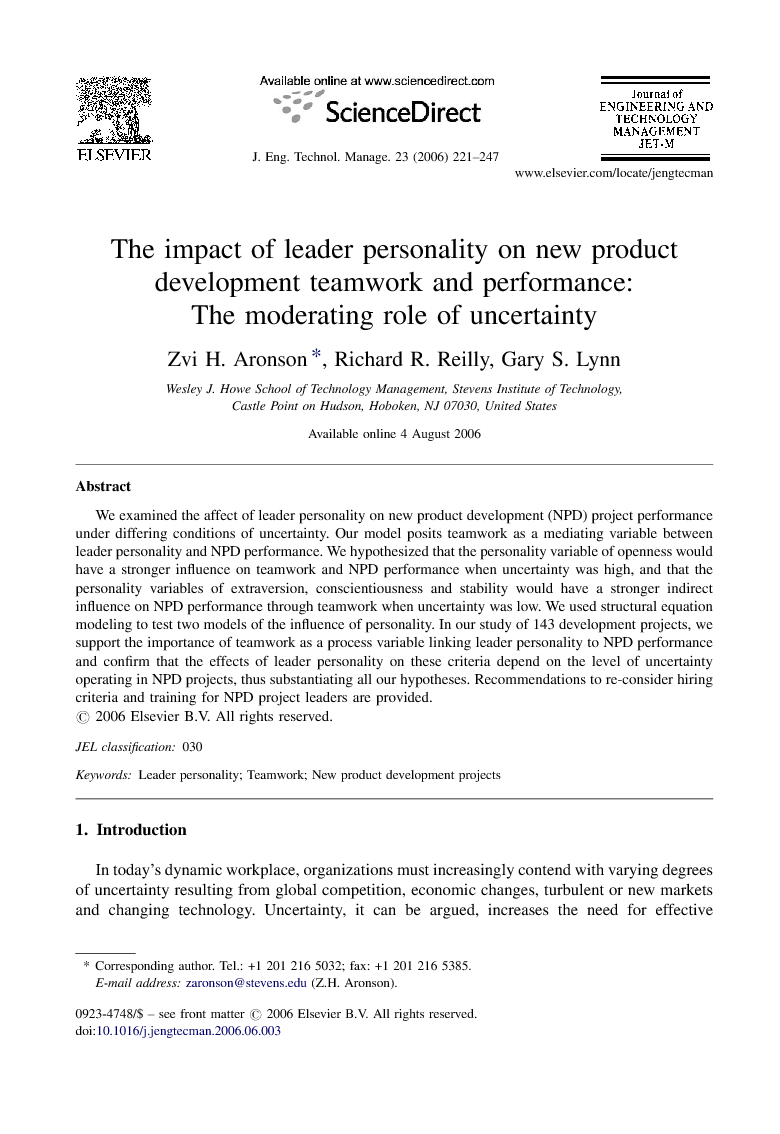 In today's dynamic workplace, organizations must increasingly contend with varying degrees of uncertainty resulting from global competition, economic changes, turbulent or new markets and changing technology. Uncertainty, it can be argued, increases the need for effective leadership in organizations and projects. Researchers such as Atuahene-Gima (2003), Brown and Eisenhardt (1995), Barczak and Wilemon (2001), Clark and Fujimoto (1991) and Sheremata (2000) demonstrate that leader behaviors can enhance or impede project performance. Scholars including Atuahene-Gima (2003), Gupta and Wilemon (1990), Hoegl et al. (2003), Jassawalla and Saahittal (1999), Lynn and Akgun (2003) and Moenaert and Souder (1990) document the value of teamwork behavior for project performance which has strong implications for leadership. The project leader is a pivotal figure, critically affecting both the process and performance of the new product development project. Several behaviors of the project team leaders are particularly germane. These individuals are highly effective in obtaining resources such as more personnel and larger budgets for the project team, and are able to keep teams motivated and focused. Project team leaders also facilitate teamwork and are small-group managers of their project teams. Such leaders often are central to the creation of the overall product concept and communicate it to project team members (Atuahene-Gima, 2003, Sheremata, 2000 and Brown and Eisenhardt, 1995). We are concerned with understanding what personality traits are characteristic of leaders who are successful on these tasks. Personality traits seek to describe and predict the typical behavior of individuals (e.g. Reilly et al., 2002 and Stevens et al., 1999). For example, we center our attention on the personality traits of the project leader that should ensure success on the creative task of developing an effective product concept to present to the customer and facilitate teamwork under varying degrees of uncertainty. We are also concerned with illuminating the processes by which leader personality affects the success of a new product development project. To address these concerns, we empirically investigate the effect of leader personality traits on new product development project performance, via its effect on teamwork under different levels of uncertainty operating in the context of new product development projects. Our review of the literature is guided by our model and graphs presented in Fig. 1, Fig. 2 and Fig. 3. We begin with a description of the teamwork performance link. Then, we present the links between leader personality traits and new product development (NPD) teamwork and performance under differing conditions of uncertainty facing NPD projects.

Our focus was on testing the affect of leader personality on NPD project performance under differing levels of uncertainty. Our model used teamwork as a mediating variable between leader personality and NPD performance. As we hypothesized, leader openness had a significant influence on NPD project performance as well as a significant indirect influence through teamwork under high uncertainty but not under low uncertainty conditions. Additionally, leader conscientiousness, extroversion and emotional stability had a significant indirect influence on NPD project performance through teamwork, and the influence was stronger under low uncertainty conditions. A number of recent studies examined the effect of leader personality on general leader effectiveness (e.g., Moynihan and Peterson, 2001 and Peterson et al., 2003) however, we are not aware of studies that examined the influence of specific leader traits on performance via their effect on teamwork under different levels of uncertainty, in the context of new product development projects. Further, although many argue that leadership effectiveness should be assessed in terms of team or organizational effectiveness (e.g., Hogan et al., 1994), in reality most studies evaluate leadership effectiveness in terms of ratings provided by superiors, peers, or subordinates (Judge et al., 2002). This meta-analysis by Judge and colleagues did not find a single leadership study that had used group performance as the leadership effectiveness measure. More recently, two empirical studies have linked transformational leadership to unit-level performance criteria. Bass and colleagues (Bass et al., 2003) found that transformational leadership predicted unit performance in infantry teams, and Dvir and colleagues (Dvir et al., 2002) found that transformational leadership training resulted in better unit performance relative to groups that did not receive training. Our research contributes to sparse research on the effect of leader traits on effectiveness assessed in terms of NPD project performance, and moderated by uncertainty. Findings show that, the effect of leader personality on NPD teamwork and performance depends on the levels of uncertainty operating in NPD projects, suggesting that different personality styles are more effective depending upon these conditions. To date, these ideas have not been examined extensively. Our results suggest that, under high levels of uncertainty, characteristic of radical innovation, open leaders should be more effective in helping project members consider new or alternative ideas and innovative ways of solving the problems necessary to achieve the goals of the NPD project. Under high levels of uncertainty, as in radical innovation, it is often hard for the buyers to understand the product or how they would use it. Thus, it becomes the leader's role to understand buyers’ behavior and requirements, and balance that with the technological advances of the product. Leaders who are open to information from the customer should be more effective in preventing their team from loosing sight of their goal to develop significantly new products with buyer's desire. Moreover, under uncertain settings, the dominant problem-solving model is characterized by experiential and iterative product development (Brown and Eisenhardt, 1995 and Eisenhardt and Tabrizi, 1995). NPD project leaders high in openness should be more successful on such trial and error tasks. Further, functional diversity (items measuring functional diversity in the current research included: a cross-functional team managed this project; team members worked in several different functional areas before working on this project) in NPD increases the amount and variety of information available to team members. This broadens team members’ understanding of the product development problem and of potential solutions and increases their ability to solve complex problems (Milliken and Martins, 1996). Under high levels of uncertainty, involving functionally diverse people in all development activities offers additional challenges for integrating diverse information, a task that open leaders should perform more effectively. Conversely, under more certain conditions, characteristic of incremental innovation, extensive planning is appropriate, making the conscientiousness of the leader a desirable trait. Conscientious individuals are task focused and should encourage team members to be attentive to the plan, engendering them to work together toward a unified goal. Further, extraverted leaders are more forceful in communicating their vision regarding project goals and plans, fostering high levels teamwork. Moreover, under low uncertainty, as in incremental innovation, unstable NPD project leaders can bring about task related conflict and deliberation which is not beneficial given that project goals are clear. In fact, an argument could be made that under conditions of high uncertainty, characteristic of radical innovation, stable leaders who are less conflictual might inhibit the development of breakthrough ideas, making this trait in a NPD project leader less desirable.