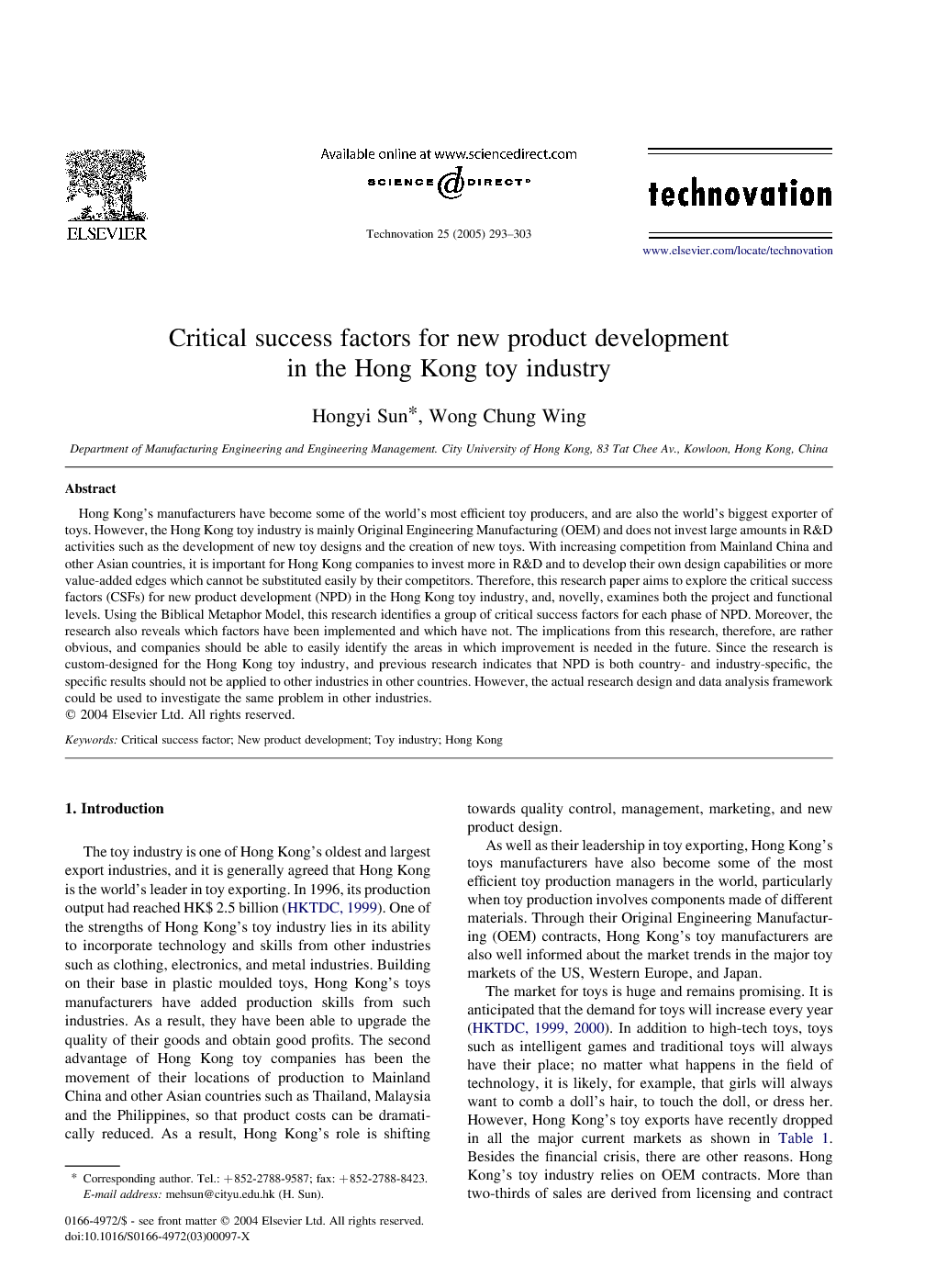 Hong Kong’s manufacturers have become some of the world’s most efficient toy producers, and are also the world’s biggest exporter of toys. However, the Hong Kong toy industry is mainly Original Engineering Manufacturing (OEM) and does not invest large amounts in R&D activities such as the development of new toy designs and the creation of new toys. With increasing competition from Mainland China and other Asian countries, it is important for Hong Kong companies to invest more in R&D and to develop their own design capabilities or more value-added edges which cannot be substituted easily by their competitors. Therefore, this research paper aims to explore the critical success factors (CSFs) for new product development (NPD) in the Hong Kong toy industry, and, novelly, examines both the project and functional levels. Using the Biblical Metaphor Model, this research identifies a group of critical success factors for each phase of NPD. Moreover, the research also reveals which factors have been implemented and which have not. The implications from this research, therefore, are rather obvious, and companies should be able to easily identify the areas in which improvement is needed in the future. Since the research is custom-designed for the Hong Kong toy industry, and previous research indicates that NPD is both country- and industry-specific, the specific results should not be applied to other industries in other countries. However, the actual research design and data analysis framework could be used to investigate the same problem in other industries.

The toy industry is one of Hong Kong’s oldest and largest export industries, and it is generally agreed that Hong Kong is the world’s leader in toy exporting. In 1996, its production output had reached HK$ 2.5 billion (HKTDC, 1999). One of the strengths of Hong Kong’s toy industry lies in its ability to incorporate technology and skills from other industries such as clothing, electronics, and metal industries. Building on their base in plastic moulded toys, Hong Kong’s toys manufacturers have added production skills from such industries. As a result, they have been able to upgrade the quality of their goods and obtain good profits. The second advantage of Hong Kong toy companies has been the movement of their locations of production to Mainland China and other Asian countries such as Thailand, Malaysia and the Philippines, so that product costs can be dramatically reduced. As a result, Hong Kong’s role is shifting towards quality control, management, marketing, and new product design. As well as their leadership in toy exporting, Hong Kong’s toys manufacturers have also become some of the most efficient toy production managers in the world, particularly when toy production involves components made of different materials. Through their Original Engineering Manufacturing (OEM) contracts, Hong Kong’s toy manufacturers are also well informed about the market trends in the major toy markets of the US, Western Europe, and Japan. The market for toys is huge and remains promising. It is anticipated that the demand for toys will increase every year (HKTDC, 1999 and HKTDC, 2000). In addition to high-tech toys, toys such as intelligent games and traditional toys will always have their place; no matter what happens in the field of technology, it is likely, for example, that girls will always want to comb a doll’s hair, to touch the doll, or dress her. However, Hong Kong’s toy exports have recently dropped in all the major current markets as shown in Table 1. Besides the financial crisis, there are other reasons. Hong Kong’s toy industry relies on OEM contracts. More than two-thirds of sales are derived from licensing and contract manufacturing for overseas toy companies (HKTDC, 1996). Many of Hong Kong toy companies do not invest much in R&D, such as the development of new toy designs or the creation of new toys. The lack of R&D and the tendency to produce under OEM contracts have also hindered the development of Hong Kong brand names, although there are a few internationally recognized Hong Kong brand names, such as Playmates, Videotech, and Universal Matchbox. Since the holders of brand names capture a significant percentage of a product’s added value at the retail level, Hong Kong toy companies generally operate at relatively low profit margins. A threat over the next few years will come from increased competition from toy manufacturers in Mainland China and selected companies from Southeast Asia. In Mainland China, the reform of state-owned enterprises could create dynamic, profit-motivated toy companies with a strong outward orientation. These companies will compete for OEM contracts currently held by Hong Kong companies. Therefore, it is important for Hong Kong companies to invest more in R&D, and to develop their own design capabilities or more value-added edges which cannot be easily substituted by their competitors. However, the history of Original Design Manufacturing (ODM) is relatively short, and experience in toy design and development is limited. The research reported in this paper aims to explore the success factors for new product development (NPD) in Hong Kong toy companies. Research on the critical success factors (CSFs) for NPD is substantial (Balachandra and Friar, 1997, Cooper and Kleinschmidt, 1995 and Spivey et al., 1997). However, researchers from Germany, Japan, Italy. and the USA have found that each country has traditional strengths and weakness in NPD (Jürgen, 2000). For example, the USA has particular strengths in the PC industry, Italy and Germany in the machine industry, and Japan and Germany in motor vehicles. These findings imply that NPD may be country-specific. There also seems to be little industry consensus on what constitutes ‘best practice’ concerning NPD (Jürgen, 2000, p.11). This implies that the successful factors for NPD are industry-specific. Recent research on NPD has tended to focus on specific industries, for example, the semiconductor industry (Iansitia and Westa, 1999), auto industry (Dröge et al., 2000), electronics industry (Orihata and Watanabe, 2000), and the food industry (Ilori et al., 2000). With its global market, short product life-cycle (as short as a couple of months), small R&D team for each new product (one or two persons), and cross-border manufacturing in China and other Asia countries, the Hong Kong toy industry should specialize in NPD. However, no research investigation has been conducted on the success factors for NPD in Hong Kong toy companies. The research reported in this paper was designed especially to explore the success factors for NPD in the Hong Kong toy industry. The paper is organized as follows. After this introduction, the relevant studies from the literature are reviewed in the second section. Research methodology and empirical data are reported in the third section, followed by data analysis and results in the fourth section. In the fifth section the results are discussed and implications explored. The final section summarizes the research.

5.1. Critical success factors for NPD This research has revealed the CSFs for NPD in HK toy companies. Using the Delphi method and the Biblical model to incorporate the degree of importance and the extent of implementation of various factors, the research revealed those important factors that were not sufficiently implemented in practice. It also revealed those factors that were well implemented but not important. With this classification, the implications to be drawn from the research are very clear. By using the Biblical model, companies will discover where their efforts should be put in the future. Furthermore, the efforts in each phase are also clearly identified, which makes job classification in NPD easier and clearer. The research method has an advantage in that it not only identifies the CSFs, but also measures the efforts that companies put into them. Causal relationship research in contrast does not tell us whether the identified CSFs have been fully implemented by industry people, nor whether they know the factors have been implemented. This research study suggests that there may be a disparity or gap between the factors that are important and those that are implemented. The implementation of CSF will take time and there may be a learning effect. By examining the distribution of factors in the Biblical model, it was found that only 8 out of the 54 factors (15%) belong to the ‘Promised Land’, while 20% fall under the ‘Broken Promises’ category. This suggests that much work is needed to improve NPD in HK toy companies. On the other hand, 14% of the factors fall into the category of ‘Changing Wine Into Water’, namely, consuming resources meaninglessly. It is highly recommended that companies shift from putting effort into factors that are not important to those that are. 5.2. The balance between phases and integration This research has incorporated not only the phases but also the integration features of NPD. The results of the study should discourage companies and researchers from studying only the phases or only the integration aspects. Both the framework (i.e., Fig. 1 and Table 3) and the detailed factors cover both phases and cross-functional issues. However, it was found that cross-functional issues are more important in the early stage of NPD, especially during the first phase corresponding to idea generation and conceptual design. This reminds us of the saying that ‘a good beginning is half the success’. Gradually through the process of NPD, the individual issues become relatively more important while cross-functional issues get relatively less important. In the last phase, cross-functional co-operation was listed as the least important factor. Comparing the four phases, it was found that work within the specification and commercialization phases (the second and fourth phases respectively) is more effective than in the other two phases. There are many more factors in the ‘Promised Land’ but fewer in the ‘Changing Wine into Water’ categories in these two phases. Also, there is a positive correlation between the degree of importance and the extent of implementation in these two phases (see 4.2 and 4.4). In contrast, the first phase (i.e. idea and conceptual selection) and the third phase (i.e. prototype development) are relatively weak in the HK toy industry, and constitute the areas of NPD for which future improvement is most needed. 5.3. The balance between company level and project level Previous research has focused mainly on the company level and has therefore identified CSFs for the company instead of the projects. That type of research reflects the opinions of top managers rather than of people on the floor. It is hard for people working at the operational level to draw implications from such studies. Implications such as where and when the CSFs should be implemented, and who should implement them, are not clear. For HK toy companies, it seems that project level management is more important than company level management in NPD. In fact, the leadership, goal, vision, and communication of the project team are in the most important factor group, whilst senior management issues are classified into less important categories at both the early and later stages of NPD. It is difficult to determine whether this is a general, wider characteristic or is limited to the HK toy industry which has small and simple products. Again, however, the importance is relative. Although project level issues are more important than those at the company level in HK toy companies, it does not mean that they are not important at all. It is suggested that companies and researchers should retain a balance between company and project level issues.