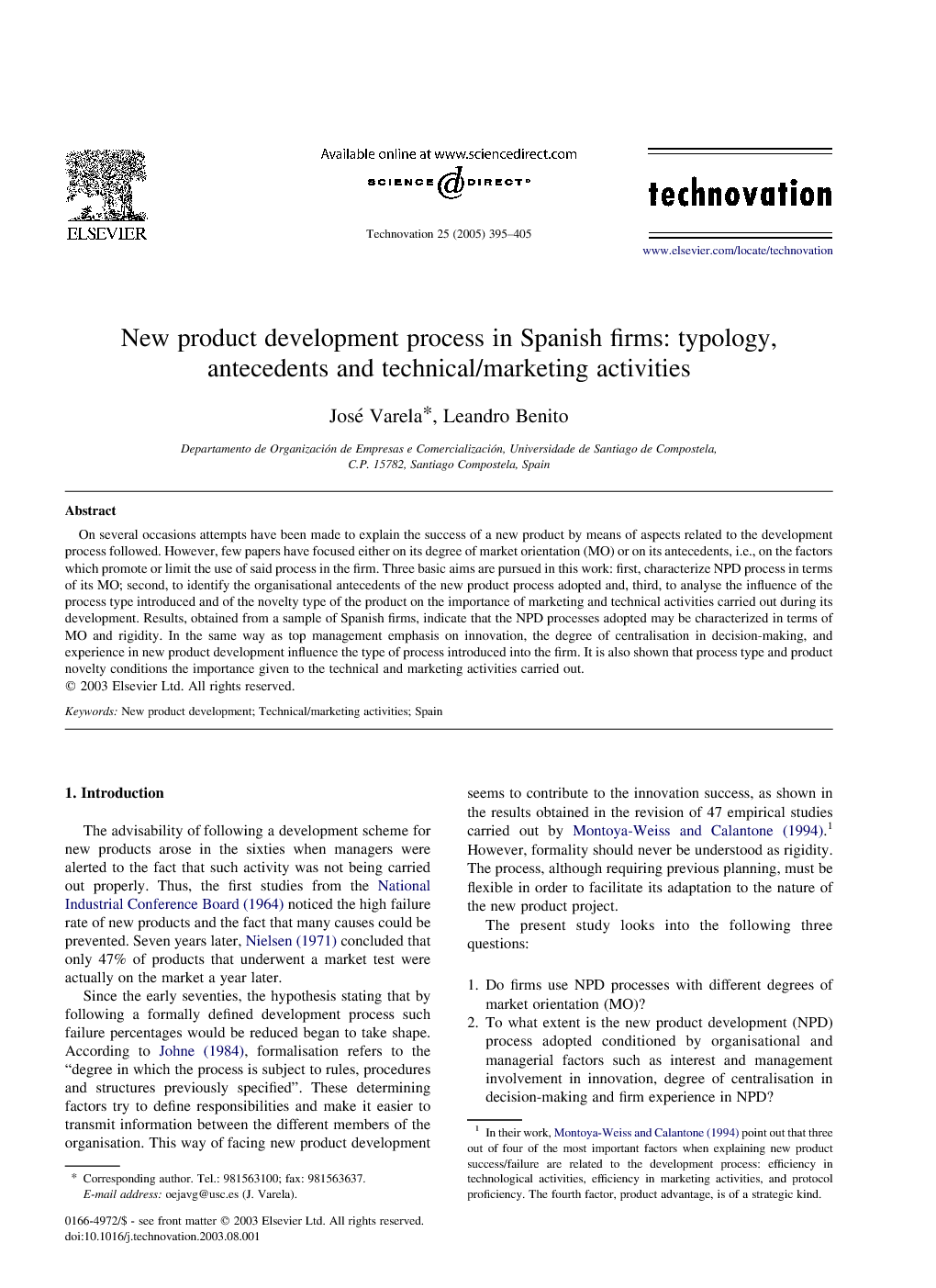 On several occasions attempts have been made to explain the success of a new product by means of aspects related to the development process followed. However, few papers have focused either on its degree of market orientation (MO) or on its antecedents, i.e., on the factors which promote or limit the use of said process in the firm. Three basic aims are pursued in this work: first, characterize NPD process in terms of its MO; second, to identify the organisational antecedents of the new product process adopted and, third, to analyse the influence of the process type introduced and of the novelty type of the product on the importance of marketing and technical activities carried out during its development. Results, obtained from a sample of Spanish firms, indicate that the NPD processes adopted may be characterized in terms of MO and rigidity. In the same way as top management emphasis on innovation, the degree of centralisation in decision-making, and experience in new product development influence the type of process introduced into the firm. It is also shown that process type and product novelty conditions the importance given to the technical and marketing activities carried out.

The advisability of following a development scheme for new products arose in the sixties when managers were alerted to the fact that such activity was not being carried out properly. Thus, the first studies from the National Industrial Conference Board (1964) noticed the high failure rate of new products and the fact that many causes could be prevented. Seven years later, Nielsen (1971) concluded that only 47% of products that underwent a market test were actually on the market a year later. Since the early seventies, the hypothesis stating that by following a formally defined development process such failure percentages would be reduced began to take shape. According to Johne (1984), formalisation refers to the “degree in which the process is subject to rules, procedures and structures previously specified”. These determining factors try to define responsibilities and make it easier to transmit information between the different members of the organisation. This way of facing new product development seems to contribute to the innovation success, as shown in the results obtained in the revision of 47 empirical studies carried out by Montoya-Weiss and Calantone (1994).1 However, formality should never be understood as rigidity. The process, although requiring previous planning, must be flexible in order to facilitate its adaptation to the nature of the new product project. The present study looks into the following three questions: 1. Do firms use NPD processes with different degrees of market orientation (MO)? 2. To what extent is the new product development (NPD) process adopted conditioned by organisational and managerial factors such as interest and management involvement in innovation, degree of centralisation in decision-making and firm experience in NPD? 3. What influence do the NPD process adopted and the novelty type have on the importance given to the technical and marketing activities which make up the process? So then the study makes three contributions to literature on NPD. First, it looks into the type of processes adopted in terms of MO. Second, it examines to what extent several organisational and managerial characteristics affect the type of NPD process used. Third, it analyses how the process adopted and the product novelty influence the mean importance given to the technical and marketing activities of the process. In the sections to follow we present the conceptual framework and the proposed relationships. Then, we explain the research design and review the findings from a sample of 75 firms in Spain. In the final sections the results and managerial implications will be discussed, and suggestions for further research will be proposed.

Several studies explain the success of new products because of the development process carried on by the firm. Nevertheless, few works have concentrated on the identification of its M.O. degree, in the same way as on its background, i.e, in the factors that promote or impede the use of this process in the company. This work has endeavoured to add to the literature about new products, studying three important aspects in depth: First, the characterization of the NPD processes in terms of its M.O.; second, the identification of organizational antecedents of the NPD process adopted by the firms and third, analyzing the influence of the type of process followed and of the product novelty on the importance of technical and marketing activities done throughout its development. The generic contribution of this work lies in the identification of the process type followed through the “market orientation” and “rigidity” dimensions, as well as its inclusion as an antecedent of the importance of technical and marketing activities in the N.P.D. The research carried out leads us to three basic conclusions. First: through “market orientation” and “rigidity” dimensions, it is possible to identify the type of process adopted by the firms for the development of new products. The combination of both dimensions has an influence on the three process generations identified in literature (Cooper, 1990 and Cooper, 1994). From the three identified process groups, only two—which correspond to the second and third generation—show a high M.O. Second: the consideration of the experience in the new product development, the top management emphasis on innovation and the decision-making centralisation have the ability to differentiate between the NPD processes with a high or a low M.O. Until now, these factors had been treated as direct antecedents of proficiency (Dwyer and Mellor, 1991) and importance (Rochford and Rudelius, 1997) of the process activities. Results support the idea that the second and third generation NPD processes introduction will be facilitated by a board of managers who are conscious of innovation, and decentralise the decision-making. Experience in the development of new products is another factor that determines the process type to follow: experience makes it easier for the firm to appeal to processes with a high M.O. Then, if top management wishes to introduce NPD processes with a high M.O. they should stand out their commitment with innovation, in the same way as allowing a higher decentralisation in the decision-making. They are also aware that the process will improve the M.O. as the firm increases its experience in NPD. Third: the process type determines the average importance of technical and marketing activities, whereas the novelty type does not have a significant influence. Accordingly, the importance given to the process activities, which is considered as an antecedent of its effective performance, will be higher when the NPD process has a high M.O. This work supports previous studies where it is highlighted how important it is for firms to have a formal NPD process with high M.O. By means of a general success measure, we have found that firms that follow market orientated processes—second or third generation processes—get better results than those which do not use these schemes. This study presents limitations linked basically to the measurement of product novelty and the retrospective nature of the data. As for the first limitation, Danneels and Kleinschmdit, 2001 and García and Calantone, 2002 suggest that the product novelty for a firm is a multidimensional concept, and so its measure must include both newness in market terms, and newness in technological terms. Regarding the data, their retrospective nature makes them susceptible to memory loss and attribution bias. Finally, because the NPD process is such a complex subject, additional lines of research will inevitably arise. In this sense, we find it interesting to consider the effect of the activity sector on new product development, a variable not considered in this study due to the dispersal of the sample among sectors, or aspects such as pressure and the market growth and the competitiveness degree, factors that may possibly help to explain the behaviour of firms as regards the type of process adopted and the activities involved in NPD.