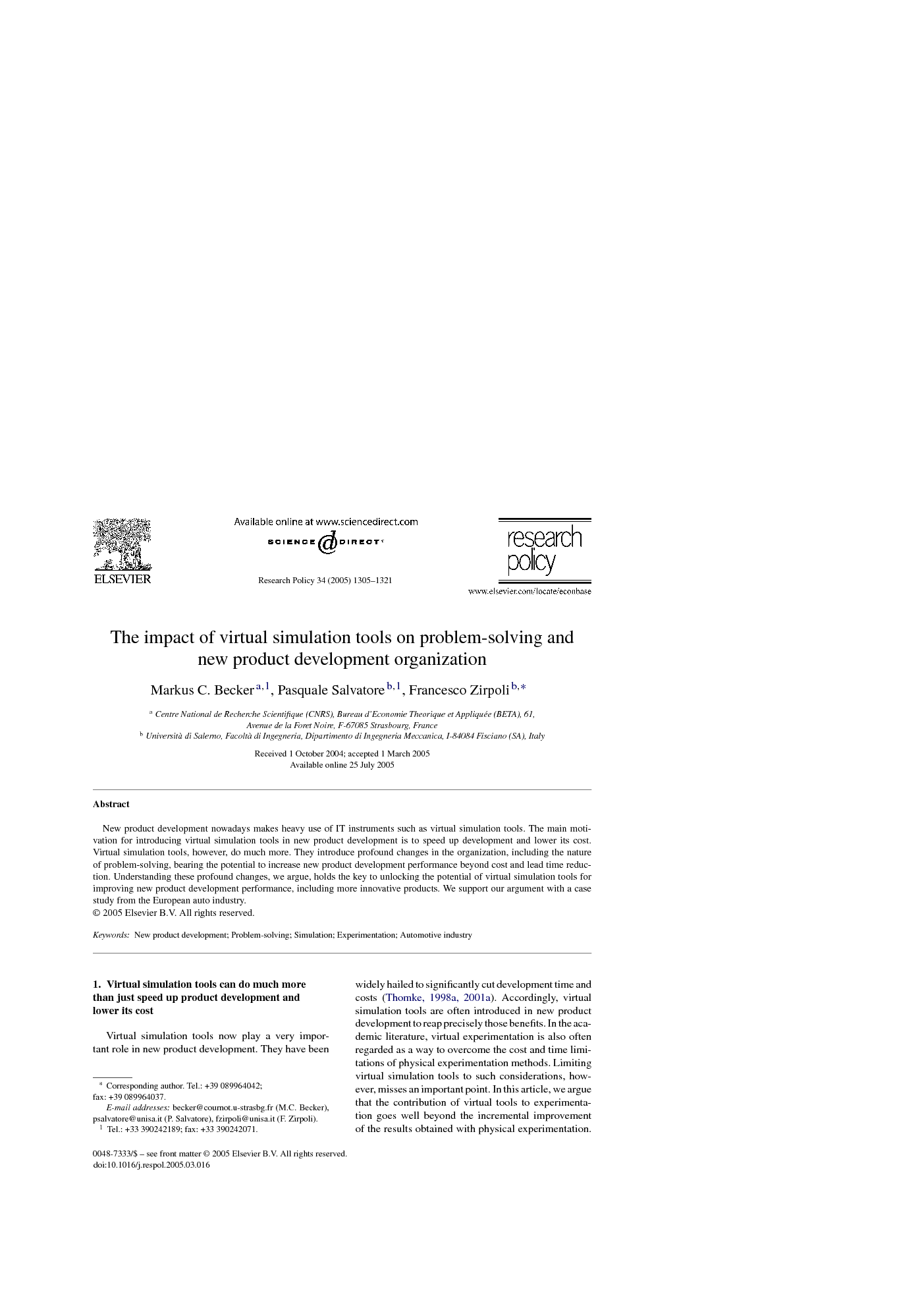 Virtual simulation tools now play a very important role in new product development. They have been widely hailed to significantly cut development time and costs (Thomke, 1998a and Thomke, 2001a). Accordingly, virtual simulation tools are often introduced in new product development to reap precisely those benefits. In the academic literature, virtual experimentation is also often regarded as a way to overcome the cost and time limitations of physical experimentation methods. Limiting virtual simulation tools to such considerations, however, misses an important point. In this article, we argue that the contribution of virtual tools to experimentation goes well beyond the incremental improvement of the results obtained with physical experimentation. Virtual simulation techniques can do much more than just reduce the cost and increase the speed of problem-solving (West and Iansiti, 2003). At the same time, though, they also trigger profound changes in the nature of problem-solving (Baba and Nobeoka, 1998). Building on previous studies that have established the importance of organization in new product development performance (Rothwell, 1977, Rothwell, 1992 and Pavitt, 1998), we argue that in order to reap the full potential of virtual simulation tools, beyond cost and lead time effects, adapting the organization is required. To do that, it is beneficial to understand how virtual simulation tools impact problem-solving. One of the most important motivations for introducing virtual simulation tools is that cost and time requirements of physical experiments are not always compatible with strict new product development (henceforth NPD) process time and cost constraints. Due to these latter, engineers often opt for the “carry over” of components and system of components from the previous model generation to the next one, leading to conservative design. Moreover, physical prototypes incorporate engineering solutions that often are already obsolete by the time the prototype is built. The results of physical experimentation are thus often not fully relevant for engineering development. The use of virtual development tools contributes to overcome these limitations. In fact, they not only help reduce experimentation costs due to the speeding up of the testing phase, the reduction of the number of costly physical prototypes and redesign linked to their fast obsolescence, they also improve design quality via the availability of information very early on in the development process (front loading problem-solving, Thomke, 1998a). Virtual tools, however, help engineers to observe phenomena, which are much less readily observable otherwise. To illustrate the point, consider the following example: cost reasons provide a severe limit to the number of physical prototypes that can be built for crash tests. At the same time, however, it is imperative car models pass the NCAP crash test (http://www.euroncap.com) with a good mark. Given the fact that there are at least 400 components (our interview with product development engineer) that affect such a crash test, it is impossible to isolate precise cause–effect relationships among all the parts without repeating the experiment several times. Hence, car designers and engineers have to manage a trade off between costs and accuracy of the experimentation. Virtual simulation tools have enabled, in this respect, almost infinite iterations of the same experiment and, importantly, isolating one parameter in each run. As compared with physical experimentation, they therefore approach a “laboratory-type controlled environment”. In this way, a great variety of hypotheses on the causal relationship between the design characteristics and the crash test performances can be tested (at a reasonable cost). As Schön (1983, pp. 157–158) has explained, the reason is that the residual traces left by using virtual simulation tools are stable, and the designer can examine them at leisure while the pace of action can be varied at will. Savings in cost and (preparation) time therefore also have another, indirect, effect: they provide the possibility to perform learning sequences in which one takes account of previously unanticipated results (Schön, 1983, pp. 157–158). In this way, virtual experimentation allows testing hypotheses that are not constrained by the logical bounds of the premises one starts from. It thereby enables non-conservative design, which is important in order to achieve distinctive new designs (Wheelwright and Clark, 1992).

Throughout this article, we have maintained that virtual simulation tools trigger profound changes in the organization, including the nature of problem-solving. In the previous section, we have identified that virtual simulation tools have an important impact on the redefinition of the set of options to be taken into consideration in problem-solving. In particular through this causal mechanism, we have argued that virtual simulation tools provide the possibility of more innovative designs, under the condition that the possibilities they provide are matched with organizational and management structures required to realize these possibilities—an organizational challenge, not a technical issue. In this concluding section, we argue that the impact of virtual simulation tools on the nature of problem-solving is so strong as to shift gears to a substantially different kind of problem-solving altogether. The problem-solving strategy we refer to has been termed ‘abduction’.8 The idea of abduction goes back at least to pragmatist philosopher Charles Sanders Peirce (1934). Recent studies in the engineering literature have argued that abductive reasoning processes are the most important aspect of knowledge creation in designing new products ( Baba and Nobeoka, 1998 and Itoh, 2003). Abductive reasoning refers to the articulation of a hypothesis that one believes provides a consistent explanation of the various observed data (Baba and Nobeoka, 1998, p. 646). The important difference to hypothesis-generation by induction, i.e. from a number of specific observations, is that hypotheses generated by abductive reasoning are generated not exclusively within the given framing of the problem (such as in induction). An important implication of the last characteristic is that abduction can be applied also when the problem at hand is unstructured, while both deduction and induction require the problem at hand to be structured. For induction, the minimum structural requirement is that the instances used to induce regularity are in some respect similar to each other. For deduction, one needs to be able to map the different elements in the law to elements of the problem ( Baba and Nobeoka, 1998, Pisano, 1994 and Pisano, 1996). In employing abductive reasoning, one also draws on background knowledge and implicit assumptions. The hypotheses generated are plausible hypotheses, providing a possible explanation of some puzzling phenomenon (Magnani, 2001). They articulate intuition, experiential knowledge that is not formalized. They involve a leap of imagination. Because the hypotheses articulated are not based on such a fundament of formalized knowledge, virtual experimentation allows testing hypotheses that are not constrained by the logical bounds of the premises one starts from. More room for creativity is thus created, enabling non-conservative design, which is important in order to achieve distinctive new designs (Wheelwright and Clark, 1992). For the same reason, however, the validity of the hypothesis is not confirmed either (Itoh, 2003). It therefore requires testing in order to be disconfirmed or supported. Abductive reasoning and methods for testing the hypotheses generated by it, go hand in hand. In a first moment, abductive reasoning allows generating non-conservative hypotheses that contain novelty. In a second moment, subjecting these novel hypotheses to testing can then disconfirm or support them. Together, these two moments present a way of problem-solving that is different in kind from an iterative deduction–induction loop (see Fig. 3). At this point, it is important to note that both elements need to be in place (Vincenti, 1990, Henderson, 1999 and Nelson, 2003). Disposing of adequate methods to test the specific hypotheses in question will be crucial for whether one can shift into a second problem-solving strategy, other than iterative deduction–induction cycles. Also note that which of the three problem-solving strategies dominates is bound to shift over the course of the development project, deduction perhaps often dominating in earlier stages and induction (experimentation) in later stages. As a parting thought, consider that virtual simulation tools have a two-fold effect on product development organization: they increase standardization, organizational memory and the possibility of control of the design process on one hand. On the other hand, they provide the possibility to test more unconventional hypotheses (extending the search space). This circumstance, confirmed by the field work, adds new insight on the strategies that a firm can implement to foster innovation. The innovative thrust of an organization appears to be influenced not only by individual factors such as creativity of engineers, but also by organizational interactions and choices. In other words, using virtual simulation tools opens up new design possibilities allowing for non-conservative design even in later stages of development projects. At the same time, however, it also potentially increases the controllability of the design process. It will be up to managers to design organizational mechanisms and incentive structures that push towards one direction or another. In firms where the innovativeness and originality of design is a strategic priority, engineers will be pushed to use virtual tools to test non-conventional solutions. Their design activity will still be constrained by the procedure for virtual development but managerial attention will not be devoted to standardization of design spaces and domains. It is interesting to note that the control aspect of virtual simulation tools will accrue almost by itself, in the light of the fact that procedures for virtual development are required in order for virtual simulation to provide reliable results. Whether the use of virtual simulation will lead to innovative designs, on the other hand, depends almost entirely on the alignment and fine-tuning of the procedures to the tools and the organization structure and management system.9 It seems doubtful whether such alignment and fine-tuning can succeed ‘by itself’ in such a way that the potential of what has been termed ‘abductive’ problem-solving can be unlocked. It is an organizational challenge.