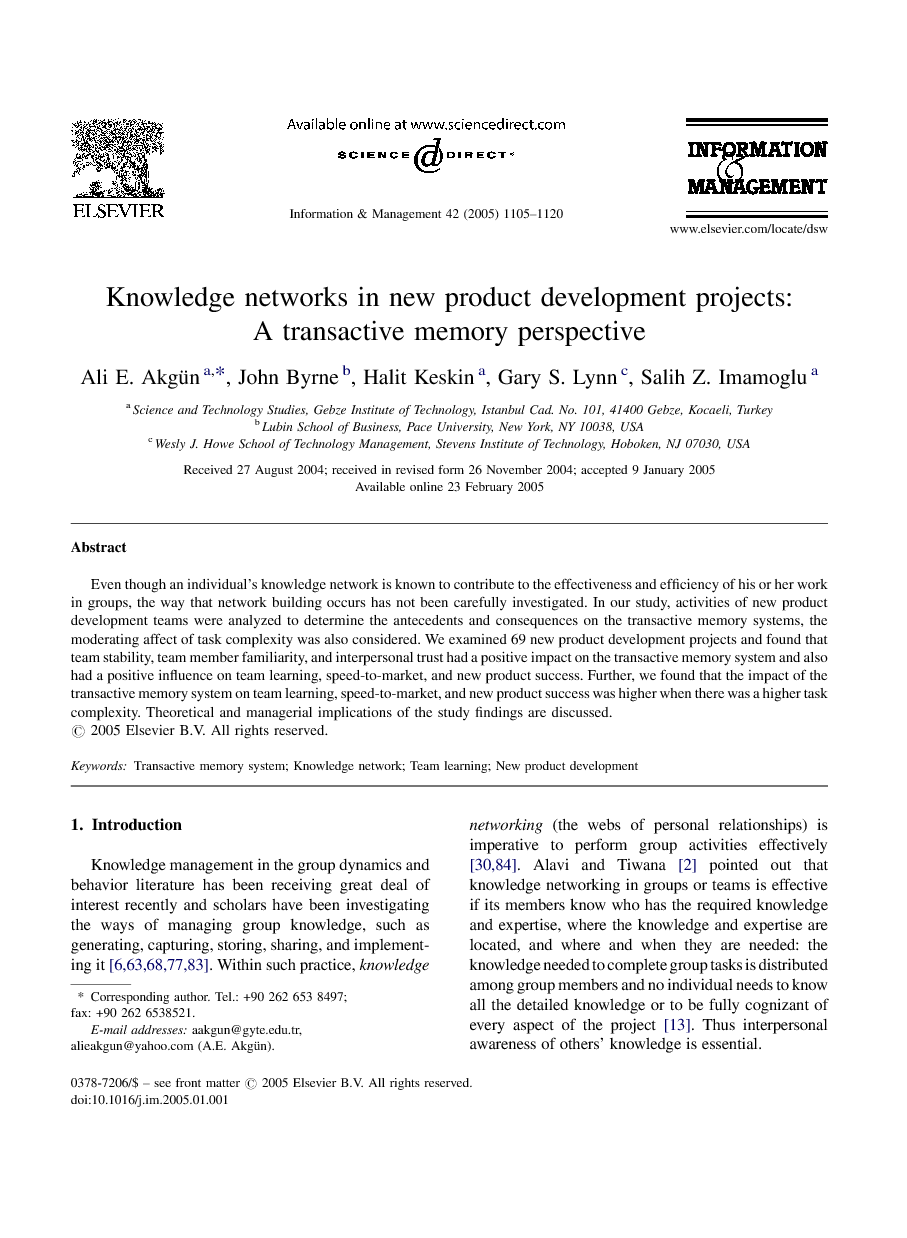 Even though an individual's knowledge network is known to contribute to the effectiveness and efficiency of his or her work in groups, the way that network building occurs has not been carefully investigated. In our study, activities of new product development teams were analyzed to determine the antecedents and consequences on the transactive memory systems, the moderating affect of task complexity was also considered. We examined 69 new product development projects and found that team stability, team member familiarity, and interpersonal trust had a positive impact on the transactive memory system and also had a positive influence on team learning, speed-to-market, and new product success. Further, we found that the impact of the transactive memory system on team learning, speed-to-market, and new product success was higher when there was a higher task complexity. Theoretical and managerial implications of the study findings are discussed.

Knowledge management in the group dynamics and behavior literature has been receiving great deal of interest recently and scholars have been investigating the ways of managing group knowledge, such as generating, capturing, storing, sharing, and implementing it [6], [63], [68], [77] and [83]. Within such practice, knowledge networking (the webs of personal relationships) is imperative to perform group activities effectively [30] and [84]. Alavi and Tiwana [2] pointed out that knowledge networking in groups or teams is effective if its members know who has the required knowledge and expertise, where the knowledge and expertise are located, and where and when they are needed: the knowledge needed to complete group tasks is distributed among group members and no individual needs to know all the detailed knowledge or to be fully cognizant of every aspect of the project [13]. Thus interpersonal awareness of others’ knowledge is essential. The idea of knowledge networking in general and interpersonal awareness of other's knowledge in particular have been investigated as the transactive memory system (TMS) in small group management research [33] and [51]. A TMS requires that individuals, in continuing relationships, utilize each other as memory sources or aids to supplement their own limited and unreliable memories and knowledge [79]. A TMS provides a knowledge network among individuals allowing the interchange of data, information, and knowledge. However, empirical investigations were mostly conducted in laboratory conditions, on relationships among intimate couples and small groups, and ignoring multi-functional work groups, such as new product development (NPD) teams. Such project teams are specific forms of organizational work-groups. NPD projects generally involve [14], [20] and [23]: • people with different views, perspectives, functional backgrounds, and knowledge, and concurrently, their interaction with other units in the organization; • team processes (e.g., conflict management, motivation, teamwork); and • project related task work. This complex nature of NPD projects requires effective team knowledge of who has and needs particular information. For instance, Lewis [42] argued that they benefit when team members utilize their unique expertise and integrate the differentiated expertise of other members. She further stated that such a TMS was “an especially appropriate concept for understanding how knowledge-worker teams can optimize the value of members’ knowledge.” Thus, investigating TMS theory in NPD project teams could be valuable by helping recognize networking task-specific expertise and knowledge for project related tasks. Accordingly, the goal of our study was to investigate the factors effecting TMS and the consequences of it in an NPD project team context.

Antecedents and consequences of TMS in NPD project teams were investigated. Our findings demonstrated that an effective TMS occurs in an NPD project team when team members remain on the team from pre-prototype through launch of product development process, rely on other members when they do their jobs, approach their tasks with professionalism and dedication, talk freely to other members about project related issues and respond constructively and caringly, and develop an emotional ties in their working relationship. In addition, when team members knew each other and had prior personal interaction at the time the project team was formed, the TMS was developed sooner. Interestingly, even though group behavior literature has noted the importance of communication and proximity for TMS development [37], our study did not find statistical support of the importance of these aspects on the development of TMS in project teams. This study also tested the impact of TMSs on project outcomes, such as team learning, speed-to-market, and new product's success in the market place. The bi-variate correlations demonstrated that TMS has a positive association with team learning, speed-to-market, and NPS. This was of particular note when teams established an effective TMS, as the project team, develops the new product with fewer technical problems, finds and solves the product problem areas with which customers were dissatisfied, and develops and launches product faster and better. However, it should also be noted that the impact of TMSs on project outcomes is contingent upon the project's complexity; when the tasks rely on established bodies of knowledge, and there is a clearly defined way to do the major types of project's work, the impact of TMS on team learning, speed-to-market and NPS will be less. Also, when the repetitiveness of the elements of project's tasks is low—team members’ work is non-routine, the impact of TMS on speed-to-market and NPS will be higher. Non-routine work requires a socially distributed knowledge network more than routine work, because less repetition of the elements of project's tasks requires team members to ask other people to deal with emerging new information and knowledge.