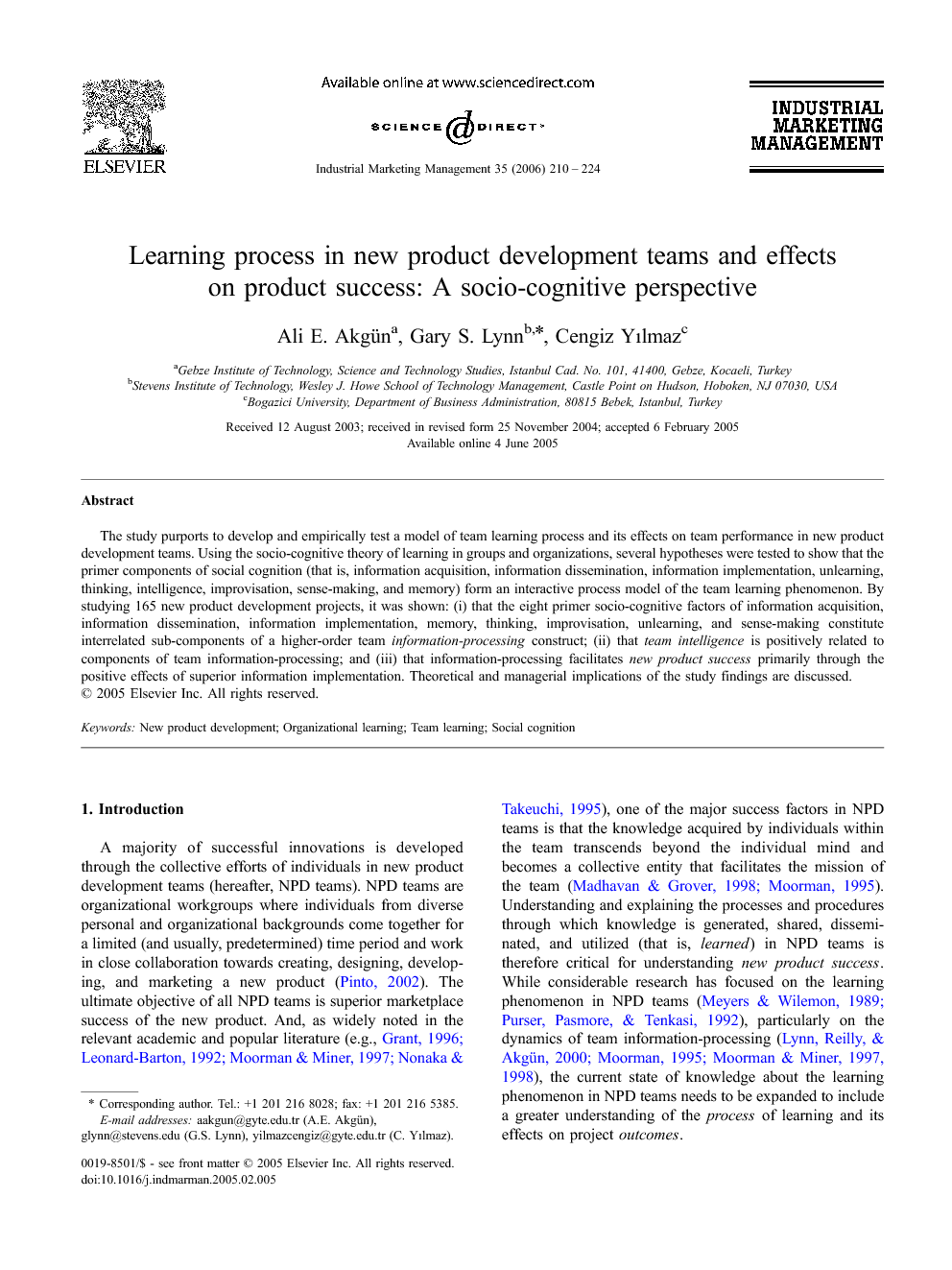 A majority of successful innovations is developed through the collective efforts of individuals in new product development teams (hereafter, NPD teams). NPD teams are organizational workgroups where individuals from diverse personal and organizational backgrounds come together for a limited (and usually, predetermined) time period and work in close collaboration towards creating, designing, developing, and marketing a new product (Pinto, 2002). The ultimate objective of all NPD teams is superior marketplace success of the new product. And, as widely noted in the relevant academic and popular literature (e.g., Grant, 1996, Leonard-Barton, 1992, Moorman & Miner, 1997 and Nonaka & Takeuchi, 1995), one of the major success factors in NPD teams is that the knowledge acquired by individuals within the team transcends beyond the individual mind and becomes a collective entity that facilitates the mission of the team (Madhavan & Grover, 1998 and Moorman, 1995). Understanding and explaining the processes and procedures through which knowledge is generated, shared, disseminated, and utilized (that is, learned) in NPD teams is therefore critical for understanding new product success. While considerable research has focused on the learning phenomenon in NPD teams ( Meyers & Wilemon, 1989 and Purser et al., 1992), particularly on the dynamics of team information-processing ( Lynn et al., 2000, Moorman, 1995, Moorman & Miner, 1997 and Moorman & Miner, 1998), the current state of knowledge about the learning phenomenon in NPD teams needs to be expanded to include a greater understanding of the process of learning and its effects on project outcomes. One way to expand the scholarship on NPD team learning is by cross-fertilization with different streams of research in this area (Akgün et al., 2003 and Easterby-Smith, 1997). The organizational learning literature, for instance, offers a rich basis for identifying and understanding the key factors and mechanisms through which learning occurs in groups ( Dixon, 1992 and Huber, 1991). Similarly, studies on group psychology, small group researches, and social psychology emphasize the importance of social cognition for group and organizational learning process ( Akgün et al., 2003, Gruenfeld & Hollingshead, 1993 and Higgins, 2000). Because the NPD process in most organizations is in essence a group activity that involves people throughout the organization and their reciprocal interactions, knowledge, behaviors, cognitions, and functional cultures (Madhavan & Grover, 1998), the integration of the social cognition literature into the theoretical articulations of learning in NPD teams might provide a better elucidation of the learning processes and practices as indicated by the future research suggestions of Akgün et al. (2003) and Akgün, Lynn, and Reilly (2002). Accordingly, the present study (i) incorporates the organizational learning theory and the socio-cognitive framework to develop a model of the NPD team learning process and (ii) operationalizes and empirically tests, in a nomological network, the effects of factors from both streams of research on new product success. In doing so, this article aims to provide managers with applicable guidance on how to facilitate the learning process and new product success in NPD teams.

Learning is a broad concept involving different definitions, constructs, epistemologies, and anthologies. Although a broad research base on the subject is in existence, it remains a complex and confusing concept. One goal of this research was to leverage the NPD team learning literature by cross-fertilization with other literatures. In pursuit of this, social cognition was examined. Another goal of this study was to operationalize social cognition and to test it empirically in new product development teams and new product performance. It was shown empirically that team learning process cannot be explained by reducing the scope to one or another element. Rather, learning process is an aggregation of all socio-cognitive components. Furthermore, it was found that team intelligence is the driving force of team information-processing, and that team information-processing has a positive influence on the success of new product projects. At the same time, different information-processing components were examined simultaneously, thus providing evidence as to how teams learn consciously and unconsciously. The socio-cognitive perspective introduced in this research thus constitutes a useful addition to the extant research on the performance of NPD teams.