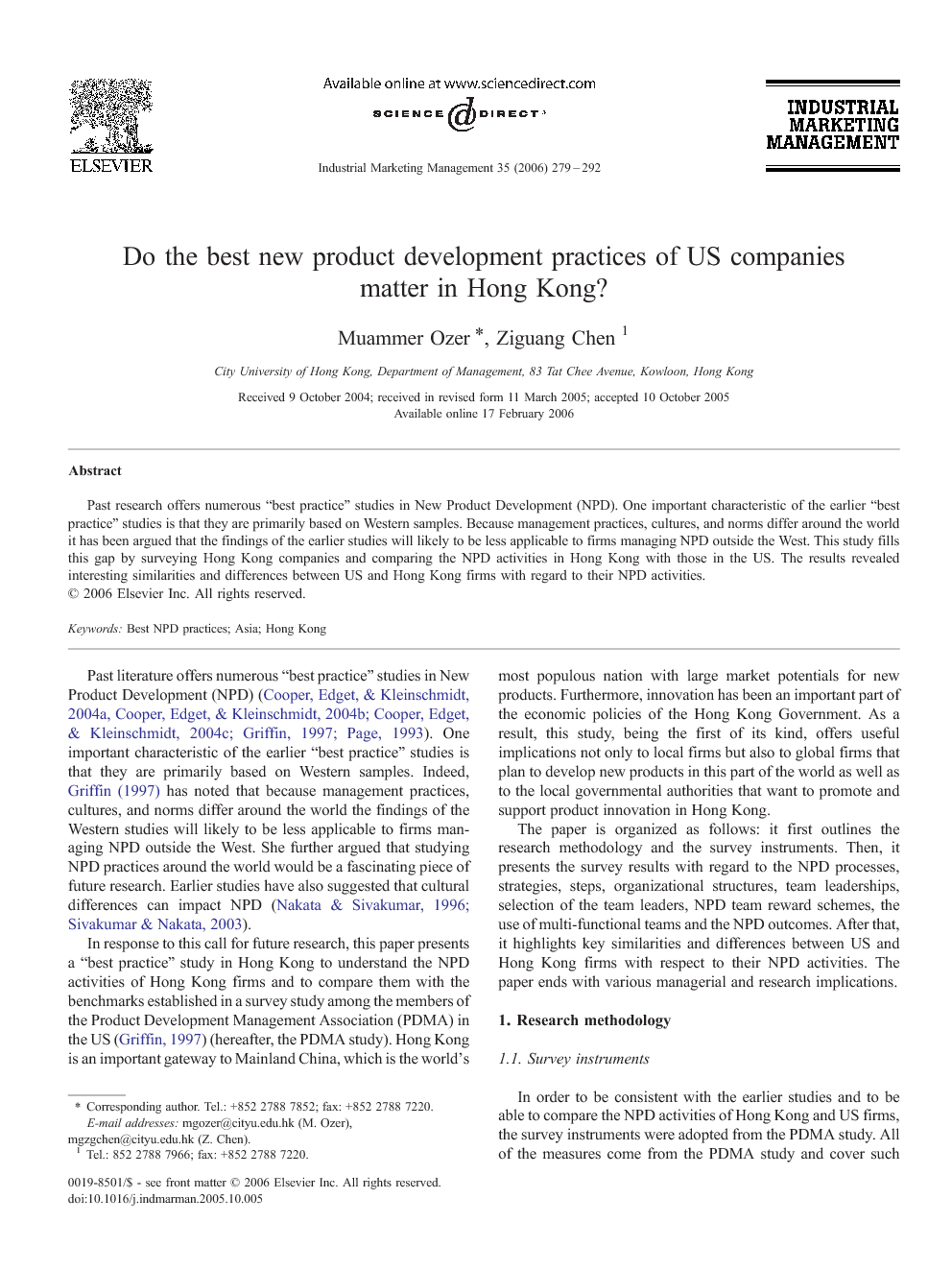 Past research offers numerous “best practice” studies in New Product Development (NPD). One important characteristic of the earlier “best practice” studies is that they are primarily based on Western samples. Because management practices, cultures, and norms differ around the world it has been argued that the findings of the earlier studies will likely to be less applicable to firms managing NPD outside the West. This study fills this gap by surveying Hong Kong companies and comparing the NPD activities in Hong Kong with those in the US. The results revealed interesting similarities and differences between US and Hong Kong firms with regard to their NPD activities.

Past literature offers numerous “best practice” studies in New Product Development (NPD) (Cooper et al., 2004a, Cooper et al., 2004b, Cooper et al., 2004c, Griffin, 1997 and Page, 1993). One important characteristic of the earlier “best practice” studies is that they are primarily based on Western samples. Indeed, Griffin (1997) has noted that because management practices, cultures, and norms differ around the world the findings of the Western studies will likely to be less applicable to firms managing NPD outside the West. She further argued that studying NPD practices around the world would be a fascinating piece of future research. Earlier studies have also suggested that cultural differences can impact NPD (Nakata and Sivakumar, 1996 and Sivakumar Nakata, 2003). In response to this call for future research, this paper presents a “best practice” study in Hong Kong to understand the NPD activities of Hong Kong firms and to compare them with the benchmarks established in a survey study among the members of the Product Development Management Association (PDMA) in the US (Griffin, 1997) (hereafter, the PDMA study). Hong Kong is an important gateway to Mainland China, which is the world's most populous nation with large market potentials for new products. Furthermore, innovation has been an important part of the economic policies of the Hong Kong Government. As a result, this study, being the first of its kind, offers useful implications not only to local firms but also to global firms that plan to develop new products in this part of the world as well as to the local governmental authorities that want to promote and support product innovation in Hong Kong. The paper is organized as follows: it first outlines the research methodology and the survey instruments. Then, it presents the survey results with regard to the NPD processes, strategies, steps, organizational structures, team leaderships, selection of the team leaders, NPD team reward schemes, the use of multi-functional teams and the NPD outcomes. After that, it highlights key similarities and differences between US and Hong Kong firms with respect to their NPD activities. The paper ends with various managerial and research implications.