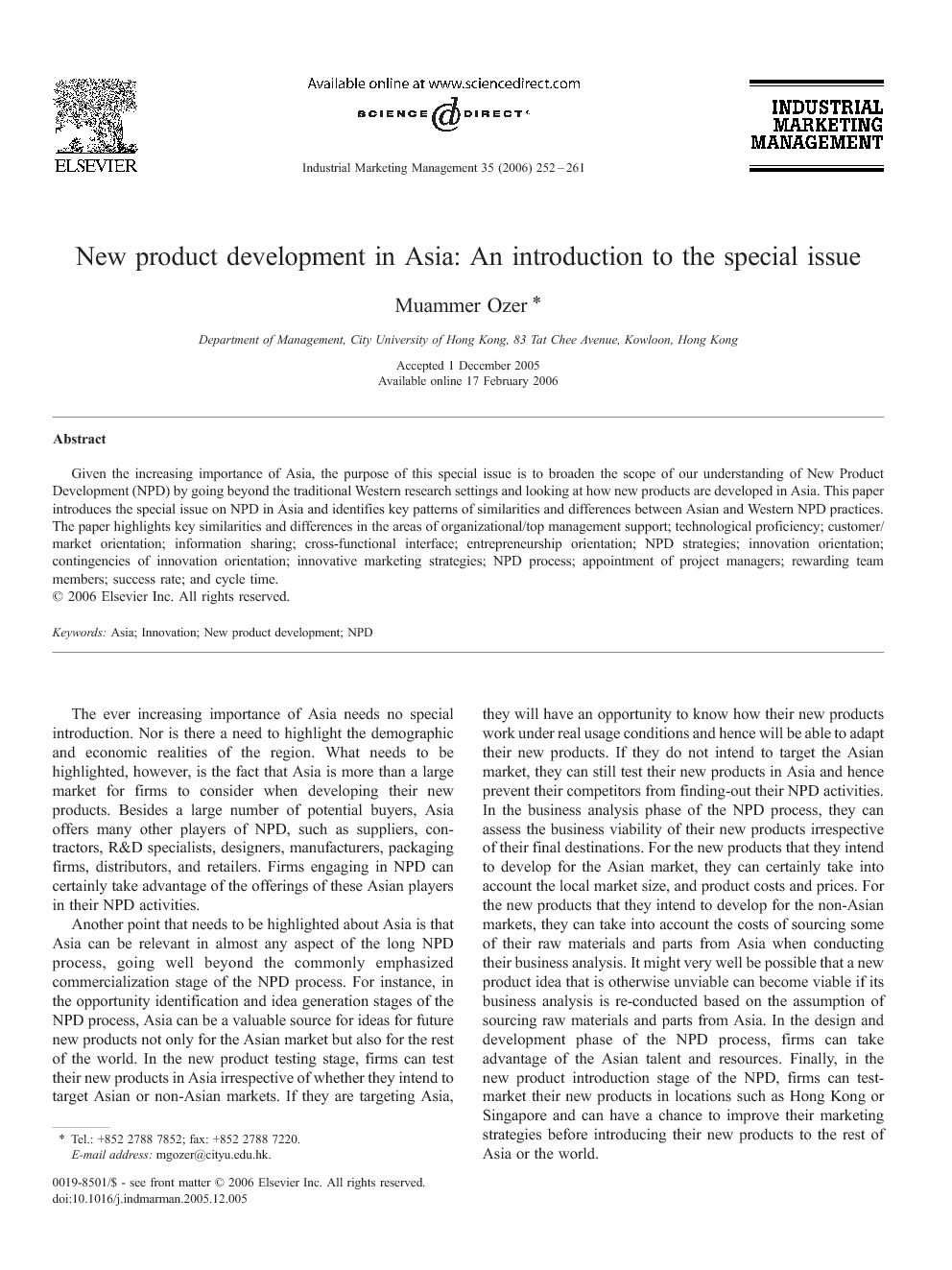 Given the increasing importance of Asia, the purpose of this special issue is to broaden the scope of our understanding of New Product Development (NPD) by going beyond the traditional Western research settings and looking at how new products are developed in Asia. This paper introduces the special issue on NPD in Asia and identifies key patterns of similarities and differences between Asian and Western NPD practices. The paper highlights key similarities and differences in the areas of organizational/top management support; technological proficiency; customer/market orientation; information sharing; cross-functional interface; entrepreneurship orientation; NPD strategies; innovation orientation; contingencies of innovation orientation; innovative marketing strategies; NPD process; appointment of project managers; rewarding team members; success rate; and cycle time.

The ever increasing importance of Asia needs no special introduction. Nor is there a need to highlight the demographic and economic realities of the region. What needs to be highlighted, however, is the fact that Asia is more than a large market for firms to consider when developing their new products. Besides a large number of potential buyers, Asia offers many other players of NPD, such as suppliers, contractors, R&D specialists, designers, manufacturers, packaging firms, distributors, and retailers. Firms engaging in NPD can certainly take advantage of the offerings of these Asian players in their NPD activities. Another point that needs to be highlighted about Asia is that Asia can be relevant in almost any aspect of the long NPD process, going well beyond the commonly emphasized commercialization stage of the NPD process. For instance, in the opportunity identification and idea generation stages of the NPD process, Asia can be a valuable source for ideas for future new products not only for the Asian market but also for the rest of the world. In the new product testing stage, firms can test their new products in Asia irrespective of whether they intend to target Asian or non-Asian markets. If they are targeting Asia, they will have an opportunity to know how their new products work under real usage conditions and hence will be able to adapt their new products. If they do not intend to target the Asian market, they can still test their new products in Asia and hence prevent their competitors from finding-out their NPD activities. In the business analysis phase of the NPD process, they can assess the business viability of their new products irrespective of their final destinations. For the new products that they intend to develop for the Asian market, they can certainly take into account the local market size, and product costs and prices. For the new products that they intend to develop for the non-Asian markets, they can take into account the costs of sourcing some of their raw materials and parts from Asia when conducting their business analysis. It might very well be possible that a new product idea that is otherwise unviable can become viable if its business analysis is re-conducted based on the assumption of sourcing raw materials and parts from Asia. In the design and development phase of the NPD process, firms can take advantage of the Asian talent and resources. Finally, in the new product introduction stage of the NPD, firms can test-market their new products in locations such as Hong Kong or Singapore and can have a chance to improve their marketing strategies before introducing their new products to the rest of Asia or the world. In our call for papers for this special issue, we stated that given the increasing importance of Asia, we aim at broadening the scope of our understanding of NPD by going beyond the traditional Western research settings and looking at how new products are developed in Asia. Theoretically, we intend to understand how and why NPD in Asia differs from that in the rest of the world. We also wish to know whether Asia's unique market and cultural realities have any impact on NPD and its outcomes. Managerially, we hope to offer useful guidelines to both Asian and Western companies with regard to developing new products in Asia. The purpose of this paper is to introduce the special issue on NPD in Asia and to identify some patterns of similarities and differences between Asia and the West with respect to NPD. The following section introduces individual contributions to this issue. After that, key similarities and differences between Asian and Western NPD practices are highlighted. Finally, the supports of an outstanding and dedicated group of reviewers are acknowledged.