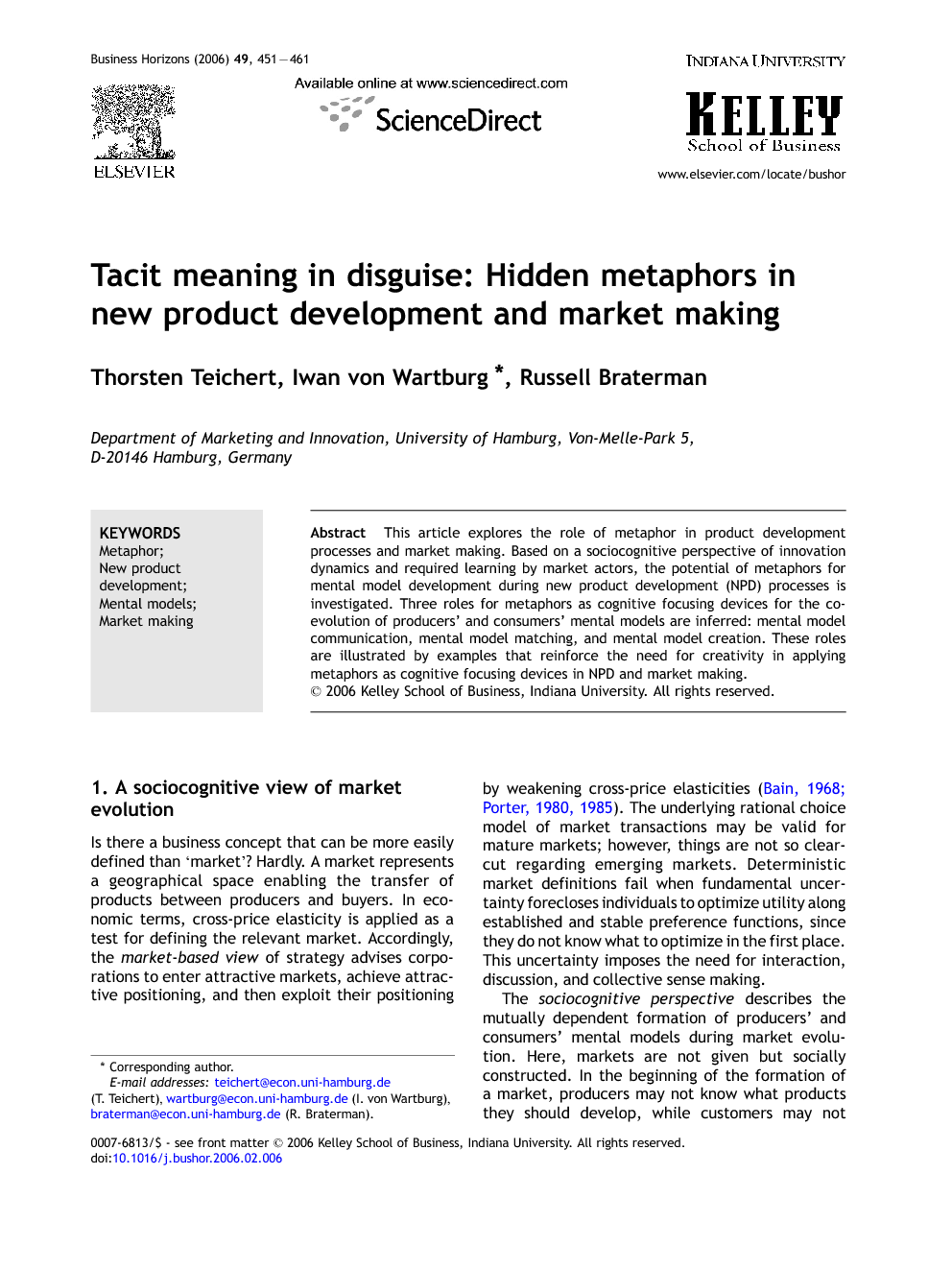 Is there a business concept that can be more easily defined than ‘market’? Hardly. A market represents a geographical space enabling the transfer of products between producers and buyers. In economic terms, cross-price elasticity is applied as a test for defining the relevant market. Accordingly, the market-based view of strategy advises corporations to enter attractive markets, achieve attractive positioning, and then exploit their positioning by weakening cross-price elasticities ( Bain, 1968, Porter, 1980 and Porter, 1985). The underlying rational choice model of market transactions may be valid for mature markets; however, things are not so clear-cut regarding emerging markets. Deterministic market definitions fail when fundamental uncertainty forecloses individuals to optimize utility along established and stable preference functions, since they do not know what to optimize in the first place. This uncertainty imposes the need for interaction, discussion, and collective sense making. The sociocognitive perspective describes the mutually dependent formation of producers' and consumers' mental models during market evolution. Here, markets are not given but socially constructed. In the beginning of the formation of a market, producers may not know what products they should develop, while customers may not know what they can use these products for. This holds because there are no entrenched mental models regarding what new products are all about. Thus, functional details and design aspects may change frequently, addressing fast-moving and heterogeneous customer preferences until a dominant design finally emerges (Utterback, 1994). This process of market evolution requires continual and mutual consumer and producer learning. Besides producers' traditional conduct of research and development (learning by searching, as well as learning by unlearning). Durand (1993) describes three complementary forms of learning: producers' ‘learning by doing,’ consumers' ‘learning by using,’ and ‘learning by interacting’ as continuous feedback between producers and users. In sum, markets co-evolve with the sharing of product knowledge among market actors. Market narratives circulating between different market actors (e.g., manufacturers, customers, standard setting bodies, advertising agencies) act as catalysts for, as well as artifacts of, market evolution (Molotch, 2003). They are primary vehicles for the emergence of new, stable, and shared interpretations of product categories during processes of collective sense making (Rosa & Spanjol, 2005). Stories help market actors determine the value of new products, understand how to sell or use them, and understand how to position them relative to other products. Because of their potential to link disparate knowledge domains together, we posit that metaphors can be powerful cognitive focusing devices for market stories; metaphor acts as a device in a real or imagined discourse, shaping the mental structures of both producers and consumers. In this article, we explore the role of metaphor in NPD, as explained by the sociocognitive perspective of market dynamics and required learning by market actors. We first portray how metaphors can bring life to mental models. Building on both the sociocognitive view and the description of how metaphor works, we then infer three roles of metaphor during NPD and market making.

Given the importance of market stories in the emergence and development of markets, cognitive linguistics devices like metaphor should be paid greater attention in NPD literature, especially that focusing on the fuzzy front end of innovation. Existent literature about analogical reasoning in early new product development stages (Dahl and Moreau, 2002 and Perkins, 1997) seems to be closely related to the issues this article seeks to address; that is, the portrayal of the role of metaphor during the entire new product development process. Two fundamental differences apply here, however: (1) as discussed in Section 2, metaphor goes beyond analogical comparison, and (2) previously analogical reasoning is studied as a creativity method from an internal perspective only. The examples cited in this article illustrate that metaphors can stimulate learning processes, either within a company or externally, and possibly both. Summarizing the conceptual discussion and provided examples, we capture key insights that can be derived from our argument. Of the three roles of metaphors identified in this article, their use in mental model communication occurs furthest downstream in NPD processes. This is the role that is most readily understood and documented, as it is the one most commonly used in everyday marketing practice. Since the basic direction of an NPD project's trajectory is determined in the early stages, it is important to draw on metaphorical producer–customer interaction techniques before a product is developed and fine-tuned for later market introduction. As such, a first and central claim of our argument is that the use of metaphors should not be restricted to late NPD stages, or already established markets or product categories. Rather, it may be envisioned as a sort of process for connecting the three roles introduced. First, metaphors may help elicit deep and valid customer preferences as mental model matching tools. If these preferences do not coincide with the shared assumptions within a manufacturing firm, they may help break up entrenched assumptions that are no longer valid. Second, during later stages of product development, metaphors may be used as mental model communication tools. In order to develop successful innovation streams, companies should try to enable the emergence of radically new markets or product categories; toward that end, metaphors can act as mental model creation devices. In such cases, it may be wise to select potentially advantageous metaphorical content (i.e., to relate aspects of a new product's USP or long-term capability advantage to an existing knowledge domain). A second claim is that, due to the different cognitive processes triggered, metaphors for mental model communication have far more impact than merely the communication of physical product attributes. For example, in many industries, it is not mandatory to provide extensive product detail; however, if a product is threatened by comparison to rival products or if there is significant pressure from price competition, changing customers' mental representation of a product can help sustain a price premium. Thus, when planning communication and market introduction campaigns, the use of metaphors and the use of functional product UPS descriptions should not be seen as a trade-off. Rather, investing a large amount of money in functionally oriented communication may actually call for the use of metaphor to secure the investment in ‘traditional’ marketing activities. Third, it is important to consider how the emergence of shared product knowledge by shaping product metaphors collectively (i.e., as an interactive process between customers and producers) can be facilitated. In this respect, much more research is needed to investigate metaphorical interdependent mental model creation techniques. For the moment, this is more a concept than a method that can be shrink-wrapped and sold over the counter. As the VisiCalc example indicates, however, the very same metaphor of the electronic blackboard served initial product envisioning, as well as early communication of its selling proposition. Conversely, customers could also metaphorically inform producers about latent preferences for not-yet invented or developed products. These metaphors may be refined mutually before serving as the reference point in an early NPD project. These far more reaching roles of metaphor require further exploration. For example, there is the question of familiarity (i.e., how recognizable a metaphor needs to be to be effective). Further, in this article, we have not distinguished between targeted and adaptive metaphors. Targeted metaphors are appropriate only if the envisioned future is known and can be explicated. Adaptive metaphors are appropriate when goals cannot be clearly specified and imply an evolutionary process of testing, exploration, searching, and learning (Sackmann, 1989). Such distinctions in metaphor type and potential role require further review; nevertheless, our explorations to date indicate a substantial potential for further systematic applications of metaphors earlier in the NPD process, something we suggest would help unlock new market opportunities. This can be achieved through creativity in applying metaphor's potential, along with a more differentiated view of its potential roles.